Air India Express flight that took off from Abu Dhabi with 177 Indian nationals on board has landed in Kochi.

The first Air India Express flight took off from Abu Dhabi to Kochi, which was followed by a Dubai-Kozhikode flight of the same airline. Meanwhile, Indian Navy’s INS Jalashwa, also reached the Maldives to bring back stranded Indian citizens.

In other major development, the BS Yeddyurappa-led government has decided to restart train services for migrant labourers, a day after the Karnataka government’s decision to scrap trains ferrying migrants back home attracted criticism from several quarters. The state government has written to nodal officers of various states seeking their consent to operate trains to their states from May 8 to 15.

As far as Covid-19 numbers are concerned, the overall tally in the country has touched 52,952, including 1783 deaths even as the Centre and state governments continued to chalk out lockdown exit strategies after May 17. While there are 35902 active cases at present, as many as 15266 patients have recovered so far. As many as 64 flights and three Navy ships will be operated until May 13 to bring home nearly 15,000 Indians stranded overseas from Thursday.

Meanwhile, Prime Minister Narendra Modi thanked all those in the frontline of the Covid-19 war, saying their selfless work for others during the pandemic is worthy of praise. He said India is standing firmly with those facing difficult times, both in the country and abroad.

WITH 383 new cases, the number of confirmed infections of novel Coronavirus in Gujarat has crossed the 7,000-mark Thursday — more than 1,200 cases were added in the last three days. Twenty-nine deaths were also reported from the state, taking the total toll to 425.

Gujarat has the second highest number of cases and deaths in the country, after Maharashtra. And just as Mumbai contributes a bulk of the cases as well as deaths in Maharashtra, an overwhelming number in Gujarat has been reported from Ahmedabad. Read more here

As the number of COVID-19 cases in Vadodara reached 476, the district and city administration decided to open three more care centres outside the GMERS Gotri facility. Read more here

Gujarat has so far sent back 1.20 lakh migrants, stranded in the state due to the COVID-19 lockdown, to their home states in 101 Shramik Special trains including the 34 trains which will leave the state on Thursday. Read more here

Amid complaints of PDS dealers denying ration to card holders and selling grains in the market by citing problems with the e-PoS system, the Bihar government has asked the dealers not to deny ration to anyone and to use dealer authentication in case of any technical issue. There are 1.68 crore households with ration cards in the state and out of them, 1.02 crore cards are linked to Aadhaar.

Ration dealers, who had threatened to go on strike from May 1 to protest against the e-PoS system, withdrew the strike call after the government issued stern warnings. There are about 42,000 PDS shops in the state. Read more here As part of its COVID-19 containment strategies, Vadodara Municipal Corporation has announced a few steps to identify super-spreaders as well as people flouting the lockdown guidelines. Read more here

Five companies of paramilitary forces arrived in Ahmedabad on Thursday from New Delhi in a special plane after the state government requested the Centre for assistance in the wake of Ahmedabad city entering complete shutdown from May 7 to May 15. Read more here

A large number of commercial sex workers (CSW) in Pune’s red light area at Budhwar Peth want to return home as their source of income is completely suspended due to a nationwide lockdown. However, being in a containment zone, travelling out of Pune is not permitted as of now, while the larger question is: will their families accept them?

Till the beginning of 2019, the approximate number of sex workers in Budhwar Peth was around 3,500. They lived in over 350 brothels and 70-odd buildings in the red light area. Following a police crackdown aimed at rescuing minor girls and those forced into sex work, their number stands at around 2,500 now, as per social organisations working for the welfare of CSWs. Read more here 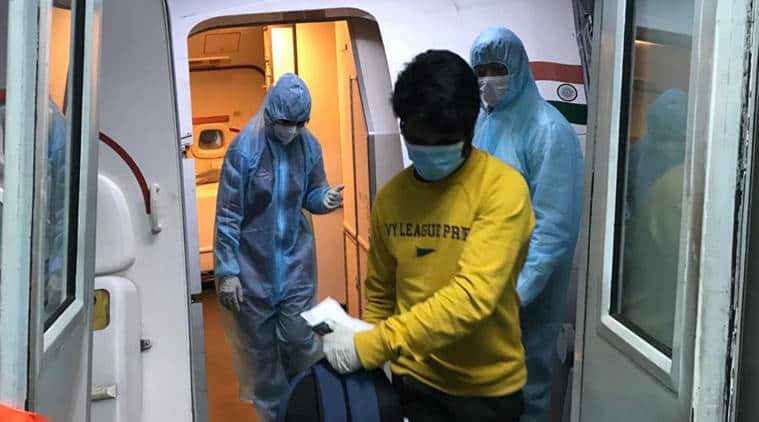 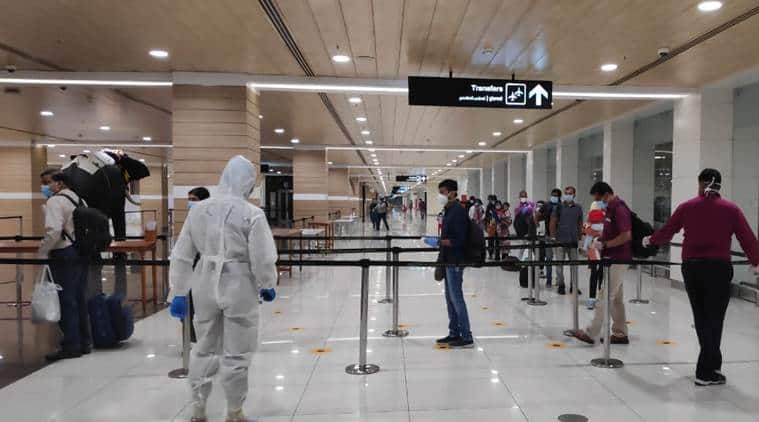 Punjab Chief Minister Capt Amarinder Singh on Thursday urged Prime Minister Narendra Modi to clearly define the way forward for the country’s economic revival and an exit strategy from phase 3 of the lockdown.

In a letter to the PM, the chief minister said, “The exit strategy may not only lay down the parameters to contain COVID-19 within safe limits but should also define the path of economic revival. It should consider and focus on fiscal and economic empowerment of the states.” Punjab was the first state in the country to implement a curfew to check spread of coronavirus. Amarinder has also constituted a task force for chalking out an exit strategy for the state, apart from a panel headed by Montek Singh Ahluwalia. Read more here

Air India Express flight that took off from Abu Dhabi with 177 Indian nationals on board has landed in Kochi.

In just five days as many as 7.74 lakh migrants have applied through a government web portal to return to their native states from Haryana. The state government had launched this website Sunday. On the same portal, nearly 92,000 others have applied to be brought to Haryana from other states.

As of now, official sources revealed, the government has finalised plans to send only 40,000 migrant workers to their native states from Haryana. Officials believe that even those persons have applied on the web portal who are comparatively comfortable at their work places currently. READ MORE

Moreover, 41 more personnel from the force tested positive for Covid-19 on Thursday, taking the total infections in the BSF to 193. Of the 41 new infections, 12 belonged to the company that was deployed to maintain law and order in Jama Masjid and Chandani Mahal areas with Delhi police. This company of 94 personnel now has 73 positive cases.

Among the two BSF personnel who died, one had kidney ailment and had been going through dialysis while the other had no co-morbidities. The latter was 45 years of age and died within two days of developing symptoms. His test results came three days after his death. READ MORE

The Brihanmummbai Municipal Corporation (BMC) Thursday said it has up a committee to verify a purported video of dead bodies kept next to COVID-19 patients in city’s Sion Hospital which went viral on social media. This comes after the BJP hit out at the Sena-ruled BMC over the incident.

In a statement, the civic body said the committee will find out the facts and submit its report in next 24-hours. As per the finding of reports action will be taken against the guilty. Civic body will ensure that no such incidents happens, the statement said. READ MORE

As many as 72 inmates and seven jail officials have tested positive for Covid-19 at Arthur Road jail in Mumbai. This comes a day after an undertrial and two prison guards were tested positive for the same. This is the first time that the coronavirus cases have been detected in a prison in Maharashtra. The jail has nearly 2,600 inmates against a capacity of only 800.

Breaking: As many as 72 inmates and seven jail officials have tested positive at Arthur Road jail in Mumbai @IndianExpress https://t.co/mYJAymhqVe

Meanwhile, the first of the two flights from the UAE carrying 177 Indian nationals left for Kerala, as India began its biggest ever repatriation exercise to bring back its citizens stranded abroad amidst the international travel lockdown over the coronavirus pandemic. A total of 354 Indian nationals, including 11 pregnant women and a pair of twins, will return home Thursday in the two flights from the UAE to Kerala as part of the repatriation exercise named 'Vande Bharat Mission.' For more updates, track our separate live blog on evacuation here

Companies of Border Security Force (BSF), Rapid Action Force (RAF) and Gujarat Police conducted a flag march at Delhi Darwaza in old city Ahmedabad on Thursday evening as the city enters first day of the complete shutdown to control the spread of Covid-19. Civic authorities of Ahmedabad and Surat decided to close all shops except those selling milk and medicines for a week. While order came in effect from May 7 midnight in Ahmedabad, it will be enforced from Saturday in Surat. As many as 27 people succumbed to the virus in Gujarat on Wednesday — 25 of the deaths were from Ahmedabad. (Express Photo by Javed Raja) India lockdown, Day 44: At a glance 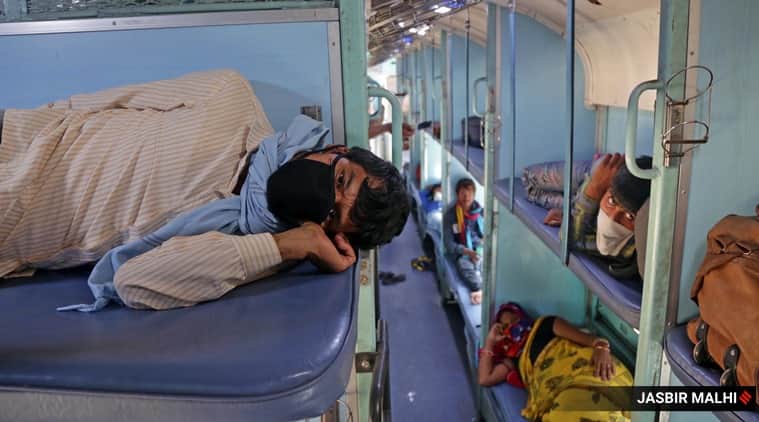 A group of 13 migrant workers reached Jamnagar railway station in Gujarat on Wednesday evening after being stranded in the state for over 40 days. However, they were heartbroken when they found out that they won’t be able to board the Shramik Special train headed towards Uttar Pradesh, as they didn’t have the money to purchase the tickets. At that moment, Jamnagar Police stepped up and purchased train tickets for 13 of the workers. They ensured that the workers board the train and reach their homes by Thursday. Read more here

With Indians stranded in the Middle East to be evacuated from Thursday, elaborate safety measures have been put in place at Cochin International Airport Limited (CIAL), where the first flight from Abu Dhabi is expected that night.

Medical college Resident Medical Officer Dr Ganesh Mohan said, “We trained them in using PPE suits and wearing face shield on board and handling health emergencies on flight. They were also trained in infection control practices. The demonstrations were held as per the protocol, and they were given PPE kits,” he said.

Starting Thursday, the evacuation process will continue for a week with over 14 flights coming in from Malaysia, Bangladesh, Saudi Arabia, USA, Philippines and Singapore. The first flight is from Malaysia with over 250 passengers. Airport authorities have stated that the flights will land at Terminal 3. Out of the 14 flights, three are connecting flights — they will land in Delhi and proceed to Bengaluru/ Hyderabad.

As per the flight plan prepared by the External Affairs Ministry, the Delhi Airport won’t see more than three evacuation flights a day. Passengers will first be screened, then sent to quarantine centres. After two weeks, they will be sent to their hometowns.

To hold NEET amid pandemic, NTA to double test centres

The National Testing Agency (NTA), The Indian Express has learnt, has been asked by the HRD Ministry to double the number of test centres to maintain social distancing during the exam.

Following government directions, the NTA is now planning to seat two candidates two metres apart, which, in other words, means it will need roughly 6,000 test centres, as opposed to the originally planned 3,000, to accommodate 15 lakh NEET aspirants. Till last year, two candidates were usually seated at a distance of one metre.

China on Wednesday dared US Secretary of State Mike Pompeo to show the “enormous evidence” he has to prove that the novel coronavirus originated from a lab in Wuhan and asserted that the matter should be handled by scientists instead of politicians out of their domestic political compulsions in an election year.

In recent days, US President Donald Trump and Secretary of State Pompeo have claimed that the deadly virus originated from the Wuhan Institute of Virology in the central Chinese city of Wuhan, where the outbreak was first detected last December. The two leaders have also said that China has refused to give international scientists access to learn what happened.