Private hospitals, which account for two-thirds of hospital beds in India, and almost 80 per cent of available ventilators, are handling less than 10 per cent of this critical load. Of the thousands of COVID-19 patients admitted in hospitals around the country, just around 800 are critical, requiring either oxygen support, ventilators or treatment in ICUs (Intensive Care Units). Private hospitals, which account for two-thirds of hospital beds in India, and almost 80 per cent of available ventilators, are handling less than 10 per cent of this critical load.

This is just one symptom of a larger trend over the last theree months: the Rs 2.4-lakh-crore private health care sector has largely been relegated to the sidelines, watching the public health care system — government hospitals, doctors, nurses and paramedics — battle the Covid pandemic.

Behind this are a set of circumstances that range from the nature of government policy on managing the pandemic to decisions taken by the hospitals themselves.

From being sealed in the early stages after their staff tested positive, like Wockhardt in Mumbai or the private hospital in Bhilwara, to refusing to admit patients, from suspending services to playing safe, private hospitals aren’t pulling their substantive weight. 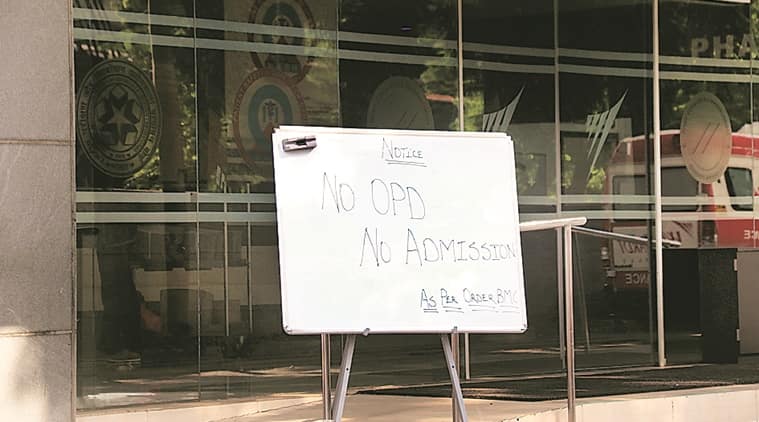 Nationwide, private hospitals employ four out of every five doctors, but the refrain from several cities and towns amid the pandemic is that they are locking themselves down even when it comes to providing non-Covid health care.

From Patna to Mumbai, private hospitals cite many reasons to explain their near absence: lockdown restrictions, lack of internal protocols to handle the pandemic, fear of infection to their own doctors and nursing staff, unwillingness to risk the business from non-Covid patients, or even the government’s own ambiguity in co-opting the private sector.

But, fallen off the radar, they have.

Bihar, in fact, witnessed an “almost complete withdrawal” of the private health sector, which has nearly twice the bed capacity of public facilities.

This was particularly significant also because all three hospitals handling Covid cases in Patna are government hospitals. Vikash R Keshri, Senior Research Fellow, The George Institute for Global Health, said it was also “surprising” since the number of people relying on private healthcare over public for both outpatient and in-patient services in Bihar is “far higher”. Private hospitals have 47,000 beds in the state compared with 22,000 of public hospitals.

“The public sector remains the mainstay of the Covid response. The private sector response has been variable. They have expressed interest but to what extent they are actually providing support required needs to be gauged,” said K Srinath Reddy, President, Public Health Foundation of India.

Before the outbreak, the private sector accounted for nearly 70 per cent of critical procedures like chemotherapy and dialysis, according to Indu Bhushan, Chief Executive Officer, Ayushman Bharat-Pradhan Mantri Jan Arogya Yojana and National Health Authority. Yet, “a lot” of these private establishments treating even non-Covid cases had shut down in certain states citing increased costs and reduced footfalls, he said.

In Mumbai, the city with the largest number of Covid cases, and also the most deaths, The Indian Express has reported how patients were turned away from one hospital to another, and even Covid-positive patients have had to wait for hours before they could be admitted. 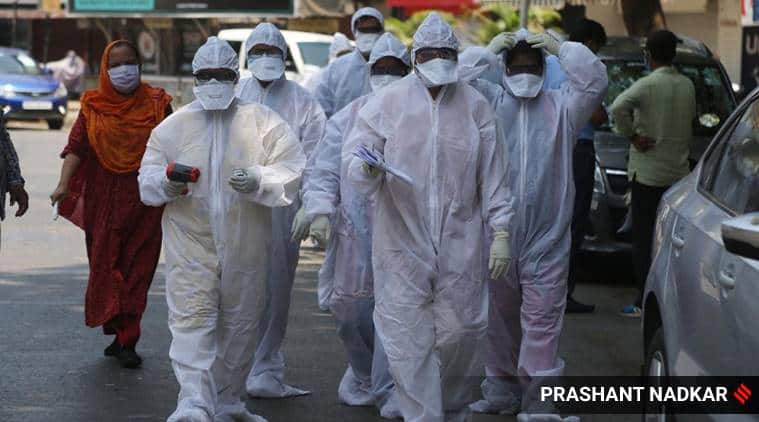 Many hospitals in Mumbai do not admit COVID patients, fearing they would be sealed by BMC

Maharashtra did not bar private hospitals from treating Covid patients but many would just not admit patients with Covid symptoms, fearing they would be sealed by the Municipal Corporation of Greater Mumbai (BMC).

“In Mumbai, BMC is managing 80 per cent load of patients; the private hospitals are handling 20 per cent,” said Suresh Kakani, Additional Municipal Commissioner. Of the 4,574 active cases on Tuesday, 400 patients were admitted in private hospitals, whereas 1,600 were in public hospitals. The remaining 2,500-odd were asymptomatic, not requiring admission.

In fact, as on date, Maharashtra has 187 critical patients, of which Mumbai alone accounts for about 120-125, most of whom require just oxygen support. A split of patients requiring critical care between private and public hospitals was not immediately available.

In India, there are three levels of COVID facilities. The first level comprises quarantine facilities in stadia, hostels, schools and lodges, called Covid Care Centres. This is where most Covid-positive patients are kept. The second and third levels are hospitals with oxygen support, ventilators and ICU facilities. Some patients who show symptoms, which are not very severe, but yet require medical attention, may also be admitted in hospitals.

According to Indian Council of Medical Research, 80 per cent cases in the country show either mild symptoms or are asymptomatic — the latter comprising 69 per cent of all cases. These cases generally do not require hospitalisation, and can return home after quarantining themselves for two weeks in Covid Care Centres.

Given the complaints from patients in the city, the municipal corporation had on April 25 issued a circular asking all nursing homes and private clinics to open up. On Monday, the state government held extensive discussions with private hospitals, nursing homes and even clinics in Pune.

Subhash Salunkhe, Technical Advisor to the Chief Secretary of Maharashtra, told The Indian Express, “They are afraid for obvious reasons. They are involved but they can participate further. The Health Minister and the Chief Minister have already assured assistance for Personal Protective Equipment to hospitals and nursing homes.”

In Delhi, which has over 3,300 cases, government hospitals are handling almost double the number of ICU patients.

Senior officials in the Delhi government’s health department said they had received several complaints of private hospitals refusing treatment to patients during the lockdown, and later of compelling patients to get a Covid-negative test report before dialysis.

This prompted the state to issue an order on April 15 warning hospitals and nursing homes in the city of strict action, including cancellation of registration.

While private facilities may seem to have remained conspicuously absent, especially in certain high burden states, it is not without any reason, say senior executives.

In some cases, facilities are ready and waiting, but some states like Uttar Pradesh have kept them on standby. In a few instances, states like Telangana did not “fully support” the role of the sector initially, either in testing or treatment.

“There was even a time when they (Telangana government) said ‘send all your positive patients (to government facilities)’. Now, I think they have realised that in treatment, they need private hospital support. But I think this is just one or two governments. With most of the other governments, there’s a great partnership role being played,” said Sangita Reddy, Joint Managing Director of Apollo Hospitals Enterprises, India’s largest hospital chain.

“I think the private sector has been trying to step up. There was the initial fear — some hospitals got shut down… and with smaller nursing homes also, there were some who were worried. But I think everybody is now ramping up,” said Reddy, also the President of the Federation of Indian Chambers of Commerce and Industry (FICCI).

The sector’s biggest pain point, though, is their struggle to operate facilities at a time when their costs have increased, but their revenues have seen a dip.

“I feel very strongly about people trying to pull private sector hospitals down at this point in time, especially when some of us have been trying to continue operations despite incurring operating losses,” said Abhay Soi, CMD, Radiant Life Care and Chairman, Max Healthcare.

Said C K Mishra, chairman, of Empowered Group 2, that is in charge of hospital facilities and testing: “The private sector has been assisting the government and it is a very welcome step. Perhaps, we should look forward to more and more private-sector facilities joining the government.”

(With inputs from Astha Saxena, Ashish Aryan and Shivam Patel in New Delhi)

Minority institution rights not above law or absolute: SC rules on CMC-NEET