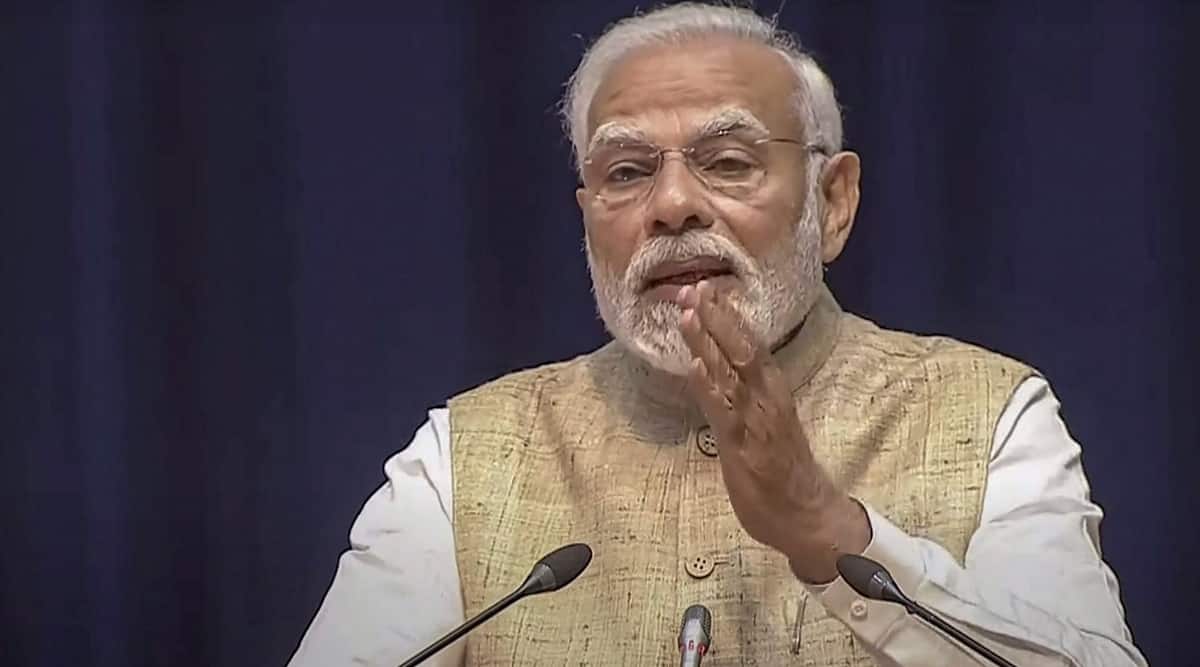 Prime Minister Narendra Modi Saturday said the Supreme Court was taking a lot of steps to ensure timely justice for all. Speaking at the Constitution Day celebrations in the Supreme Court, PM Modi also said the entire world was looking at India which is witnessing rapid development and economic growth.

“We the People in the Preamble of the Constitution is a commitment, pledge and belief that has made India the Mother of Democracy,” the PM said, news agency PTI reported. He also stated that the judiciary was “taking a lot of steps such as e-initiatives to ensure timely justice for all.”

Earlier in the day, he paid homage to “those greats who gave us our Constitution” and reiterated his commitment to fulfilling their vision for the nation.

Today, on Constitution Day, we pay homage to those greats who gave us our Constitution and reiterate our commitment to fulfil their vision for our nation. pic.twitter.com/eKVwA7NdaB

The Prime Minister also said that fulfilling fundamental duties should be the first priority of citizens to take the nation to greater heights as it marches ahead towards the centenary of its Independence. Quoting Mahatma Gandhi, Modi said that fundamental rights were those responsibilities that should be fulfilled by citizens with utmost dedication and true integrity. “Be it an individual or institutions, our duties are our first priority. The Amrit Kaal is the era of duties for us,” the PM said.

“Today, the world is looking at us with great expectations. Today, this country is moving ahead with full potential, taking pride in all its diversities and our biggest strength behind this is our Constitution. Today, the country is being empowered with the power of Pro-People. Laws are being simplified for the common man. This nectar period of freedom is the ‘duty period’ for the country. Be it individuals or institutions… Our responsibilities are our first pledge,” the PM added.

Addressing a programme on Constitution Day at the Supreme Court. https://t.co/pcTGKhucYc

Mentioning that new opportunities are coming up before India, the PM said: “Crossing all hurdles, it’s going ahead. A week from now, India will get the G20 presidency. It’s big! As Team India, all of us should enhance India’s prestige before the world and bring its contribution before them. It’s our collective duty,” news agency ANI reported.

Stating that there was a need to strengthen India’s identity as the ‘Mother of Democracy’, Modi said: “The spirit of our constitution is ‘Youth Centric’. Today, on Constitution Day, I would also make a request to the country’s judiciary that debate and discussion should be increased in order to increase the understanding of the constitution among the youth.”

Modi also remembered the victims of the 26/11 Mumbai terror attacks that took place in 2008 as India was celebrating the adoption of the Constitution.

Meanwhile, as India celebrated the Constitution Day (Samvidhan Divas) on Saturday, several senior politicians took to social media to extend their greetings to fellow citizens and pay tributes to all those involved in the making of the Constitution.

In a tweet in Hindi, Union Home Minister Amit Shah said: “Constitution is the life force of Indian democracy which not only gives equal rights to every citizen, but also gives them an opportunity to move forward by protecting those rights. I bow down to all the great personalities who contributed to the making of the Constitution and wish the countrymen a very Happy Constitution Day.”

Extending best wishes to all countrymen, BJP president J P Nadda said that the Constitution is the basis of unity, integrity and progressiveness of India’s democracy. “Today, in Amritkal, our country is moving fast in the direction of ‘Ek Bharat – Shreshtha Bharat’ with the resolve to imbibe ‘Panch Prana’,” he added.

Quoting Dr Babasaheb Ambedkar, Congress president Mallikarjun Kharge said “the Constitution is not a mere lawyers’ document, but a means of living and its spirit remains the same always.”

He further sad: “We remember the valuable contribution of all the great leaders of the Constituent Assembly. Best wishes to all the countrymen on Constitution Day.”

Claiming that the Constitution of India is “under attack today”, the Congress party said: “While the ruling government is out crushing the soul of our democracy, we pledge to stand strong against the assault on our Constitution and uphold its values.”

The Constitution of India – the custodian of our liberties is under attack, today. While the ruling govt is out crushing the soul of our democracy, we pledge to stand strong against the assault on our Constitution and uphold it’s values.#ConstitutionDay pic.twitter.com/kmcqya5unK

Babasaheb urged us to march on the road to unity.

I will walk that road long enough, until every word of our Constitution is upheld, and every citizen stands protected by fairness and justice. pic.twitter.com/OUMCJKugxj

“Protecting the Constitution of the country, we will give our whole life to fulfil the dreams of Babasaheb and to make India the No. 1 country in the world,” he added.

Meanwhile, Union Law Minister Kiren Rijiju urged the citizens to “take a pledge to commit ourselves to the fundamental values of our democratic nation and honour the principles of Justice, Liberty, Equality & Fraternity enshrined in our Constitution.”

While speaking at an event held on the Supreme Court lawns on the eve of Constitution Day, Rijiju had pitched for fraternal ties between the two pillars of democracy, saying they are like brothers and should not fight each other.

On the auspicious occasion of our 73rd #ConstitutionDay, let us all take a pledge to commit ourselves to the fundamental values of our democratic nation & honor the principles of Justice, Liberty, Equality & Fraternity enshrined in our Constitution. pic.twitter.com/IjAtMMvIfr

According to news agency PTI, he said the central government under Prime Minister Narendra Modi has never undermined the authority of the judiciary and will always ensure its independence remains untouched and is promoted.

Pointing out that India’s forward march in Amrit Kaal is on the firm ground of values enshrined in the Constitution, Union Minister of Textiles, Commerce and Industry, Consumer Affairs, and Food and Public Distribution, Piyush Goyal said: “This day, let us remember and salute its makers for their steadfastness and foresight that gave us this living document in 1949.”

Greetings to all on #ConstitutionDay.

India’s forward march in Amrit Kaal is on the firm ground of values enshrined in our Constitution.

This day, let us remember & salute its makers for their steadfastness & foresight that gave us this living document in 1949. pic.twitter.com/dKg78eeEYF

Union Health Minister Dr Mansukh Mandaviya urged the citizens to pledge to work towards building India of the dreams of the Constitution makers and “rededicate ourselves to the values enshrined in our Constitution for the progress & prosperity of the country.”

Greetings to all on #ConstitutionDay.

We pay tributes to our great constitution makers.

Let us all pledge to work towards building India of their dreams & rededicate ourselves to the values enshrined in our constitution for the progress & prosperity of the country. pic.twitter.com/IDuq2zuASp

Uttar Pradesh Chief Minister Yogi Adityanath also extended his hearty geeting to the people of his state on the occasion of Constituion Day.

BJP national secretary Y Satya Kumar requested the people of India to “strive not only to be vigilant about our rights but also follow our fundamental duties in order to live the true spirit of the constitution. My salute to Dr Ambedkar for giving us such a forward looking constitution. Jai Samvidhan!”

Odisha Chief Minister Naveen Patnaik also paid tributes to the visionaries who framed the Constitution of India and said: “On Constitution Day, [let’s] reaffirm our commitment to uphold the ideals enshrined in the Constitution in letter and spirit and perform the fundamental duties diligently (sic).”