Without the Gandhis, can’t (operate), must take guidance: Mallikarjun Kharge

Not level playing field, says Tharoor, points to ‘some deficiencies in system’ 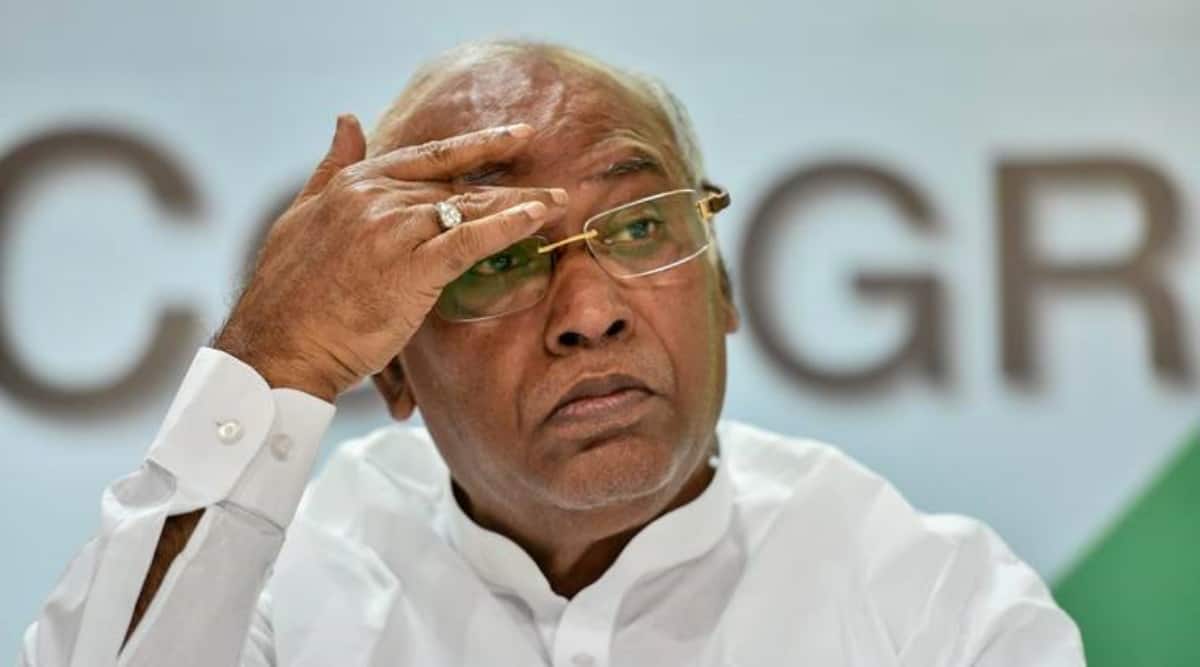 Mallikarjun Kharge, the frontrunner in the Congress leadership race, said on Thursday that he may not consult the Nehru-Gandhi family on every decision, but would seek their “guidance” and “suggestions”, pointing out that Sonia and Rahul Gandhi have experience helming the party.

He said there was nothing to be ashamed about in seeking their counsel as he believed in a collective approach, not an individualistic style of functioning.

Must Read |Cong presidential election: Mallikarjun Kharge says will ensure 50% party positions kept for those under 50

In an interview to The Indian Express, amid campaigning for the October 17 election, Kharge said Sonia is a “key player” in the Congress, and the party cannot work without the guidance and advice of the Gandhis. He was, however, noncommittal on whether his presidency would see elections to the Congress Working Committee (CWC) after 25 years, saying he would be guided by the spirit of consensus. The priority for him, he said, is to implement the organisational reforms announced at the chintan shivir in Udaipur.

Kharge’s challenger, Shashi Tharoor, meanwhile, alleged that it was not a level playing field. The Tharoor camp had earlier approached the election authority headed by Madhusudan Mistry, drawing attention to some state party presidents violating guidelines by openly endorsing Kharge’s candidature and pointing out discrepancies in the list of PCC delegates who form the electoral college.

Subscriber Only Stories
View All
ExplainSpeaking: How to evaluate a Union Budget
Mahesh Vyas writes: Why the job shortage is for real
Delhi confidential: Focus On Projects
Gandhi to Tagore: At old St Stephen’s campus, a glimpse into remnants of ...
Apply New Year promo code SD25
Read |Sanjay Jha writes: The unofficial official candidature of Mallikarjun Kharge – how Congress has failed itself

Kharge said that as Congress president, he would “take everybody into confidence” and implement issues on which there is consensus. “I will take cooperation from everybody. If somebody refuses to give, that is a different thing. My effort would be to involve everybody… That is, after the (Congress presidential) election. My manifesto now is whatever direction has already been given, we have to first implement it to bring change,” he said.

Asked how a non-Gandhi presidency would work, he said: “Without the Gandhis, you can’t (operate)… you have to take their guidance. They have sacrificed for this country. Even the positions (they have taken)… When Mrs (Sonia) Gandhi got a majority, many people asked her to lead the government. She didn’t. Here, we people are fighting for small elections, and small positions…”

Asked if he would consult the Gandhis on each decision, Kharge said: “It is not necessary each and every (time). But the long experience of Sonia Gandhi, 20 years as party president… two years of Rahul Gandhi… they know the people in every nook and corner of the country… They have done good things like the food security Act, compulsory education, NREGA, RTI, all these Acts were brought by Sonia… You want that I should not take guidance from her? She is a key player in the Congress. It is not (about) simply a family, but commitment to a certain ideology… and that work and ideology have helped the country have peace, equality and liberty.”

Asked if he would face pressure to assert his independence, he said: “The question of asserting, or not asserting does not arise. To run the party effectively, to strengthen the party, whenever guidance is required or suggestions, we will take them. And we will approach (them) also”.

Meanwhile, asked if he felt there was a level playing field, Tharoor, while addressing a press conference at the Delhi Congress headquarters, said: “I have nothing against (Madhusudan) Mistry. We all know there are some deficiencies in the system. After all, elections have not been held for 22 years. We got a list (of PCC delegates) on September 10 and we got another list last Wednesday. The first list did not have telephone numbers… Then we got the telephone numbers but there was a difference in the two lists… Such gaps were there. I am not complaining that it is being done deliberately. The problem is that elections were not held for several years, so some mistakes crept in.”

He said while Mistry and his team were trying to hold a “fair and free election”, it “is clear that there are some deficiencies in the system.”

Advertisement
In Premium Now |Shashi Tharoor: ‘I don’t think everyone who voted BJP in 2014, 2019 is a diehard Hindutvawadi; we need to bring them back’

“In many places…you must have seen…PCC president, CLP leader and other big leaders have welcomed Kharge saab, sat with him, people have been called for the meetings, directions have been issued from the PCC to turn up saying Kharge saab is visiting… And naturally it was done for only one candidate. It was not done for me.”

“Many times, when I visited the PCC… the president could not make himself available that day… And I met ordinary workers happily. I am not complaining. I know the value of the vote of an ordinary worker and a big leader is the same. So it doesn’t make any difference to me. But if you are asking whether there is a level playing field…do you think there is no difference in the treatment.”

The election authority, meanwhile, came out with yet another directive. It said AICC general secretaries, state in-charges, secretaries and joint secretaries should not cast their vote in their assigned state. “You are requested to cast your vote either at your home state or at AICC office, as per your choice,” Mistry said in the letter.