Amit Shah met Rajnath at his residence this morning. Newly-elected NDA leaders are likely to meet today, a day after the distribution of portfolios to the 57-member Council of Ministers.

Owaisi had reacted sharply to Minister of State (MoS) for Home Affairs G Kishan Reddy’s remark claiming Hyderabad as a ‘safe zone for terrorists’. “An MoS speaking like this! This shows their hatred for Telangana, Hyderabad. Such irresponsible statements don’t suit a minister, but we expect this from him. Wherever they see Muslims, they take them for terrorists. We can’t cure them,” he had said.

No intention of imposing any language: Govt dismisses fears of Hindi imposition in Tamil Nadu

After political parties in Tamil Nadu protested over the recommendations of new draft education policy submitted to the government that suggested making Hindi a mandatory third language in schools, I&B Minister Prakash Javadekar Saturday said the Centre has no intentions of imposing any language on anybody.

“There is no intention of imposing any language on anybody, we want to promote all Indian languages. It’s a draft prepared by committee, which will be decided by govt after getting public feedback,” ANI quoted Javadekar, the former HRD minister as saying.

The BJP will send 10 lakh post cards with "Jai Shri Ram" written on them to West Bengal Chief Minister Mamata Banerjee, a party leader said Saturday, in a move likely to add salt to the ruling TMC's wounds after a bruising performance in Lok Sabha polls.

Owaisi had reacted sharply to Minister of State (MoS) for Home Affairs G Kishan Reddy remark claiming Hyderabad as a 'safe zone for terrorists’. “An MoS speaking like this! This shows their hatred for Telangana, Hyderabad. Such irresponsible statements don’t suit a minister, but we expect this from him. Wherever they see Muslims, they take them for terrorists. We can’t cure them,” he had said.

State party leaders in Tamil Nadu Saturday reacted sharply over the alleged attempts to impose Hindi as the third language in the state by the Centre. DMK leader T Siva in Trichy said the attempt to force Hindi language on people of Tamil Nadu will not be tolerated by its people. "We are ready to face any consequences to stop Hindi language being forced on the people here," ANI quoted him as saying.

Actor and Makkal Needhi Maiam leader Kamal Haasan said, "I have acted in many Hindi films, in my opinion Hindi language should not be imposed on anyone."

Will be happy to cooperate: Praful Patel on ED notice

Owaisi on G Kishan Reddy's statement: Wherever they see Muslims, they take them for terrorists

AIMIM leader Asaduddin Owaisi Saturday took strong offence to MoS (Home) G Kishan Reddy's statement alleging Hyderabad a 'safe zone for terror'. "An MoS speaking like this! This shows their hatred for Telangana, Hyderabad. Such irresponsible statements don't suit a minister, but we expect this from him. Wherever they see Muslims, they take them for terrorists. We can't cure them," ANI quoted the Hyderabad MP as saying.

"I'd like to ask him that in last five years how many times have NIA, IB and RAW gave in writing that Hyderabad is a safe zone for terror? It is unfortunate the he is saying such things," he added.

Owaisi also said that Hyderabad is a growing city where people are living in peace and harmony. "Since past five years there is peace here, there are no communal riots, religious festivals are peacefully celebrated, it is a growing city and he is speaking like that. What enmity do they have with Telangana, Hyderabad? Do they not like that it is growing?" he said.

Defence Minister Rajnath Singh has instructed Defence Ministry officers to prepare detailed presentations on all divisions and departments under him and set time bound targets to achieve the desired outcome, ANI reported.

What is Leader of Opposition?

With an addition of just eight seats, it is likely Congress will not get the Leader of Opposition status. In order to get the LoP status, a party should have 55 MPs out of the 543 Lok Sabha seats. The Congress, however, won 52 seats, three short the numbers required for the post.

Meanwhile, newly-appointed CPP leader Sonia Gandhi will have the responsibility to elect Congress' leader in Lok Sabha. In the 16th Lok Sabha, Mallikarjun Kharge was the leader in the lower house representing Congress, however, Kharge failed to win the polls this time.

We will not claim LoP till we have strength of 54, onus lies on govt to designate party formally: Congress' Surjewala

Ministers of State in the Ministry of Home Affairs, G Kishan Reddy and Nityanand Rai take charge. Rai won from Ujiarpur by a margin of over 2.75 lakh votes. He represented Hajipur Assembly segment from 2000 till 2014 and contested the 2014 Lok Sabha polls successfully from Ujiarpur. As he offered challenge to the RJD in the Hajipur region with sizeable Yadav population, he has emerged as a Yadav face of BJP and is now the BJP state president.

The appointment of Narendra Singh Tomar as Union Minister in charge of both agriculture and rural development marks the start of an effort to integrate two departments that have tended to work in isolation with markedly varying performance.

The success in the rural sector has, however, not been seen vis-a-vis agriculture. Part of it has to do with the lack of imagination and focus: the flagship rural development schemes have been well-funded. Moreover, they have been target-oriented with clear deadlines and dashboards tracking implementation on a near real-time basis. The same sense of purpose and scale has been missing in agriculture-specific programmes. READ MORE

Narendra Singh Tomar takes charge as the Minister of Agriculture and Farmers Welfare. He won from Morena by a margin of over 1.13 lakh votes. Tomar began his political career as a councillor in Gwalior Municipal Corporation. He was elected to MP Assembly in 1998 and 2003. Tomar was elected to Rajya Sabha in 2009. In May 2009, he was elected to Lok Sabha from Morena. He was Union minister for Steel, Mines, Rural Development and Panchayati Raj portfolios in the previous Narendra Modi government. Served as a minister in MP government earlier.

What are the key ideologies expected under Shah's regime?

Amit Shah is expected to push key ideological projects of the Sangh Parivar, which include National Register of Citizens (NRC). The Citizenship (Amendment) Bill could see a renewed push under his leadership. Issues of abrogation of Article 370 and Article 35 A in Kashmir could also see a more pro-active Home Ministry.

During the election campaign, the then party chief, Shah spoke around issues related to national security, illegal immigration, special privileges available to Kashmir and border security — all hot button subejcts that fall under the purview of his Ministry. READ MORE In her speech, Gandhi lauded the role of Rahul Gandhi during the Lok Sabha elections and said he led the "party from the front with dynamism". She added that the party with its 52 MPs in Lok Sabha will play the role of the opposition sincerely and raise people's issues. Rahul Gandhi congratulated his mother Sonia Gandhi on being elected as the leader of the CPP and said under her leadership, Congress will prove to be "strong and effective" opposition party that will fight to defend the Constiution of India. 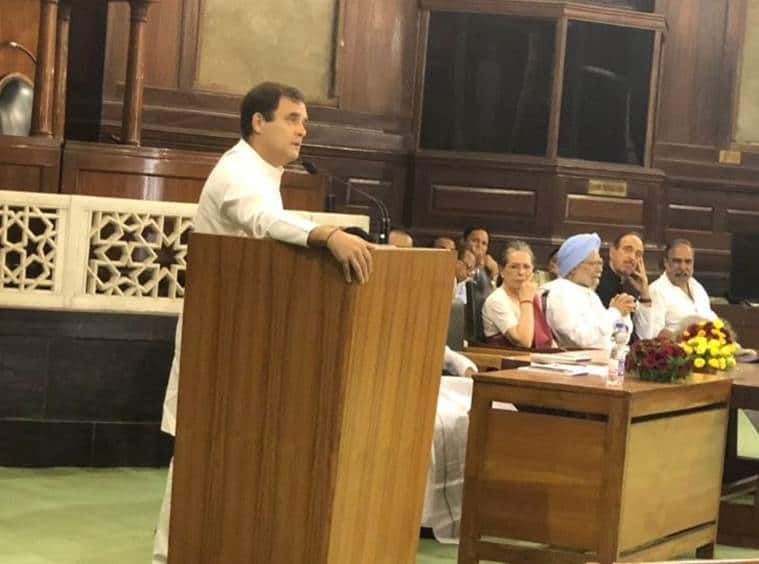 Former foreign secretary S Jaishankar was given the charge of the External Affairs ministry on Friday. With the new responsibility, Jaishankar is a surprise entrant to PM Narendra Modi’s Cabinet, which took oath on Thursday. Jaishankar becomes part of a long line of career diplomats taking the political plunge. The former US Ambassador has been one of the most active diplomats in the Modi government and steered the government’s agenda across the world. A 1977 batch Indian Foreign Service Officer, Jaishankar has previously served as Indian ambassador to US (2014-15), China (2009-13) among other European nations, and had a major role in the negotiation of the ambitious India-US civil nuclear agreement. The longest-serving foreign secretary is credited for forming the crux of Modi’s foreign policy in his first term as the prime minister.

Thank you all for the best wishes!
Honoured to be given this responsibility.
Proud to follow on the footsteps of @SushmaSwaraj ji Each one of you is fighting for the Constitution: Rahul Gandhi to Congress members

Responding to her mother re-election as the CPP leader, Congress chief Rahul Gandhi thanked the voters and said every party member must remember that "each one of you is fighting for the Constitution, for every person in India irrespective of the color of his skin or belief".  He further thanked his party workers as well.

Sonia Gandhi has been elected as the leader of the Congress Parliamentary Party (CPP), party spokesperson Randeep Singh Surjewala posted on Twitter Saturday. "We thank the 12.13 Cr voters for reposing faith in the Congress Party," Sonia said. Congress chief Rahul Gandhi leaves for the CPP meeting. The big question is whether Rahul will take over as the leader of the Congress in Lok Sabha. The first meeting of the newly-elected Lok Sabha MPs and members of the Upper House will be attended by CPP chairperson Sonia Gandhi, Rahul and other top leaders.

In 2009 and 2014, he won from Amberpet Assembly constituency, however, lost in December 2018. But the BJP nominated him from Secundrabad Lok Sabha constituency. He was the BJP Telangana president since 2009.

What are the challenges the Defence Minister could face?

The newly-appointed Defence Minister Rajnath Singh will be facing one of the biggest challenge of modernisation. The armed forces have been struggling with their vintage equipment. Some of its arms, artillery and air defence in particular cannot operate in today's environment. While the Navy needs major accretion to its fleets. READ MORE

Rahul Gandhi had recently indicated that he will continue on the post till such time a suitable replacement is found. He has been insistent on stepping down as the party chief. While sources close to Rahul said he has given a month’s time to find a replacement, party leaders said it could go beyond a month. Some senior leaders believe they have managed to secure some breathing time.

Rahul had avoided to meet the top party leaders who had reached his residence last week, instead fielded his sister Priyanka Gandhi Vadra to hold talks with them. READ MORE

The newly-elected Lok Sabha MPs of the Congress are scheduled to meet for the first time today and are likely to elect the leader of the Congress Parliamentary Party (CPP).

The CPP is currently chaired by Sonia Gandhi. The meeting will be held in the central hall of Parliament. READ MORE

A day after Rajnath Singh was appointed as the Defence Minister, he visited the National War Memorial Saturday. Singh will formally take charge today.

Morning! Welcome to our LIVE blog! For all the latest updates on the upcoming CPP meeting and more, follow this space. UPA chairperson Sonia Gandhi was re-elected leader of the Congress Parliamentary Party (CPP) on Saturday. The CPP, comprising newly-elected Lok Sabha MPs and members of the Rajya Sabha, held a meeting in the national capital a day after dates of the upcoming Parliament session were announced. Speaking on the occasion, Gandhi said, "We thank the 12.13 crore voters for reposing faith in the Congress Party." There was speculation as to whether Rahul Gandhi would take on the role, amid uncertainty of his stepping down from the position as Congress president.

Amit Shah and Rajnath Singh among others took charge of their ministries today. Earlier today, Rajnath Singh paid tribute to soldiers at the National War Memorial in New Delhi before taking charge as Defence Minister. Shah met Rajnath at his residence this morning. Newly-elected NDA leaders are likely to meet today, a day after the distribution of portfolios to the 57-member Council of Ministers. The new Council has 24 Cabinet ministers, 9 Ministers of State with independent charge and 24 Ministers of State.