A nine-time MLA and two-term Lok Sabha member, Mallikarjun Kharge had served as Congress' floor leader in the previous Lok Sabha, and also as Union Railway and Labour Minister in the UPA government. 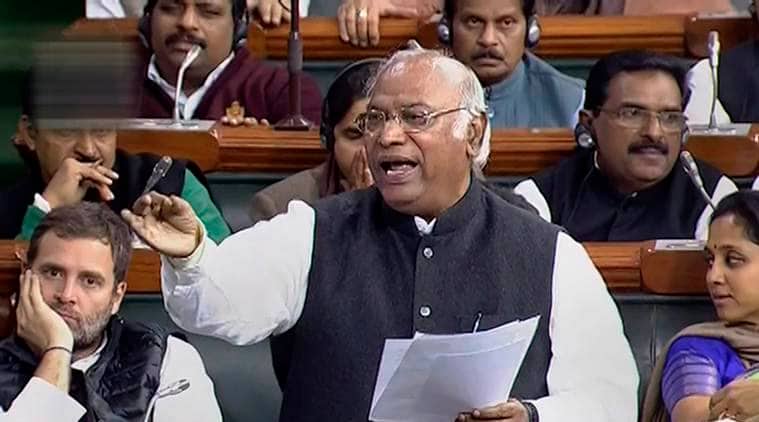 Mallikarjun Kharge (77), had also been a Minister in several Congress governments in the state in the past and had also served as KPCC President and Leader of the Opposition in the Karnataka Assembly. (Photo: LSTV Grab via PTI)

The Congress on Friday announced veteran party leader Mallikarjun Kharge as its candidate for the June 19 elections to the four Rajya Sabha seats from Karnataka. “Congress President Sonia Gandhi has approved the candidature of Shri Mallikarjun Kharge as Congress candidate for the ensuing biennial elections to the Rajya Sabha from Karnataka,” All India Congress Committee said in a release.

The four seats represented by Rajeev Gowda and B K Hariprasad of Congress, Prabhakar Kore of BJP and D Kupendra
Reddy of JD(S) will fall vacant on June 25 with their retirement. June 9 is the last date for filing nominations.
The Congress, with 68 MLAs in the assembly, can win one of the four seats easily on its own, so Kharge’s victory is said to be certain. Kharge, who was popularly known as “solillada Saradara”, a leader without defeat) faced his first electoral loss in his political life spanning several decades against BJP’s Umesh Jadhav in Gulbarga by a margin of 95,452 votes in the 2019 Lok Sabha polls.

A nine-time MLA and two-term Lok Sabha member, he had served as Congress’ floor leader in the previous Lok Sabha, and also as Union Railway and Labour Minister in the UPA government.

Kharge (77), had also been a Minister in several Congress governments in the state in the past and had also served as
KPCC President and Leader of the Opposition in the Karnataka Assembly.

His son Priyank Kharge is currently MLA representing Chittapur constituency and had served as a Minister during the
previous Congress and coalition governments. While ruling BJP with 117 members (including Speaker), can ensure victory in two seats, the JD(S), with just 34 seats in the assembly, is not in a position to win a seat in Rajya Sabha on its own, as a minimum of 44 votes are required for a candidate to win.

Speculations are rife that Congress is likely to support JD(S) with its surplus votes for the remaining one seat if the
regional party fields its supremo and former Prime Minister H D Deve Gowda, and in return may seek favour during the legislative council polls slated later this month.

No final decision has been taken in this regard yet, party sources said.

JD(S) is holding its legislative party meeting today to decide on the strategy for RS polls and decide on a candidate.
The BJP too, with several aspirants, is yet to finalise its candidate for the RS polls.