Since its formation on May 23, the coalition government has been on a rocky road, confronting wrangling over portfolio allocation and presentation of the budget. 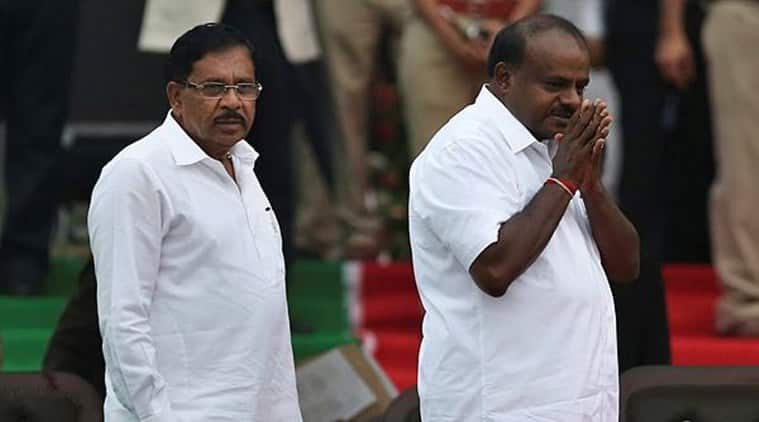 Seated next to Chief Minister H D Kumaraswamy (right), Parameshwara said, “We too have a responsibility and the coalition government was formed for the sake of Karnataka and not for our selfishness. (AP photo)

Karnataka Deputy Chief Minister G Parameshwara on Thursday said the Congress-JD(S) coalition government in the southern state will complete its five-year term at any “cost” and “compromise”.

“A new government has come. Many people may have anxiety as this is a coalition government — what will happen, how things will happen.

“I want to give one assurance that at any cost, at any compromise, we will complete five years. There should not be any doubt about it in Bengaluru or elsewhere,” he said.

The Congress leader was speaking at an event where the Infosys Foundation, the philanthropic arm of software major Infosys, signed a memorandum of understanding (MoU) with the Bangalore Metro Rail Corporation Limited (BMRCL) for the construction of a station at Konappana Agrahara in the Electronics City here.

Seated next to Chief Minister H D Kumaraswamy, Parameshwara said, “We too have a responsibility and the coalition government was formed for the sake of Karnataka and not for our selfishness.

“We want to give a good administration to Karnataka. We want Karnataka to grow further and become a role model in the country. That was our intention behind forming this coalition government.”

Noting that the chief minister had a long-term vision for the development of Karnataka and Bengaluru, Parameshwara, who is also in-charge for Bengaluru-related affairs, urged everyone to join hands towards fulfilling it.

Since its formation on May 23, the coalition government has been on a rocky road, confronting wrangling over portfolio allocation and presentation of the budget.

Senior leaders of both parties expressing doubts about the longevity of the government and a recent emotional outburst of Kumaraswamy that he was “not happy” and was swallowing the pain like “Vishakantha” (Lord Shiva) had pointed towards strains in the coalition.

On Municipal Administration Minister Ramesh Jarkiholi leading a group of legislators to Ajmer in Rajasthan, Parameshwara said according to the information he had, all of them had undertaken the visit together to fulfil a vow they had made ahead of the state Assembly polls.

There was no need “to read too much into it or project it as something else”, he said.

Asked why he skipped a meeting of MPs convened by the chief minister in New Delhi on Wednesday, the Congress leader said “My brother is unwell and that’s the reason I didn’t go. There is no need for it to be interpreted in a different way.”