Complaints against PDS dealers in Jharkhand, Bihar amid food crisis

In Jharkhand and Bihar, the food crisis triggered by the lockdown has put a spotlight on an old problem — leakages and corruption in the the Public Distribution System. 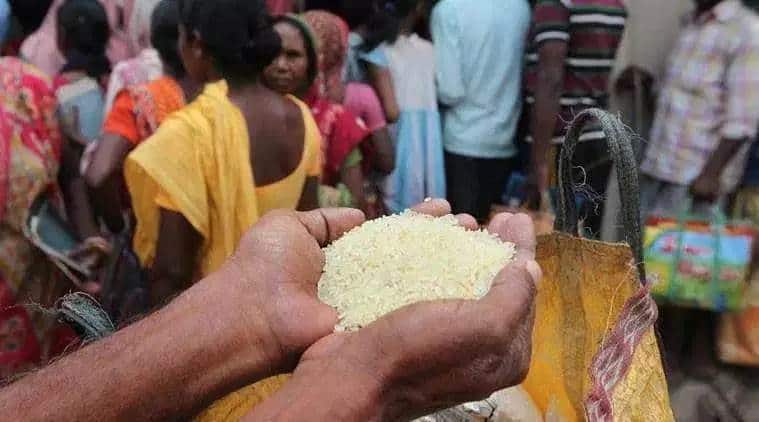 To help people tide over the lockdown, the Jharkhand government had announced double ration — 70 kg rice — for card holders and 10 kg of rice to 7 lakh people whose application for ration cards are pending.  (Express File)

Earlier this week, Jharkhand’s grievance helpline 181 received four calls from Palamu on a single day. All the callers had a similar complaint: though the state had promised 70 kg rice in April, their ration dealer in Medininagar wasn’t giving them the entire amount and had, in fact, confiscated the ration cards of 50 others. The details were forwarded to the district supply officer, who suspended the licence of the dealer and attached the customers to another dealer.

In Jharkhand and Bihar, the food crisis triggered by the lockdown has put a spotlight on an old problem — leakages and corruption in the Public Distribution System.

Almost a month into the lockdown that began on March 25, 865 PDS dealers find themselves in the dock in Jharkhand — 297 have had their licences suspended, nine have had their dealerships cancelled, 524 have been issued show-cause notices, and 44 face FIRs. The numbers are going up daily in the state which has 25,445 PDS dealers for 2.63 crore families.

To help people tide over the lockdown, the Jharkhand government had announced double ration — 70 kg rice — for card holders and 10 kg of rice to 7 lakh people whose application for ration cards are pending.

Bihar, where the government decided to give 5 kg rice and 1 kg pulses for three months as lockdown relief, too, has received several complaints of dealers shortchanging PDS beneficiaries.

Bihar Deputy Chief Minister Sushil Kumar Modi told The Indian Express that the state has so far suspended licences of about 200 dealers. “We have been receiving complaints from panchayats and have formed inspection teams. E-PoS machines have minimised corruption in PDS, but we are alert,” he said.

Santosh Rai of Sarra panchayat in Madhubani said, “All of us got 4 kg rice instead of 5 kg. The dealer collected our cards and made an entry of 5 kg in each card.” He said several people had complained against the dealer but no action was taken against him.

Additional Chief Secretary of Jharkhand Arun Singh said action was being taken against the dealers. “We cannot simply cancel the dealership at this point – that will lead to a bigger crisis. Wherever we get any complaint we are acting against the dealers,” he said.

Admitting to “problems”, Israil Ansari, who owns a PDS shop in Ranchi’s Kanke block, said dealers should be given a “fixed compensation”. “Every month, I get 100 quintals of ration. The Jharkhand government has asked me to charge Re 1 for a kg of rice, which means I get a commission of Rs 10,000 a month. But it is only on paper. I have to pay the transporters around Rs 1,000. I employ three labourers for distribution and I pay them Rs 5,000-6,000. I am left with less 3,000 for a month.”

In Bihar, dealers don’t get commission for distributing free ration. For the regular stock, a dealer gets a commission of 70 paise per kg of grain and Re 1 per litre kerosene of oil.

The Jharkhand Food Commission suggested to the government to emulate Chhattisgarh and Odisha where the ration is distributed by panchayats. In Odisha, around 75% of fair price shops are managed by Gram Panchayats and Panchayat Executive Officer.

Raj Kishore Mishra, former advisor to the Supreme Court-appointed commission for food security, said that PDS was in a bad shape in Odisha till 2008.

“Social Security and profiteering can not go hand in hand. After the intervention, there is larger transparency in Odisha. In most of the tribal/underdeveloped areas, 100 per cent fair price shops are managed by Panchayat. At the panchayats, a government employee, Panchayat Executive Officers, officially manage the distribution. They are more accountable than private dealers,” he said.

Development economist Jean Dreze said that although the dealership is not sustainable in itself,  the dealer’s engagement with the public is only for 10-12 days, the rest of the days can be utilised for other works. “However this cannot be justification for siphoning off the ration…Jharkhand needs to emulate Odisha, Chhattisgarh where the delivery is managed by the panchayats. This adds to transparency and effective implementation. Although in Jharkhand there are a few dealerships run by self-help groups, but most of them are private. This crisis has deepened the already existing problem.” However, he cautioned any knee-jerk reaction during the lockdown.

Jharkhand Food Minister Rameshwar Oraon said: “Once the lockdown is over, the government will study the best practices available in the country for PDS implementation to check corruption and we will deliberate on it”.