Will use stubble for biofuel: Environment Minister in Lok Sabha

Union Minister for Forests and Climate Change Bhupendra Yadav was speaking during a debate on climate change which also saw Opposition members questioning the government on setting a net-zero emissions target by 2070 at the Glasgow climate summit. 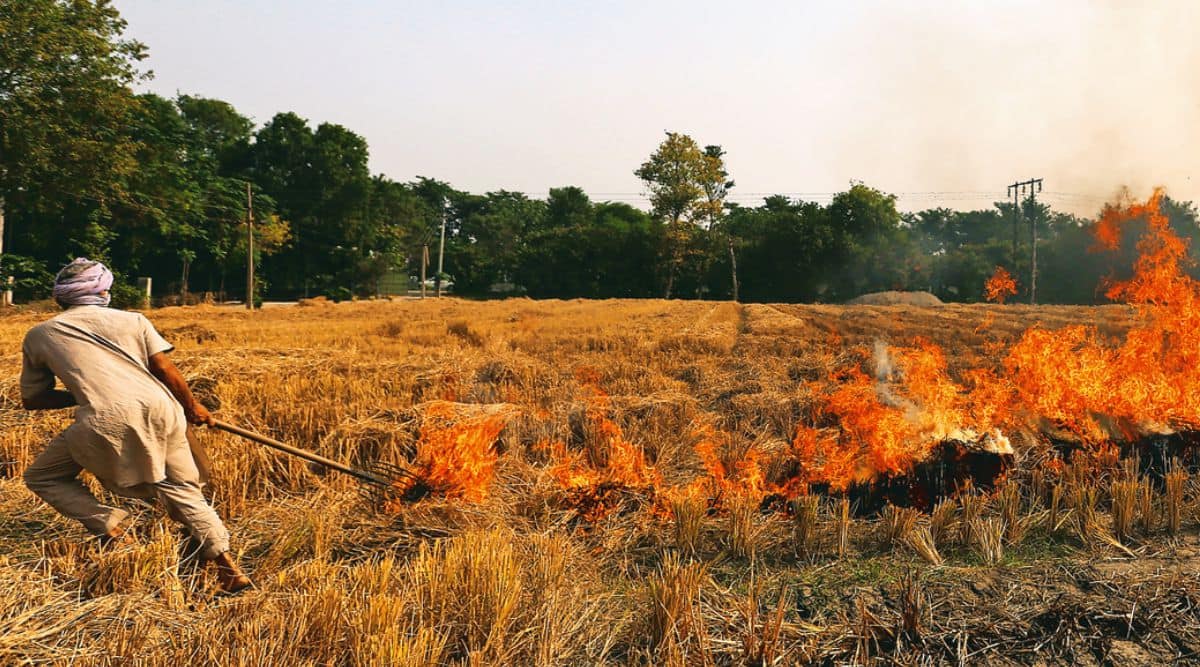 The government is working to convert stubble into biofuel in an attempt to reduce crop burning. (Express Photo: Gajendra Yadav)

The government is working to convert stubble into biofuel in an attempt to reduce crop burning, Union Minister for Forests and Climate Change Bhupendra Yadav Friday said in Lok Sabha.

He was speaking during a debate on climate change which also saw Opposition members questioning the government on setting a net-zero emissions target by 2070 at the Glasgow climate summit.

On Friday, Shiromani Akali Dal member Harsimrat Kaur Badal stated that Punjab farmers were being “defamed” over stubble burning. She asked the Union government to provide farmers with resources to deal with the issue.

Yadav, in his intervention, said the state-run NTPC Ltd had recently procured around 3,000 tonnes of stubble to be used for making biofuel and added that the government will review the results.

He said stubble burning has been decriminalised and listed measures to put to use stubble for different purposes so that farmers don’t burn them.

“It has allocated Rs 700 crore for machinery to get rid of stubble, and Uttar Pradesh used six lakh acres of land while Punjab and Haryana used one lakh acre each for using it as manure,” he said. Taking a dig at the AAP-led Delhi government, the minister said it used only 4,000 acres but put out big advertisements on using stubble as manure.

Meanwhile, Opposition members Friday alleged that Prime Minister Narendra Modi did a “volte-face” by setting a net-zero emissions target by 2070 at the climate summit in Glasgow and questioned the rationale behind it.

“Even a week before the COP 26, the government of India did not show any inclination to announce net zero target. Actually, the Environment Secretary had ruled it out in the media,” Trinamool member Saugata Roy said during a discussion on climate change in Lok Sabha.

The discussion on climate change in Lok Sabha was initiated by DMK member Kanimozhi on Wednesday.

“What prompted and under what pressure the prime minister did a volte-face in Glasgow and announced net zero target in 2070? Is there any credible research available to vindicate the 2070 net zero target? Was any discussion carried out on the net zero target,” Roy asked.

During the discussion N K Premachandran (RSP) accused developed nations of diluting their climate commitments over the past three decades since the 1992 Rio conference and that developed and developing countries should be treated separately on the basis of their capabilities.

Pointing out that ‘Common but differentiated responsibility’ has become an insignificant part of the Glasgow declaration,” – referring to the concept first accepted at the UN Conference on Environment and Development in 1992 at Rio de Janeiro – Premachandran said: “The responsibility of the developing countries and developed countries are to be treated as per the capabilities of the nation and also what the historical polluters have done in the past. All these things should be taken into consideration in deciding this principle.”

He alleged that India has failed in the negotiations to garner G-77 unity to prompt the industrial economies to agree to make a substantial reduction in carbon emission. He said the country has also failed to elicit binding commitments from the historic polluters to provide financial and technological support to the developing countries to tide over the problem created by the climate crisis. “The third suggestion is that India has to be better equipped for its negotiations,”the MP said.

“India must be in the forefront to meet the global demand for mitigation of climate change. At the same time, we should improve our capacity for adaptation,” he suggested.

Ramesh Bidhuri (BJP) lauded the prime minister’s initiatives to popularise use of energy efficient LED bulbs as an alternative to traditional lighting solutions and offer LPG subsidies which, he claimed, has reduced the dependence on firewood for cooking.

Bidhuri accused the Congress of “playing politics” with Mahatma Gandhi’s ideals of cleanliness and sustainable living and the “failure” to enact a law to ensure clean air in the country.

Jagdambika Pal (BJP) said, “We should not indulge in blame game…. All states irrespective of their political affiliation should work together on the issue of climate change and environment protection.”

National People’s Party (NPP) MP Agatha Sangma said development today has to be reconsidered and “we cannot follow the western model of development”.

“We have to work toward the well-being of the planet and the people at the same time,” Sangma said.

Congress’s K Suresh said it is unfortunate that developing nations like India are being blamed for the changes in climate when responsibility of degradation of environment was of the developed world and its relentless pursuit for profit and greed.