Citizenship Amendment Bill CAB 2019 Protests in Assam, Tripura, Guwahati, Northeast Today Highlights: While indefinite curfew was relaxed for several hours in Dibrugarh and Guwahati, the suspension of internet services in 10 districts was extended for 48 hours till December 16.

CAB protests Highlights: People wait to refuel their motorbikes at a petrol pump as the ongoing curfew was partially lifted in Guwahati Saturday. (AP)

Citizenship Amendment Bill (CAB) 2019 Protests Today Highlights: Assam continued to face restrictions for the fourth straight day in view of the law and situation following protests against the amended Citizenship Act. While indefinite curfew was relaxed for several hours in Dibrugarh and Guwahati, the suspension of internet services across the state was extended for 48 hours till December 16, news agency PTI reported.

Meanwhile, Union Home Minister Amit Shah Saturday accused Congress of stoking violence against the amended Bill. Addressing a rally in Jharkhand’s Giridih, Shah said, “We have brought the amended Citizenship Act and the Congress got a stomach ache and is fanning violence against it.” The BJP president also assured the people of the Northeast that their culture, language, social identity and political rights will be not be affected.

Tripura royal scion and chairperson of the Joint Movement Against Citizenship Amendment Bill (JMACAB) has filed a petition in the Supreme Court challenging the new citizenship law.

Speaking to indianexpress.com, Pradyot Kishore Debbarma Saturday said, “Tripura has suffered enough. We don’t want this state to go through this burden. I am a Hindu. We love our Hindus. Tripura is an example of giving shelter to the persecuted Hindu minority. But the time has come for the rest of the country to take the load and not Tripura.” Click here to read more.

Assam CM Sarbananda Sonowal also alleged that misinformation like more than one crore people will enter Assam under the Act are being spread to create confusion among the people.

"I appeal to all of you not to get convinced in this fake information. Those involved in inciting violence through the spread of misinformation do not want peace and development of the society. They are harmful elements. All peaceful people should unite against such anti-social elements," he said.

The state government has no problem with peaceful protests, Sonowal said adding that anti-social elements destroying public properties and threatening people will be punished.

Assam Chief Minister Sarbananda Sonowal Saturday said that "very negligible" number of people will be benefited by the amended Citizenship Act. He also said that the exact number of those people will be disclosed at an appropriate time and urged people to maintain peace.

"The number of people who will apply (for citizenship under the amended Act) will be very negligible. We are running the government and we have the data. At an appropriate time, you will be able to know all these clearly," Sonowal was quoted as saying by news agency PTI.

Will seek President's Rule if violence continues in WB : BJP

Accusing Bangladeshi Muslim infiltrators for being behind the ongoing mayhem and arson in several parts of West Bengal, BJP national secretary Rahul Sinha Saturday said the party will seek the imposition of President's Rule in the state if the situation continues.

Sinha blamed Chief Minister Mamata Banerjee for her "appeasement policies", which, he claimed, has led to the current situation in West Bengal. (PTI)

Joint CSIR-UGC NET exam for candidates from Assam and Meghalaya has been postponed in the wake of unrest in the region. 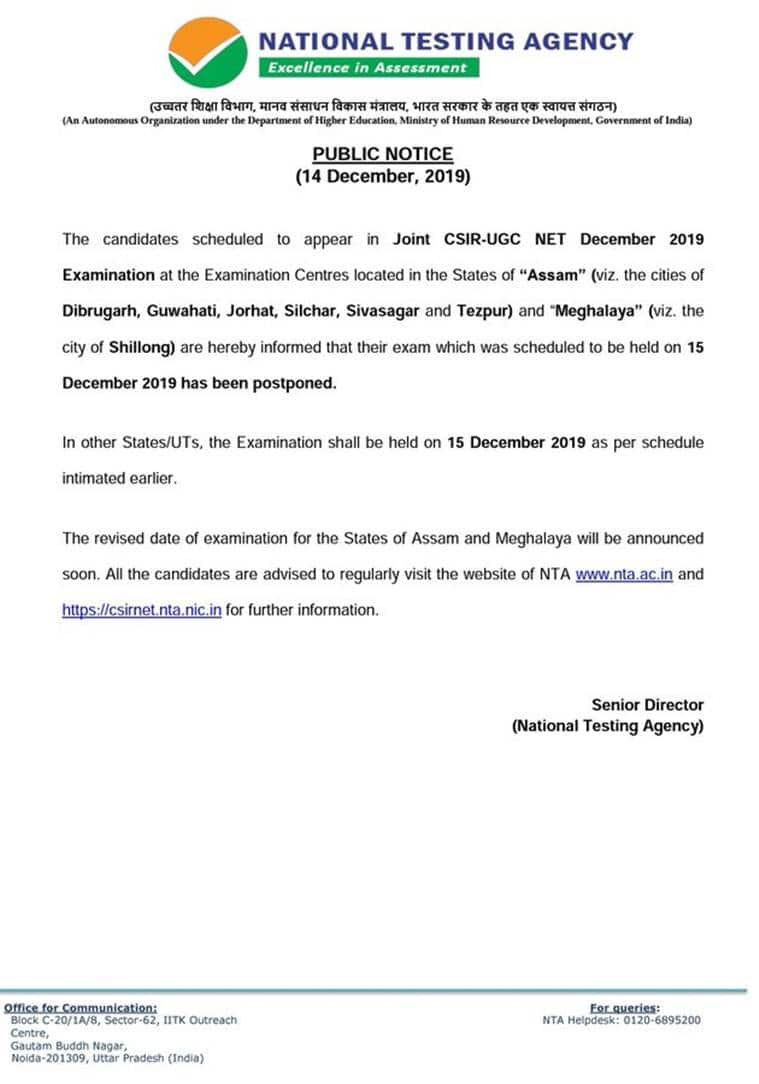 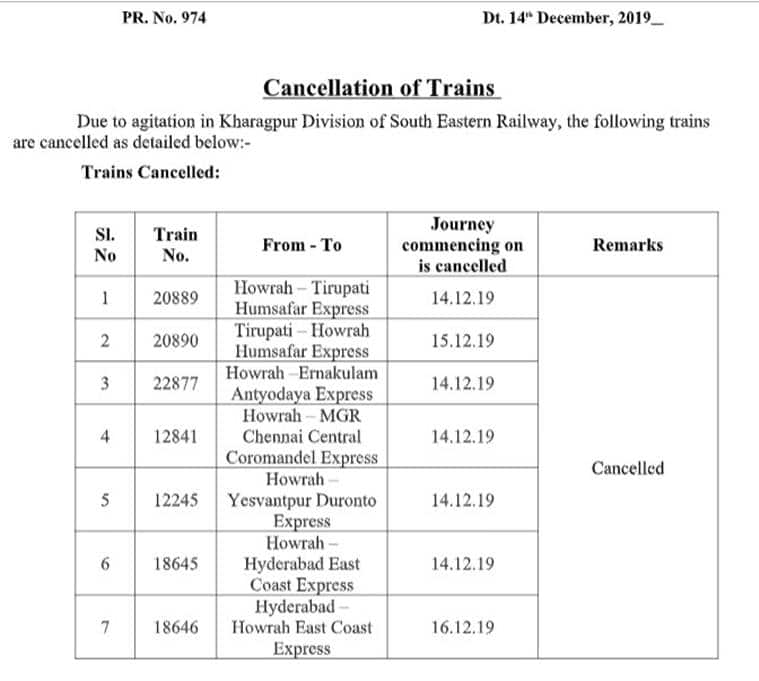 Rush in Guwahati petrol pumps between 6 am to 4 pm

Curfew was lifted from 6 am to 4 pm in Guwahati. The day saw a considerable rush at petrol pumps. The major petrol pumps at GS Road, Chandmari, Zoo Road, Beltola were open throughout the day.
“We came twice in the morning to fill petrol — but it was such a long queue, so we had to come back twice. Finally got it at 4pm,” said R Alom, a resident from Hatigaon.

Army warns people in NE about 'fake news' against the force

Amid protests in the Northeast over the amended Citizenship Act, the Army on Saturday advised people to not fall prey to "fake news" directed against the force.
The Army posted a collage of screenshots of social media accounts, accusing them of spreading misinformation against the force by accusing it of carrying out atrocities. (PTI)

Scores of people gathered at Jantar Mantar here on Saturday to protest against the Citizenship (Amendment) Act. People from all walks of life came out in solidarity with those opposing the new law. The Delhi Metro Rail Corporation has closed entry and exit gates at Janpath metro station in view of the protest. (PTI)

Major protests in Assam and some other parts of the northeast against the Citizenship (Amendment) Act have taken many in the BJP by surprise but they believe that the gains for the party will be more than any loss from implementing the contentious law. (PTI)

Angry protesters torched around 15 buses, both public and private, and blocked traffic on the arterial Kona Expressway in Howrah that connect both NH6 (Mumbai Road) and NH2 (Delhi Road) to Kolkata, the police said.

The National Highway 34, one of the main roads that connect north and south Bengal, was blocked in Murshidabad. Buses were also set on fire there, the police said.

The BCCI and Assam Cricket Association (ACA) will be "closely monitoring" the security situation in Guwahati in the wake of protests against the Citizenship (Amendment) Bill, keeping in mind the January 5 T20 International between India and Sri Lanka.

Sri Lanka are coming to India for a short three-match T20 International series, which starts at the Barsapara Stadium in Guwahati, but the prevailing security situation has cast a shadow of doubt.

"Right now, we cannot comment on whether the T20 International in Guwahati will happen or not. All the authorities (state Police, Home Ministry) will be monitoring the situation. We have to wait for some time. There is still three weeks to go so we have to be hopeful," Assam CA vice-president Parikshit Dutta told PTI. (PTI)

The ongoing violent protests against the amended Citizenship Act in several parts of West Bengal will only help the BJP, West Bengal minister Firhad Hakim said on Saturday.

Hakim, the urban development minister said that such violent protests will not help the state but will only strengthen the hands of the BJP. 'It is our duty as citizens of the country to protect the Indian Constitution and not to indulge in lawlessness,' he added. (PTI)

Road and rail blockades continued in different parts of West Bengal on Saturday by people protesting against the amended Citizenship Act, officials said. Incidents of violence were reported from Murshidabad and North 24 Paraganas districts, and rural Howrah, police said. (PTI)

It's time to rise to save democracy, Constitution: Sonia Gandhi

“Suffering injustice is the biggest crime, it’s time to rise to save democracy and Constitution,” she added. Accusing the BJP of violating the Constitution every day, Sonia said, “An atmosphere of “andher nagri chaupat raja” in the country, entire nation asking where is “sabka sath sabka vikas.”

CAB will destroy country as it has (destroyed) northeast: Sonia Gandhi at Bharat Bachao Rally

Addressing the Congress’ mega “Bharat Bachao Rally” (Save India Rally) at Ramlila grounds here, Congress president Sonia Gandhi assured justice to all who will be affected by the Citizenship Act implemented by the BJP government. “CAB, which the BJP government has brought in, will destroy the country as it has in the northeast. But I guarantee whoever will get injustice, Congress will stand with them,” she said.

Railways is running special trains from Guwahati to help stranded passengers in Assam, where protests are underway against the Citizenship Amendment Act, officials said on Saturday.

One such train was operated on Friday to Dimapur. Another was run to Furkating, the main railway junction in Assam's Golaghat district on Saturday and another to Dibrugarh. A special passenger train from Guwahati to Dimapur will run at 2:30 pm from Guwahati tonight, they said. (PTI)

"Do not take up law in your hand. Do not put up road blockades and rail blockades and create trouble for the common people on the roads," Mamata Banerjee said in a statement released from the West Bengal chief minister's office.
"Do not cause damage to government properties. Strict action would be taken against those who are found guilty in creating disturbances," the statement quoted her as saying. (PTI)

Naga Students' Federation has called for a 6-hour shutdown Saturday in Nagaland to protest against the newly-enacted citizenship law. Meanwhile, curfew has been relaxed today in Assam's Guwahati and Meghalaya's Shillong after improved conditions, PTI reported.

Violent protests broke out in the North-East states and spread to West Bengal, Delhi and parts of south India, Friday, with police resorting to lathicharge and tear gas shells to contain protesters. While two people were killed in Assam, at least 25 students were injured in protests outside Delhi's Jamia Millia Islamia University. The university has postponed the exams scheduled for today.

In its first remarks on the issue, the Trump administration urged India to “protect the rights of its religious minorities” in keeping with its “Constitution and democratic values”. The US and the UK have also issued travel advisories asking their citizens to "exercise caution" while visiting the North-East in the wake of the protests. The UN High Commissioner for Human Rights, meanwhile, said they are “concerned” that the law is “fundamentally discriminatory in nature” and appear to “undermine the commitment to equality”

The Citizenship law will grant citizenship to Hindus, Sikhs, Buddhists, Christians, Jains and Parsis who entered the country from Pakistan, Bangladesh and Afghanistan until December 31, 2014. It leaves out Muslims.

The Bill was passed in Lok Sabha on Tuesday and in Rajya Sabha on Wednesday. Late on Thursday, President Ram Nath Kovind gave his assent to the Bill even as violent protests erupted in Assam. Curfew has been imposed at several places in Assam, while the Army has carried out flag marches in many districts to control protests and violence.

The protests also spilt over to neighbouring Meghalaya after vehicles were vandalised and set ablaze in Police Bazaar and Iew Duh areas, resulting in the imposition of curfew in all neighbourhoods that include areas under Sadar PS and Lumdiengjri PS. Northeastern states fear the law will lead to legitimizing of immigrants from neighbouring Bangladesh and change the demographics of the region.

Amid the shutdown in North-East, Home Minister Amit Shah has cancelled his visit to Meghalaya and Arunachal Pradesh. Japan Prime Minister Shinzo Abe, who was scheduled to hold an annual bilateral summit meeting with PM Narendra Modi in Guwahati, has deferred his visit. Bangladesh also protested after the convoy of its envoy was attacked, and two signposts of the Bangladesh Assistant High Commission were vandalised. Bangladesh's Foreign Minister A K Abdul Momen and Home Minister Asaduzzaman Khan have also cancelled their visit to India

About a dozen petitioners, including Congress leader Jairam Ramesh and the All Assam Students’ Union (AASU), moved the Supreme Court questioning the constitutional validity of the Citizenship (Amendment) Act, 2019

Prime Minister Narendra Modi reached out to Assam, and assured people that their identity and culture would be protected. He also accused the Congress and its allies of spreading confusion over the Bill’s provisions and fanning the flames in the North-East. Taking to Twitter, Modi posted: “I want to assure my brothers and sisters of Assam that they have nothing to worry after the passing of #CAB. I want to assure them — no one can take away your rights, unique identity and beautiful culture. It will continue to flourish and grow.”