Demonstrators shout slogans and hold placards as they arrive at the venue of a protest against a new citizenship law. (Reuters)

“NPR=NRC. How much more will the Modi government lie and mislead the people? It was stated clearly on the record in the Rajya Sabha by this government that the National Population Register is the base document from where the NRC work will start,” CPI(M) general secretary Sitaram Yechury said.

In Bengal, leading the protest from Swami Vivekanada statue at Bidhan Sarani in north Kolkata, CM Mamata Banerjee Tuesday accused PM Narendra Modi and Union Home Minister Amit Shah of creating confusion over the impending National Register of Citizens (NRC). “The prime minister is saying there has been no discussion or proposal on NRC. But a few days ago, BJP president and Union Home Minister Amit Shah had said NRC exercise would be carried out across the country. Both the statements are contradictory. We wonder who is speaking the truth. They are trying to create confusion,” Mamata said in a rally.

Meanwhile, the Karnataka government has ordered a magisterial inquiry into the violent protests against the Citizenship Amendment Act in Mangaluru last week which resulted in two deaths. The state government, in an order passed on Monday, said it has appointed the Deputy Commissioner of Udupi district G Jagadish as the executive magistrate to inquire into the incident and submit a report within three months.

Congress leaders Rahul and Priyanka Gandhi, earlier today, were stopped from entering Meerut by the police. They were on their way to meet families of those killed in violence that broke out during protests against the Citizenship (Amendment) Act.

A committee to ensure a fair probe into the criminal culpability of those arrested in the recent anti-CAA protests in Lucknow has been formed, the police said.

"All investigators have been asked to ensure fair and evidence-based investigation," PTI quoted Naithani as saying.

The committee will minutely scrutinise the role of those arrested in the recent protests and demonstrations against the amended citizenship law in Lucknow. It will further decide whether an arrested person was a mere spectator and bystander or was part of the unlawful assembly or a miscreant, actively involved in rioting, arson and firing and damaging public property.

Protests against CAA in Karnataka's Hubli

Karnataka: Protesters organised a demonstration against #CitizenshipAmendmentAct, in Hubli earlier today. The protest was called by Anjuman-e-Islam. pic.twitter.com/NmmRjJKxsm

The student body organisation of the Aligarh University has urged President Ram Nath Kovind to visit the campus and meet the students who were injured on December 15 after a police crackdown on the students protesting against the new citizenship law, PTI reported.

In a 32-page report, the Aligarh Muslim University Students' Union (AMUSU) called the police crackdown as 'state-sponsored violence' and highlighted how several students were left seriously injured in the police action and demanded an inquiry into the incident apart from strict action against 'guilty' policemen and resignation of the university's Vice Chancellor.

The union also demanded the immediate revocation of false cases against the students and sought the 'immediate resignation of the Vice Chancellor, Prof Tariq Mansoor, the Registrar, Abdul Hamid and the entire Proctorial team'.

Nobody will lose citizenship because of NPR: Amit Shah

Clarifying further, Amit Shah in an exclusive ANI interview said, NRC is a different process and no person would lose their citizenship due to NPR.

'It is possible that some names are missed in the NPR, still their citizenship will not be revoked because this is not the process of NRC. The NRC is a different process. I want to make it clear that nobody will lose citizenship because of NPR,' Shah said. Follow Amit Shah interview updates

Hours after the Union Cabinet approved a proposal to conduct Census 2021 and updation of National Population Register (NPR), Union Home Minister Amit Shah Tuesday clarified there is no link between the NCR and NPR.

Kerala CM to hold meeting with political parties next week

Kerala CM Pinarayi Vijayan will convene a meeting of various political parties and socio-religious outfits on December 29 in the wake of protests against the new citizenship law.

In a letter sent to several parties and organisations, an official press release stated: "Determining citizenship on the basis of religion is contrary to fundamental rights and secular views proclaimed by the Constitution."

Hundreds of people gathered in Chennai's Salem to stage a protest against the new citizenship law demanding the withdrawal of it. Protests continued in parts of Tamil Nadu including Salem and Krishnagiri. No untoward incident was reported from anywhere, police said, PTI reported.

National Population Register will not be used as NRC: Prakash Javadekar

"Currently, there is no proposal to conduct nationwide NRC, on the basis of data collected through NPR," Javadekar said.

In Uttar Pradesh's Rampur violence on December 21, a close associate of Samajwadi Party leader Azam Khan is among the over 150 people identified by the police for vandalism during the violent protests against the amended Citizenship Act, PTI quoted the police as saying.

"More than 150 people have been identified so far for causing damages to public and private property. Parvez, a driver and close associate of former state minister Azam Khan, is also seen in pictures and video footages hurling stones at the police personnel," Rampur Superintendent of Police Ajay Pal Sharma told PTI.

The police have assessed the total damage to property to the tune of Rs 15 lakh so far which would be compensated by those involved in its destruction, PTI quoted a senior official as saying.

So far, 33 people have been arrested in Rampur in conncetion with the protest turned violent and claimed one life.

Addressing a rally in Kolkata, her fifth in the past one week, West Bengal Chief Minister Mamata Banerjee on Tuesday claimed Prime Minister Narendra Modi and Union Home Minister Amit Shah were making contradictory statements on NRC and wondered who was speaking the truth. "The prime minister is saying there has been no discussion or proposal on (nationwide implementation of) National Register of Citizens (NRC). But a few days ago, BJP president and Union Home Minister Amit Shah had said NRC exercise would be carried out across the country. Both the statements are contradictory. We wonder who is speaking the truth. They are trying to create confusion," the CM said.

On New Year's Day, members of the National Young India Co-ordination and Campaign and those supporting the movement plan to take a pledge to save the Constitution in Delhi. They have also coined a slogan: "New Year's Resolution -- Defend Constitution".

"We had over 50 organisations supporting us when we did the press release for the launch of National Young India Co-ordination and Campaign. Now the number is 70 and counting," said N Sai Balaji, member of the Young India National Coordination Committee (YINCC).

Addressing a press conference in Delhi, the student body demanded the withdrawal of the Citizenship (Amendment) Act before the upcoming 71st Republic Day.

"Our purpose is to develop the coordination between protesting students/organisations/unions on a national scale and enhance its scope and impact," the former Jawaharlal Nehru University students' union president said.

In an order passed on Monday, the Karnataka government ordered a magisterial inquiry into the violent protests against the Citizenship Amendment Act in Mangaluru last week, resulting in two deaths. The state government has appointed the Deputy Commissioner of Udupi district G Jagadish as the executive magistrate to inquire into the matter and submit a report within three months.

The government's order took note that protesters in large numbers defied Section 144 imposed in the state and the hurled stones at the police, burnt tyres on the road and tried to throw the burning tyre inside the police station.

The Tis Hazari court has issued notice to the Delhi Police on the bail plea of six of the 15 people sent in judicial custody in connection with the Darya ganj violence, PTI reported. The remaining nine people have also moved their bail application in the trial court.

Additional Sessions Judge Satish Kumar asked the police to file a reply by December 28. The matter will now be heard on December 26. Protesters on December 20 set a car on fire during their protest against CAA at Delhi Gate in New Delhi. EXPRESS PHOTO BY PRAVEEN KHANNA

BSP chief Mayawati said the Centre should allay concerns of the Muslim community over the new citizenship law and the impending nationwide NRC.

"...it will be better if the Centre allays all apprehensions of Muslims on CAA/NRC to their satisfaction," she said in a tweet in Hindi.

In another tweet, she said, "At the same time, the Muslim community should remain alert that they are not politically exploited on the pretext of (protest against) this issue."

Congress leaders Rahul and Priyanka Gandhi were stopped by the police on their way to visit the families of those killed in violence during the anti-CAA protests. "We asked the police if they have any order, they didn't show us any order but they told us to go back," the party has alleged.

Thousands turned up at the AASU protest in Dibrugarh’s Chowkidinghi playground against the Citizenship Amendment Act. Apart from Guwahati, Dibrugarh is one of the places in Upper Assam — the traditional bastion of Assamese nationalism — where the opposition to the CAA has been very strong. 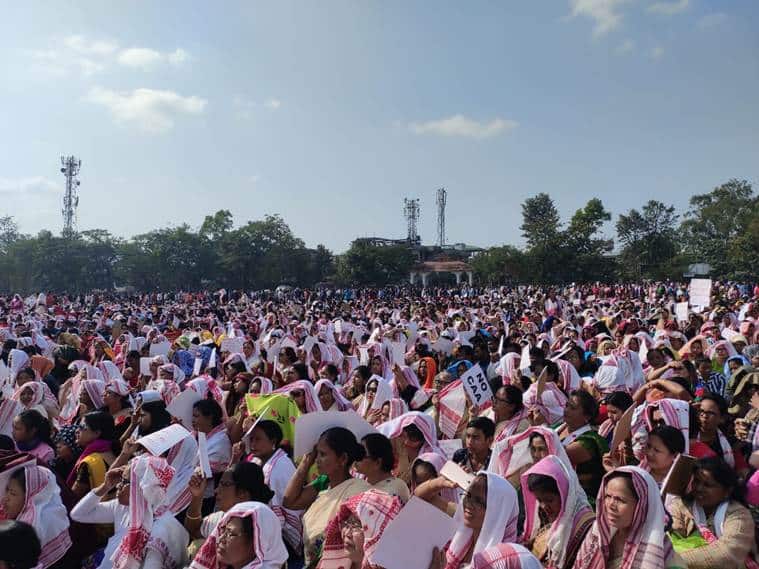 West Bengal chief minister Mamata Banerjee is leading a rally against the Citizenship Amendment Act and the NRC in Kolkata today.  She will lead the march from Swami Vivekanada statue at Bidhan Sarani in north Kolkata to Gandhi Bhawan in Beleghata.

Swaraj India leader Yogendra Yadav is leading the protest march from Mandi House to Jantar Mantar in Delhi, opposing the Citizenship Amendment Act that seeks to grant citizenship to non-Muslim minorities from Pakistan, Afghanistan and Bangladesh

Who is protesting against CAA-NRC? Here are answers from 4 states

What is making students, professionals, people of all ages, pour out into the streets against the new citizenship law, even with the risk of police crackdowns? Read here

On Monday, top leaders of the Congress, led by party chief Sonia Gandhi and former Prime Minister Manmohan Singh, read out the preamble and parts of the Constitution in different languages while vowing to protect the Constitution at the nearly five-hour satyagraha in New Delhi. AICC general secretary Priyanka Gandhi Vadra vowed in the names of those killed in the protests.

For over a week, the country has witnessed widespread protests against the Citizenship Amendment Act (CAA), especially in combination with the proposed all-India National Register of Citizens (NRC). Indians are debating what the combination means for various sections, and discussing why Muslims, in particular, are worried.