Citizenship Amendment Act (CAA) Protest Highlights: The Congress leader was on her way to meet the family members of former IPS officer S R Darapuri, who was arrested for protesting against the new citizenship law, in Lucknow.

Earlier in the day, accused the BJP of ‘communalising the institutions.’ (Express Photo by Vishal Srivastav)

Citizenship Amendment Act (CAA) Protest Highlights: Congress General Secretary for UP (East) Priyanka Gandhi Vadra on Saturday claimed that the UP police manhandled and stopped her while she was on her way to meet the family members of former IPS officer S R Darapuri, who was arrested for protesting against the new citizenship law, in Lucknow.

Earlier in the day, accused the BJP of ‘communalising the institutions.’ Accusing the other opposition parties in Uttar Pradesh of not doing much to oppose the citizenship law, Priyanka Gandhi said the Congress may have to go solo in the next Assembly polls in the state.

In his first rally since protests broke out in the state earlier this month over the Citizenship (Amendment) Act, Congress leader Rahul Gandhi Saturday said that his party would not allow the saffron party to destroy Assam’s history, culture and language. Earlier in the day, Rahul Gandhi dubbed the exercises of the National Population Register (NPR) and the National Register of Citizens (NRC) as “notebandi 2 (Demonetisation -2).”

UP Police denies Priyanka Gandhi's claims of manhandling her

The Uttar Pradesh Police on Saturday denied any claims doing rounds on social media made by Congress General Secretary for UP (East) Priyanka Gandhi that they manhandled her.Kalanidhi Naithini, Lucknow SSP told news agency ANI, "Today, morning area incharge, Dr Archana Singh has presented a report to Additional Superintendent where she has mentioned that Priyanka Gandhi Vadra's car was not moving in the scheduled route rather a different route." "Singh has also written that whatever rumours are doing rounds on social media of heckling and strangulating Priyanka Gandhi Vadra are wrong," he added.

Congress General Secretary for UP (East) Priyanka Gandhi Vadra on Saturday said that the UP police manhandled and stopped her while she was on her way to meet the family members of former IPS officer S R Darapuri.

If Rahul Gandhi has love for infiltrators, he can take them to Italy: Giriraj Singh

Union minister Giriraj Singh accused the Congress of wanting to "divide the country" by spreading lies and confusion over the Citizenship Amendment Act and said if Rahul Gandhi has "love for infiltrators", he can take them to Italy. Asking the Congress to refrain from a "policy of double-standards", Singh claimed that the UPA government had earlier talked about the citizenship law, but did not go ahead with it due to "appeasement politics". "Congress wants to divide the country by speaking lies... If Rahul Gandhi has a love for infiltrators (immigrants), let him take them to Italy," the Union Animal Husbandry, Dairy and Fisheries Minister said. (PTI) 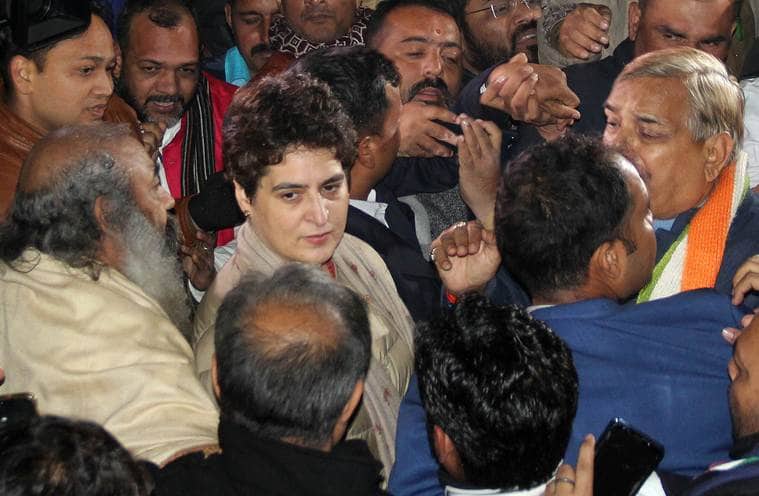 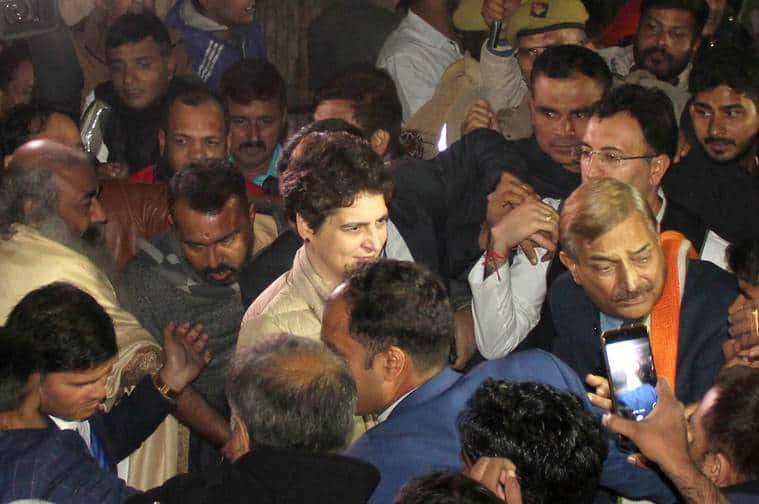 Unfortunate that Priyanka Gandhi was stopped by UP Police: All India Mahila Congress president

"Like any responsible opposition leader in the country, Priyanka Gandhi felt it was her duty to meet the family of the people affected by the UP Police in a manner worse than how criminals are treated. It is very unfortunate that while she was on her way to meet former officer Darapuri ji’s family, the 84-year old who was jailed while he was protesting along with the entire nation against CAA, she was stopped by UP Police. We condemn the physical violence on protesters and manhandling of Priyanka ji. This government should be dismissed and there should be President's rule in the state" All India Mahila Congress president Sushmita Dev said.

Priyanka Gandhi blamed the UP Police and said that they manhandled her and surrounded her when she was going with a party worker on a two-wheeler to meet the family of former IPS officer S R Darapuri.

After the police stopped her car from travelling, Smt. @PriyankaGandhi walked the distance to meet the family of former IPS officer, S R Darapuri. pic.twitter.com/ouzbJtkEq5

Priyanka Gandhi Vadra travelled on a two-wheeler in Lucknow

Priyanka Gandhi Vadra travelled on a two-wheeler after she was stopped by police while she was on her way to meet family members of Former IPS officer SR Darapuri.

Lucknow: Congress General Secretary for UP (East) Priyanka Gandhi Vadra travelled on a two-wheeler after she was stopped by police while she was on her way to meet family members of Former IPS officer SR Darapuri. https://t.co/MTFUCmj63X pic.twitter.com/NJbChyGL1K

Country fighting against idealogy that it fought against during freedom struggle: Priyanka Gandhi

Virtually equating the ruling BJP government with the British, Congress general secretary Priyanka Gandhi Vadra on Saturday said that at present the country was fighting an ideology which it had fought against during the freedom struggle. She was addressing party leaders during a programme held to mark the 135th Foundation Day of the Congress. "Today in the country, there are such powers in the government with whom we had a historical clash. We are at present fighting an ideology against which we fought during the freedom struggle," Priyanka Gandhi said here at the UP Congress headquarters. "Today the country is in trouble. If we do not raise our voice, we will be proved to be cowards," she added. (PTI)

Congress General Secretary for UP (East) Priyanka Gandhi stopped on her way while she was going to visit family of party leader Sadaf Jafar who was arrested during protest against Citizenship Amendment Act. "There's no point stopping us on road. It's not an issue of SPG but of UP police,"  she said.

Smt @priyankagandhi's car is forcefully stopped by UP police while on her way to meet the family of former IPS officer, S R Darapuri. pic.twitter.com/FC9nEdzJQ0

Assam might return to path of violence due to BJP’s policies, can’t allow that: Rahul

In his first rally since protests broke out in Assam over the Citizenship (Amendment) Act, Congress leader Rahul Gandhi Saturday said that the northeastern state might return to the path of violence because of the BJP government’s policies at the Centre and in the state. Addressing a rally in Guwahati, Rahul said, “I fear that because of BJP, Assam has taken to violence again,” he said referring to the new citizenship law. He also said that the Congress would not allow the BJP to attack the culture, language and identity of Assam and the northeast. Read more

Congress leader Rahul Gandhi visited the residence of Sam Stafford in Guwahati, who lost his life during Citizenship Amendment Act protest violence in the state.

BJP’s handling of the situation is all wrong: Rahul Gandhi

"The BJP’s handling of the situation is all wrong. If the public wants to convey what they feel peacefully, then there is no need to resort to violence and shoot them. The public can be heard with love," says Rahul Gandhi in Guwahati.

BJP doesn't want to listen to voice of people: Rahul Gandhi in Guwahati

"Wherever the BJP goes, it spreads hate. In Assam, youth is protesting, in other states protests happening as well. Why do you have to shoot and kill them? BJP doesn't want to listen to voice of people," says Rahul Gandhi in Guwahati

Will not allow BJP, RSS to control Assam: Rahul Gandhi in Guwahati

"We will not allow the BJP and the RSS to control Assam. The people of Assam will be responsible for the state's control. We will not let it happen," says Rahul Gandhi in Guwahati

Spirit of Assam Accord should not be broken: Rahul Gandhi in Guwahati

"I fear Assam is returning to the path of violence because of BJP's policies. The spirit of the Assam Accord should not be broken. The Accord had brought peace to the state," says Congress leader Rahul Gandhi in Guwahati

Opposition in UP not doing much against CAA, Congress may go solo in next Assembly polls: Priyanka Gandhi

Targetting the BJP for saying that there is no proposal for a nation-wide NRC as of now, Priyanka said the country is fed up of its lies. "Jo desh bhar mein NRC ki charcha phailate hain, aaj kehte hain ki charcha hi nahi thi. Ye desh aapko pehchan raha hai, aapki kayarta ko pehchan raha hai aur aapke jhoothon se uub chuka hai."Accusing the opposition parties in the state of not doing much to oppose the citizenship law, Priyanka Gandhi said the party might have to go solo in the Assembly elections. "Other opposition parties in the state are not speaking up a lot. But as I said, we're not going to be afraid & keep raising voices even if we've to walk alone. We've to be prepared to go into next Assembly elections alone," she said.

Congress leader Priyanka Gandhi Vadra targetted the Yogi Adityanath-led government for "communalising" the police force. Attaching a video clip in which the Meerut SP can be heard telling the protesters to "go to Pakistan', Gandhi on Twitter wrote, "The Constitution of India does not allow the use of this language with any citizen, and when you are an officer in an important position, then the responsibility increases. BJP has communally poisoned the institutions to such an extent that the officers today have no respect of the values enshrined in the Constitution."

Kapil Sibal writes on CAA: Legality is not enough

A political party which has a discriminatory, divisive agenda cannot occupy the high moral ground because it won an election by including a divisive agenda in its manifesto. A commitment cannot be clothed with legality merely because a majoritarian government got it passed in Parliament. Even if the law passes the test of legality, it may still be repressive, can instil fear and target communities. The most ill-conceived argument is that both the law and its makers are being unduly vilified. Read more

NPR and NRC two sides of a coin: Owaisi

The new law grants citizenship to Hindus, Sikhs, Buddhists, Christians, Jains and Parsis who entered the country from Pakistan, Bangladesh and Afghanistan until December 31, 2014. It has become controversial largely because it excludes Muslims.

Uttar Pradesh is the worst-affected state by the protests with violence erupting mainly in 12 districts, including Firozabad, Rampur, Meerut, Muzaffarnagar, Bulandshahr and Bahraich. Nineteen people have been killed so far and 1,246 people have been arrested in connection with 372 FIRs lodged so far. This is the biggest police crackdown in Uttar Pradesh since the 2013 Muzaffarnagar riots when 1,480 people were arrested in 567 cases.

To tighten the security, the Uttar Pradesh Police Friday used drones to snuff out any fresh protest. Security drones kept watch on groups of people moving on roads and senior officers led police patrols. In Lucknow, roads wore deserted looks with heavy police bandobast in areas of the old city which was rocked by violence on December 19. People were not allowed to assemble at any place for long after the Friday prayers.

Meerut too was limping back to normalcy after the violence last week left four persons dead. Police and administration officials exchanged “aman ke phool” (flowers of peace) with Muslim leaders and ate “aman ki khichdi” (khichdi of peace) as a mark of the improved relationship in the past week.

Amid the protests, the Delhi Police has used a facial recognition software to screen the crowd. The software that was used for during PM Modi's rally on Sunday to filter “law and order suspects” at the event. Sources said Delhi Police has so far created a photo dataset of over 1.5 lakh “history-sheeters” for routine crime investigation. Another dataset meant for monitoring sensitive public events has over 2000 images of terror suspects and — the latest addition — alleged “rabble-rousers and miscreants”. The use of AFRS by police assumes significance given ongoing protests across the city against the new citizenship law and the National Register of Citizens — events where police were seen videotaping proceedings.