Delhi Police denied it, but internal probe finds 2 of their personnel fired during Jamia protests

The December 15 protests had spiralled into violence after a section of protesters, including both Jamia Millia Islamia students and local residents, tried to march to Parliament but were stopped by police at Mathura Road. 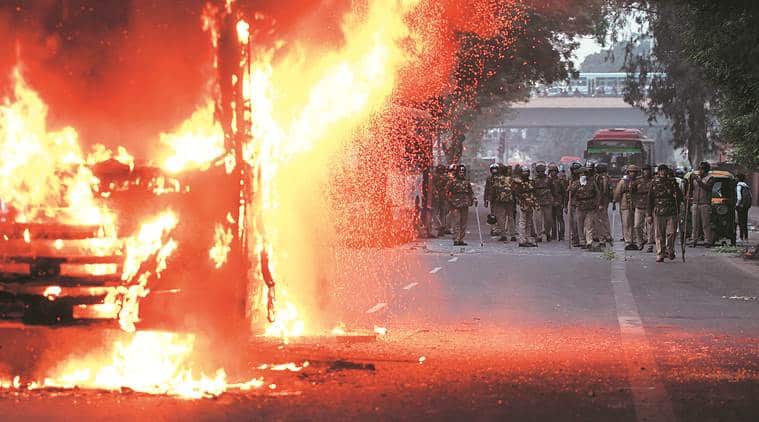 During anti-CAA protest in Delhi on Dec 15. Express file

THE INVESTIGATION into violence during protests against the Citizenship (Amendment) Act (CAA) at New Friends Colony on December 15 has revealed that three bullets were fired by two police personnel in front of an ACP-rank officer— contrary to Delhi Police claims that not a single bullet was fired by them during the clashes.

This finds a mention in a “case diary” prepared by officers of the Southeast district police, The Indian Express has learnt.

The December 15 protests had spiralled into violence after a section of protesters, including both Jamia Millia Islamia students and local residents, tried to march to Parliament but were stopped by police at Mathura Road. As a section of protesters started pelting stones and set buses and private vehicles on fire, police retaliated with lathi-charge and eventually stormed the campus.

Hours after the protest, two students of Jamia Millia Islamia, identified as Ajaz Ahmad (20) and Mohammed Shoaib (23), were admitted at Safdarjung Hospital, and a third, identified as Mohd Taimin (23), to Holy Family Hospital, with each alleging that he had received a bullet injury. Their claims were also recorded in the hospital’s MLC (medico-legal case) reports.

Police had, however, denied firing a single bullet. “The MLC report from Holy Family states that there’s an alleged history of a gunshot wound. This was written based on the statement of the injured. We have not fired bullets at any student. Any foreign body like metal or plastic could have caused injury. Two injured at Safdarjung too alleged gunshot injuries, but if anyone would have been shot at, the ambulance would take them to Holy Family or Fortis, which are the closest,” DCP (Southeast) Chinmoy Biswal had said at the time.

“The Southeast district police identified the personnel as well as the ACP, and it was confirmed that firing had, in fact, taken place,” a source said. The personnel are learnt to have said that they fired in “self-defence” when some protesters turned violent and they found themselves cornered.

Their statements were then recorded in the case diary.

The two FIRs filed in connection with the violence at Jamia Nagar and New Friends Colony make no mention of police firing.

“The specific case diary is yet to be handed over to the Crime Branch SIT, which took over the investigation on December 16. The SIT is probing 10 cases of rioting following Police Commissioner Amulya Patnaik’s directives,” an officer said.

When asked again on Saturday whether bullets were fired by police, DCP Biswal said he could not comment as the investigation was underway.

Meanwhile, all three Jamia students have been discharged from the hospitals, and the SIT is likely to approach them in the coming days to record their statements.

READ: Weeks after campus was stormed, Jamia is fighting back — with some street art

“Both patients have been discharged after being successfully treated at the hospital. Whatever foreign body was pulled out of their bodies has been sent to Delhi Police. Our role is to just provide basic treatment to the patient,” said Dr Sunil Gupta, medical superintendent, Safdarjung Hospital.

“We had handed over the foreign body for further testing to Delhi Police. They will investigate to find out whether it was a bullet or a teargas shell,” Father George PA, director of Holy Family Hospital, said.