Citizenship Amendment Act (CAA) Today Live News Updates: In Uttar Pradesh, at least six persons were killed in firing during protests, taking the overall death toll from the agittion over two days to nine. Police said that over 600 people were taken into custody as part of "preventive action".

Citizenship Amendment Act (CAA) Today Live News Updates: Hours after disappearing from Jama Masjid, Bhim Army chief Chandrashekhar Azad surrendered before Delhi Police and was taken into custody in the wee hours of Saturday. Azad was under the radar of the cops prior to the massive protests against the contentious Citizenship (Amendment) Act, that erupted at the mosque immediately after Friday prayers. The Bhim Army leader staged the agitation despite no permission.

At least 45 people, including 13 police officers, were injured as Walled City protests in the national capital that had largely remained peaceful, turned violent on Friday evening. A constable’s car parked outside Darya Ganj police station was set on fire, and as stone pelting started, police used lathi charge and a water cannon to disperse the crowd at Delhi Gate.

In Uttar Pradesh, at least six persons were killed in firing during protests, taking the overall death toll from the agitation over two days to nine. Police said that over 600 people were taken into custody as part of “preventive action”. Meanwhile, as protests against the citizenship law swelled nationwide and there was a pushback from state governments and even its allies, the ruling BJP was heard climbing down on the plan for a pan-India National Register for Citizens.

On choosing Jama Masjid as the site of protest, Chandrashekhar Azad said, "There is a mazar (mausoleum) of one of the greatest freedom fighters, Maulana Abul Kalam Azad, here. This is the place from where he challenged the British. There can be no better place to protest against an undemocratic government. A lot of people, especially women, are coming out and taking part in protests."

On the government's claims that the citizenship law will not apply to Indian citizens, the Bhim Army chief said, "I don’t believe the people who lie. All the slogans of Prime Minister Narendra Modi and Home Minister Amit Shah are lies. What happened during the notebandi (demonetisation)? Many people died. Who is responsible for their deaths? Today, six people have died in Uttar Pradesh? Who will take responsibility of their death? People do not trust them now. Why are they doing NRC? Muslims are patriots. They did not protest when the government abrogated Article 370. When the verdict in the Babri Masjid demolition case was pronounced, they did not protest. They did not protest when the Parliament passed the tripal talaq law. But now, we will protest the undemocratic move of this government."

Who will take responsibility for the current deaths: Chandrashekhar Azad

Bhim Army founder Chandrashekhar Azad, who had evaded the Delhi Police and joined protesters at Jama Masjid on Friday afternoon, says he will continue his protest till the government rolls back the new citizenship law. "Bhim Army stands for the protection of the Constitution which is bestowed by B R Ambedkar. We will not allow the division of the country," he told The Indian Express.

After evading protest for two days and giving police the slip from the steps of Jama Masjid on Friday afternoon, Bhim Army chief Chandrashekhar Azad was detained from the grand mosque around 3 am Saturday.

A police officer told The Indian Express, "He surrendered before the police at gate no.1 and is being taken to the Crime Branch's office have for further investigation."

Around 2.30 am, Azad, stepped out of the mosque and stood on the steps of the Jama Masjid surrounded by hundreds of protesters and addressed the gathering on a mic. He said, "...the fight to save the country cannot be fought from home."

#JUSTIN: @DelhiPolice has finally detained, Bhim Army chief Chandrashekhar Azad, after he surrendered before the police at gate no 1 of Jama Masjid. Earlier in the day, he managed to escape from their custody as there was a lot of resistence from the crowd.@IndianExpress

Bhim Army chief Chandrashekhar Azad has been taken in police custody. In a tweet earlier, Azad said that he is ready to surrender if all the people held are released.

The BJP in Assam began its outreach programme to protesters on Friday with a peace march in Nalbari, even as widespread protests and cultural demonstrations against the new citizenship law continued across the state. Chief Minister Sarbananda Sonowal, Finance Minister Himanta Biswa Sarma and state BJP president Ranjeet Dass marched silently through Nalbari town, along with several other top BJP ministers and a large gathering of supporters. To counter the BJP’s march, protest demonstrations against the new law were held in Nalbari under the banner of the All Assam Students’ Union (AASU). Read more... Hundreds gather in front of Delhi Police Headquarters in ITO

Hundreds have gathered in front of Delhi Police Headquarters in ITO in protest against the Citizenship Amendment Act that has triggered agitation across India. Daryaganj has earlier today witnessed violent protests where the protesters torched vehicles and pelted stones prompting the police to use water cannons. (Express Photo: Naman Shah) Traffic will be affected in Central Delhi on Sunday due to a rally at Ramlila Ground, PTI reported the police as saying on Friday.
In an advisory, police said parking for cars will be inside and behind the Civic Centre.  Bus would be allocated space to park on Mata Sundri Road, Power House Road, Velodrome Road, Rajghat parking, Shanti Van parking, service roads of Rajghat and the Samta Sthal, it said. Outside Broadcasting (OB) vans will be parked on the footpath of JLN Marg opposite to the Ramlila Ground beyond Gate Number 2 and up to Kamla Market, the advisory stated.

Protests at Delhi's Jama Masjid started after Friday's afternoon prayers. The agitation was led by Bhim Army chief Chandrashekhar Azad, who was first detained by the Delhi Police but managed to escape.

The Delhi Police has detained 40 people in connection with the violent protest in Daryaganj today. The protest turned violent in Old quarters of Delhi area after agitators torched a car, following which police used water cannons to disperse the crowd. According to the police, the protesters set ablaze a private car parked at Subhash Marg, Daryaganj. The fire was immediately doused with water and fire extinguishers. A total of 58 companies of security force personnel were brought in from outside to bolster the strength of local police.

Protest against new citizenship law at India Gate in Delhi

Raising slogans of 'Azaadi', 'No NRC, No CAA', the protesters, most of them college students, demanded that the new citizenship law be repealed. 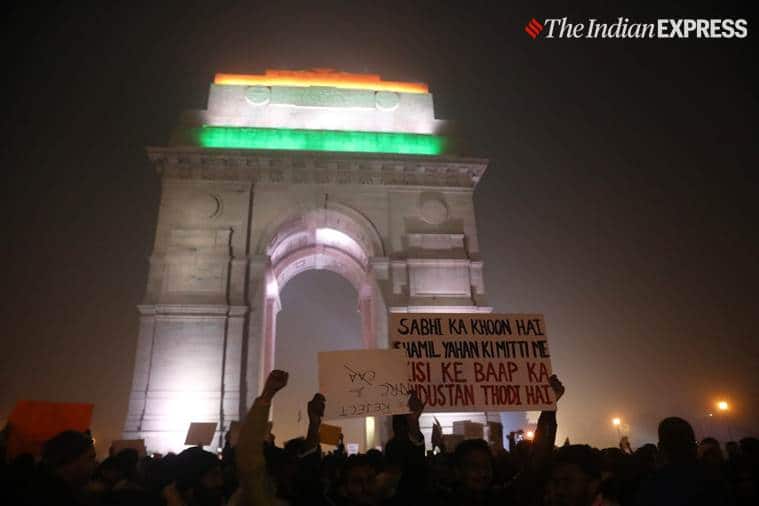 After giving the slip to the Delhi Police, earlier today, Bhim Army chief Chandrashekhar Azad has returned to Jama Masjid. Inside the premises of the mosque, Azad addressed the media and said the new citizenship law destroys the social fabric of the country. As the Delhi Police waits for Azad outside the premises of the mosque, Azad said: "This is a citizens' protest."

After the afternoon prayers at Jama Masjid, Azad led the protest inside the premises, holding a copy of the Constitution. Planned to march from Jama Masjid to Jantar Mantar, Azad was detained by the police in the mosque. However, he managed to escape the police's clutch, only to return in the evening.

Congress general secretary Priyanka Gandhi Vadra, present at the India Gate in Delhi, said the Citizenship Act and NRC are against the poor as they will be the most affected. 'What will the daily wage laboureres do,' Priyanka asked. At India Gate, Priyanka appealed that demonstrations across the country should be held peacefully.

"Government wants every Indian to stand in line to prove citizenship, as it did after note ban," Priyanka claimed. 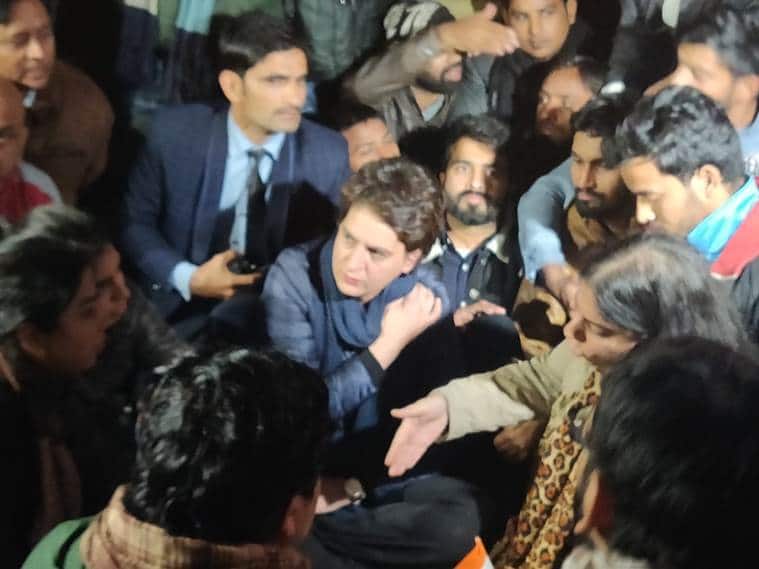 At least five persons have been killed in violent agitations across Uttar Pradesh, says the state administration. Of the five casualties, two hailed from Bijnore, while others were from Firozabad, Sambhal and Meerut.
Over 50 policemen have been seriously injured during the protests, PTI reported.

Indians need not prove ancestry by docs dating back to pre-1971: MHA

Amid the furor of the newly-amended Citizenship Act spread across the country, the Home Ministry Friday said no Indian citizen will be unduly harassed or put to inconvenience by asking to prove citizenship by showing documents like birth certificates of parents or grandparents dating back to a period before 1971. "Citizenship of India may be proved by giving any document relating to date of birth or place of birth or both. Such a list is likely to include a lot of common documents to ensure that no Indian citizen is unduly harassed or put to inconvenience," MHA wrote on Twitter.

Illiterate citizens, who may not have any documents, authorities may allow them to produce witnesses or local proofs supported by members of community. A well laid out procedure will be followed.#CAA2019

The Delhi Police said "outsiders" were involved in the violence near Delhi Gate during protest against the Citizenship Amendment Act.

"We used mild force and water cannon, didn't lathicharge protesters or lob tear-gas shells. Many of our personnel have been injured. Some people have been detained," PTI quoted Delhi Police PRO Mandeep Singh Randhawa as saying.

In Delhi on Thursday, senior Opposition leaders and hundreds of students and activists were detained by police as they marched from Red Fort in the old city area. Among those detained included Left leaders Sitaram Yechury, D Raja, Brinda Karat, Congress’s Ajay Maken and Sandeep Dikshit and activists like Yogendra Yadav. Students leaders like Umar Khalid too were among those detained near Mandi House in the heart of the capital.

In Bengaluru, historian and author Ramchandra Guha was detained, his stand-off with the police and detention captured on video that spread across social media as a powerful frame of civil society speaking up and calling out the new law.

A large number of protesters gathered at the Jantar Mantar as well. While protests remained largely peaceful in Delhi, where there were violent demonstrations and police action in Jamia Millia Islamia just a few days ago, clashes broke out in Lucknow and there were reports of arson.

Protesters pelted stones at the police and set on fire a police post. A passenger bus was set on fire in the Sambhal area.

West Bengal Chief Minister Mamata Banerjee dared the Government to conduct a UN-monitored referendum on the Citizenship Act and the proposed nationwide NRC. “Just because BJP has got the majority doesn’t mean they can do whatever they want. If the BJP has guts, it should go for a United Nations-monitored referendum on the issue of Citizenship Amendment Act and the NRC…If the BJP loses this mass vote, then it should step down from the government,” she said.