Choron ke sardar hit, so they are upset: PM Modi on demonetisation

PM Modi said those “looting the nation” will not succeed because he wears the “raksha kavach” (protection shield) of “125 crore countrymen”. 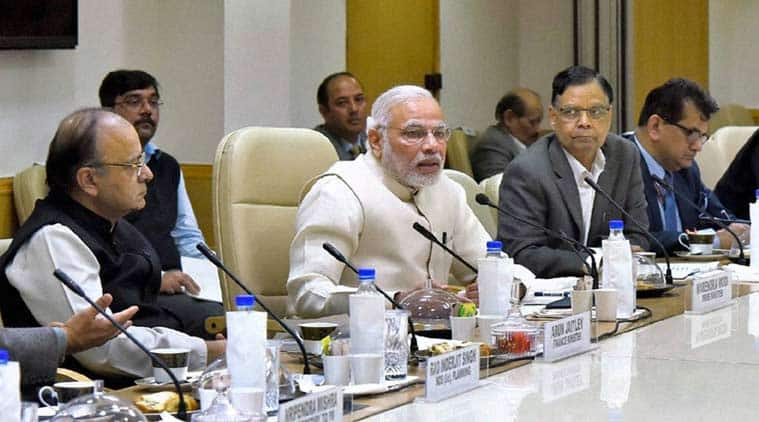 Prime Minister Narendra Modi interacting with the economists and other experts, on the theme “Economic Policy – The Road Ahead”, organised by the NITI Aayog in New Delhi on Tuesday. (Source: PIB)

Hitting back at the Opposition for its criticism of his government’s demonetisation decision, Prime Minister Narendra Modi Tuesday said people had made him their “chowkidar” (watchman) and he had upset “choron ke sardaron” (leaders of thieves) by striking at them first. He said those “looting the nation” will not succeed because he wears the “raksha kavach” (protection shield) of “125 crore countrymen”.

Defending the decision to ban notes of Rs 1,000 and Rs 500, Modi told a Dehradun rally of the BJP in poll-bound Uttarakhand that the demonetisation drive was intended to bring back “money looted from the poor”.

Without naming Rahul Gandhi but rejecting the Congress vice-president’s charge that he was helping big corporates and the rich, the Prime Minister said: “My fight is against those stashing cash at home. There are people who had filled cupboards with currency notes. They used to keep wads of cash beneath the beds on which they slept. Does this money not belong to the poor?… By banning the old currency notes… I forced open the cupboards of many influential people (hazaar paanch sau ka note band karke achche achchon ka cupboard khol diya hai).”

He said the 2014 mandate was not for just “cutting ribbons and lighting lamps” at ceremonies. “Aapne mujhe chowkidar ka kaam diya hai. Ab mein chowkidari kar raha hoon toh kuchch log pareshaan hain. Unko takleef ho rahi hai. Unko lag raha hai ki aisa kaisa chowkidar aa gaya. Choron ke sardaron par hi pehla vaar kar raha hai (you have given me the job of a watchman and when I am doing my job, many people are upset. They are troubled that such a watchman has come whose first strike is against the leaders of thieves).”

Taking a dig at the Congress government of Harish Rawat in Uttarakhand over alleged corruption in the 2013 flood relief supplies, the Prime Minister said that he had so far heard of only men involved in embezzlement but in this state, even scooters were corrupt.

Sanitation in capital has seen no improvement: LoP in SDMC