After 19 months, work at Nainital's Sukhatal Lake came to a halt last week when the Uttarakhand High Court — acting on a PIL against the government's beautification plan that allegedly involved laying a layer of concrete on the lake bed — asked for all construction activities at the lake to be suspended till further orders. 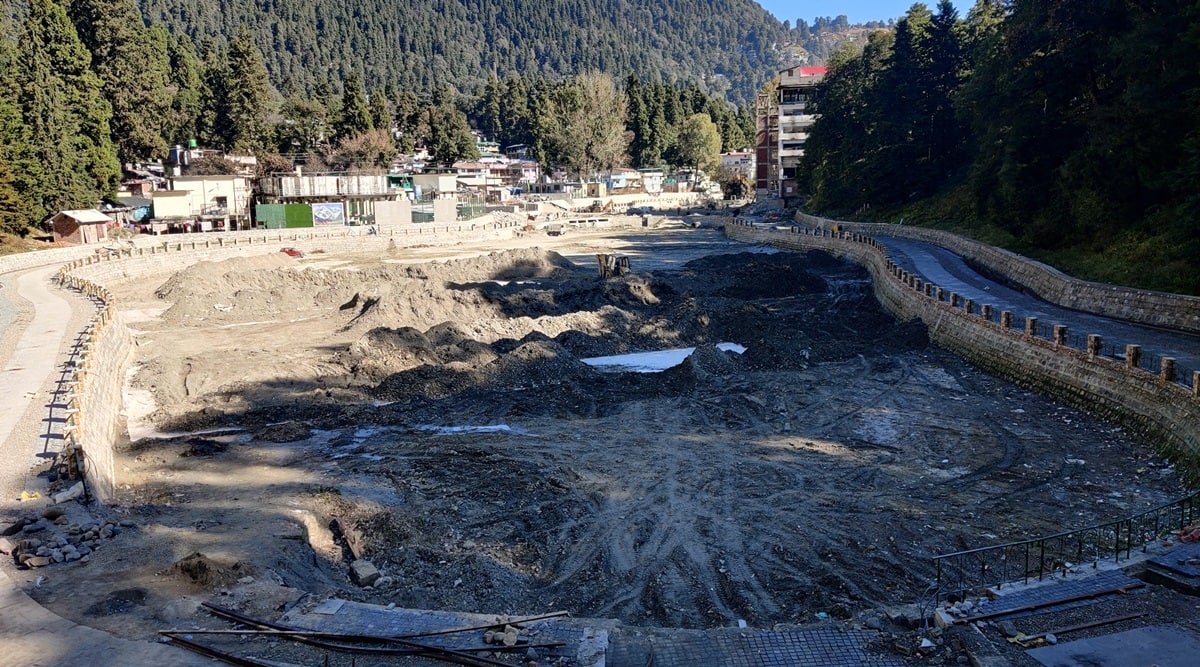 The Sukhatal Lake in Nainital. (Express photo by Avaneesh Mishra)

A signboard announcing the ‘Sukhatal Lake Recharge Zone Tourist Destination’, and a couple of JCB machines and concrete mixers are all that are left at the work site. By Friday, November 25, most of the workers had left, except for some who were putting away the raw materials — sacks of cement and rolls of electric wiring.

After 19 months, work at Nainital’s Sukhatal Lake came to a halt last week when the Uttarakhand High Court — acting on a PIL against the government’s beautification plan that allegedly involved laying a layer of concrete on the lake bed — asked for all construction activities at the lake to be suspended till further orders.

The Sukhatal catchment area, spread across 23,000 square metres, serves as the main recharge zone for the renowned Naini Lake, a km away. The lake gets its name because it is “sukha (dry)” for most part of the year since most of its water gets drained into the Naini, sustaining the larger lake even during the lean summer months.

In May last year, the government, based on a project report prepared by IIT Roorkee, began work on the Rs 25.51-crore beautification plan that involves, among other things, a fence with iron railings around the lake area and a paved walkway. But it’s the plan to make the lake impregnable, by allegedly lining the lake bed with concrete so that the lake retains water through the year, that raised the hackles of environmentalists.

Officials working at the site said around 80 per cent of the work was completed when the court order came in on November 22.

“We were working at good speed and the plan was to finish everything in the next two months and open the site to the public. Work on the floor of the lake bed was about to begin when the court order came. Almost all of the workers have left since then,” said Naveen Agarwal, an engineer at the site.

The High Court’s order followed a letter written by 104 signatories — local activists and citizen groups — to Uttarakhand HC Chief Justice Vipin Sanghi alleging an “ongoing destruction happening on Sukhatal Lake in the name of development”. In March this year, the court took suo motu cognisance of the matter, converted the letter into a PIL and appointed Advocate Kartikey Hari Gupta as amicus curiae.

In the letter, the group expressed concern about the “unscientific and unwanted” development of Sukhatal Lake and said its proposed development plan, which includes concretisation, has the potential to damage the ecology of Naini Lake and endanger the livelihood of Nainital residents.

The government, however, has denied that its plan involved concretising the lake bed, and said that it only planned to use a geosynthetic clay liner — factory-manufactured hydraulic barriers that do not make a surface completely impermeable but increase water retention.

Secretary of the District Level Development Authority, Pankaj Kumar Upadhyay, said that though the initial plan was to build a concrete bed in one portion of the lake to retain water, after meetings with civil society, it was decided that there should be no concrete bed. “Following the meeting, we again reached out to IIT-Roorkee and they suggested another option, which was to use a geosynthetic clay liner instead of a concrete bed. We started the work on the clay liner, but some people sent a letter to the court,” he said.

During the hearing, amicus curiae Gupta pointed out that the use of impermeable material on the Sukhatal lake bed is prohibited by all scientific bodies.

“IIT Roorkee has mentioned that it made the feasibility reports after deliberations with the sponsoring agency. We argued before the court that IIT Roorkee has never applied independent mind, as it has made the report for the agency which funded the said project,” Gupta told the court.

Talking to The Indian Express, Nainital-based Charu Chandra Pant, who retired as professor of geology from Kumaon University, said the area is ecologically sensitive and warned against tampering with it. “The lake is on a higher ground and thus works as a recharge zone for the Naini lake. In the last three-four decades, because this lake was seasonal, people had started using it as a dumping ground. Some built their houses around and encroached on the catchment area. Also, around three-four pumps installed here pump out around 3 million liters of water a day, which is a big portion of Nainital’s 8-million-litre per day demand. Had the lake ended up with a cemented floor, there would be no water in the lake. Even if there is enough water, there will be a bloom of algae as it will be stagnant water,” he said.

Dr Vishal Singh, Executive Director of the Centre for Ecology Development and Research (CEDAR), said any beautification plan has to be carried out carefully since Nainital has a very fragile geology. In 2014, a research team led by Dr Vishal Singh had identified Sukhatal as a ‘critical recharge zone’ for Nainital.

“If we look at it in terms of a social and ecological perspective, intervention only if very necessary should be done keeping in mind the very important hydro-geological, functions and social values of Sukhatal which include maintaining the water balance of Nainital lake and providing drinking water to a large population of the city. Tampering to the lake bed should be avoided at all costs,” he said.