INX Media case HIGHLIGHTS: Chidambaram to be in CBI’s custody till Aug 30

P Chidambaram INX Media Case Today HIGHLIGHTS: Chidambaram, whose CBI custody is ending today, will be produced before a trial court where the agency can further seek his custody.

Chidambaram being taken by the CBI after Delhi court remanded him for an additional four days till August 30. (Express Photo by Tashi Tobgyal)

Chidambaram INX Media Case HIGHLIGHTS: In a major setback to former Union minister P Chidambaram, the Supreme Court on Monday refused to entertain a plea, challenging the dismissal of his anticipatory bail in a corruption case lodged by the CBI in the INX Media case. The apex court said his petition has become infructuous as Chidambaram has already been arrested by the investigating agency.

Prior to this, the Congress leader had moved the top court, saying his plea challenging the trial court’s order remanding him to CBI custody in the case has not been listed for hearing today despite the apex court’s direction on August 23. The Supreme Court said the plea will be listed for hearing after the registry gets necessary orders from Chief Justice of India Ranjan Gogoi.

Earlier in the day, the Supreme Court extended till Tuesday the protection from arrest given to Chidambaram in the INX Media money laundering case lodged by the Enforcement Directorate.

Meanwhile, a Delhi special court remanded Chidambaram in CBI custody for an additional four days till August 30 in the INX Media case. “We need five days of custody of Chidambaram as the confrontation with co-accused will continue to unearth larger conspiracy,” PTI quoted Solicitor General Tushar Mehta, appearing for the CBI, as informing the court.

The Supreme Court today will hear three pleas filed by P Chidambaram in connection with the INX Media case. Get latest updates here

Chidambaram to remain in CBI custody till Aug 30

The Delhi special court has remanded Chidambaram for four more days to CBI custody till August 30.  The Congress leader was produced before Special CBI Judge Ajay Kumar Kuhar after the expiry of his four days remand, granted on August 22.

The Delhi court has reserved the order on CBI's plea for extension of Chidambaram's custodial interrogation by five days. The order is likely to be pronounced in the next half hour.

Defending Chidambaram, senior advocate Kapil Sibal said ED's contention before the top court bear no relevance to the current case before this court. Sibal pointed out that the CBI had mentioned about a payment to the tune of $5 Million, however, no such question was put forth Chidambaram during his interrogation in the past 26 hours.

He also said the amount was mentioned to sensationalise the case and claimed that the CBI has no details of the $5 million involved in this case.

Sibal tells the court that the CBI had asked Chidambaram whether any amount was paid to him by co-accused Peter Mukerjea. "I (PC) have categorically said no" to that question., Sibal said.

Seeking extension of Chidambaram's custodial interrogation by five days, counsel appearing for the CBI, SG Tushar Mehta, says Chidambaram has to be confronted with some emails as well. He further said the ED has filed a few documents before the Supreme Court in relation to Chidambaram's involvement in the case.

Commencing the arguments in the INX Media case, the ED says that during the interrogation, Chidambaram has to be confronted with co-accused in the case to unearth the larger conspiracy. The special judge sought details from CBI regarding Chidambaram's interrogation it conducted the last four days. The judge is perusing the CBI case diary.

Special Judge Ajay Kumar Kuhar is hearing the case. Solicitor General Tushar Mehta and Additional Solicitor General K N Natrajan are arguing for CBI and said the confrontation with co-accused is not complete, the prosecutors said and placed before the court a file containing email exchanges between the accused persons.

"We need five days of custody of Chidambaram as the confrontation with co-accused will continue to unearth larger conspiracy," PTI quoted Mehta as saying.

The CBI seeks an extension of Chidambaram's custodial interrogation by five days in the case. Arguments in the case have commenced in the packed courtroom.

Last week a Delhi special court had remanded Chidambaram in CBI custody till August 26, observing that the allegations against him in the INX Media case are “serious in nature” for which a “detailed and in-depth investigation is required”.

The Delhi police are paving way for Chidambaram to reach inside the courtroom. Chidambaram, who has reached the court, has been greeted by his supporters and is speaking to his counsel Dayan Krishnan.

Former Union finance minister Chidambaram reaches the CBI court. Today is Chidambaram's last day in CBI custody. He was produced after the Supreme Court refused to entertain his plea challenging the Delhi High Court order which had dismissed his anticipatory bail plea in the corruption case lodged by the CBI which has arisen out of the INX Media scam. 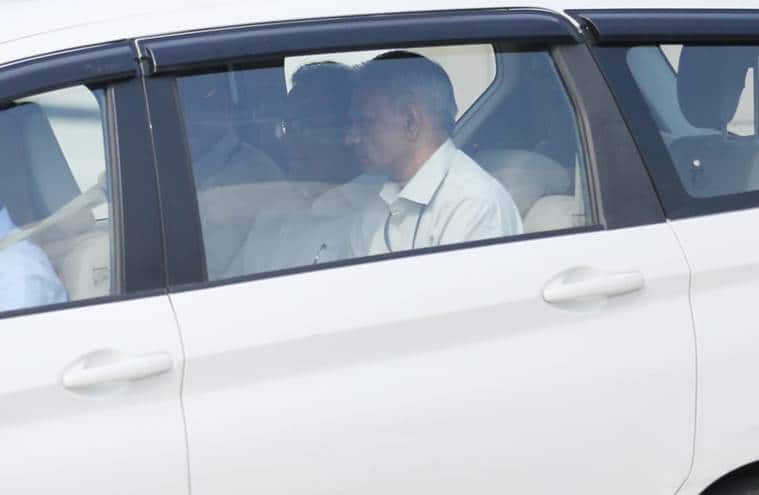 The Supreme Court has extended Chidambaram's interim protection from arrest in the ED case till tomorrow. The hearing for today has been concluded.

Former Union Minister P Chidambaram has been produced before Delhi Court on expiry of his four days CBI remand in INX Media case.

Special CBI Judge Ajay Kumar Kuhar on August 22 had remanded Chidambaram to CBI custody till today and had directed the agency to produce him after his medical examination.

Sibal further questioned the manner in which the investigative agencies are conducting the proceedings.

On ED’s charge that Chidambaram was trying to tamper with evidence, Sibal says the agency never raised this charge anywhere anytime before. "They are claiming that there is apprehension of tampering of evidence. Tampering of what? Properties situated outside? Or bank accounts? If that tampering is possible, my arms must be really long," he says.

Counsel for Chidambaram Sibal questions in how any court can conclude that this requires his client's custodial interrogation and challenges the lawyer for the ED to show a link between at least one bank account and property detail with Chidamabaram. "Let them give at least one bank account and one property details and the link between that and P Chidambaram," Sibal says.

Money laundering case in SC: Counsel for Chidambaram objects on Mehta not sending docs to him

Mehta tells the top court the case diary is the basis for the judgment and "that is exactly what I want to produce before the court today". The counsel for Chidambaram, Sibal raises an objection and says Mehta could produce any document before the court, however, it should be sent to him first. "These are the procedural issues that need to be addressed in a case that involves personal liberty," Sibal says.

Meanwhile in Supreme Court, senior advocate Kapil Sibal and SG Tushar Mehta spar over a note which, Sibal claims the ED gave to the Delhi High Court and parts of which were reproduced in the high court's order. Refuting Sibal's claim, Mehta says the ED never gave such a note to the high court.

Chidambaram's counsel senior advocate Abhishek Singhvi and Dayan Krishnan have reached Delhi's Rouse Avenues Court. Security has been tightened in and around the court.

P Chidambaram an accused only because he is Karti's father: Sibal

"Chidambaram is being made vicariously liable. The ED's case seems to be that since he's Karti's father, he must be involved... There is no chargesheet filed naming him so prima facie, no offence has been committed," Sibal was quoted as saying by Bar & Bench.

All, except Chidambaram, on bail: Sibal to SC

"Chartered Accountant Bhaskar Raman got bail, Karti Chidambaram got bail, Indrani and Peter Mukherjea are on default bail and no sanctions have been sought for the six government secretaries till now," Kapil Sibal said.

Karti Chidambaram neither a director nor shareholder: Kapil Sibal

"The case is that Karti Chidambaram used his relationship with P Chidambaram to influence public servants to secure ex-post facto FIPB approvals for the downstream investment in INX media. All the then six FIPB secretaries have been examined and none of them said that Karti Chidambaram approached them. The statements of these officers are also part of the attachment proceedings where they have said that Karti never approached them. Their case talks about Advantage Strategies but Karti is neither a Director of the company nor a shareholder," Sibal was quoted as saying by Bar & Bench.

Security beefed up outside Rouse Avenue court ahead of Chidambaram's arrival

Security tightened in an around Delhi's Rouse Avenue court ahead of Chidambaram's arrival. The former Union minister's four-day CBI custody ends today. Those who are not related to the Congress leader case is not allowed to enter the court premises.

Court assembles to resume hearing in the case. Senior counsel Kapil Sibal continues with his arguments.

The CBI had registered an FIR on May 15, 2017, alleging irregularities in the Foreign Investment Promotion Board clearances granted to the INX Media group for receiving overseas funds of Rs 305 crore in 2007 during Chidambaram's tenure as finance minister. Thereafter, the ED lodged a money-laundering case in 2017.

Chidambaram was arrested on August 21 night from his Jor Bagh residence by the CBI in the alleged corruption case and was produced before a trial court on August 22, which remanded him to four-day CBI custody till August 26.