Chidambaram being taken out of the courtroom by CBI officials. The court has sent him to CBI custody till August 26 (Express Photo by Tashi Tobgyal)

Chidambaram arrested Highlights: A Delhi Special Court remanded former Union Minister P Chidambaram to CBI custody till August 26 in connection with its probe into charges of corruption in the INX Media case. Chidambaram was arrested late Wednesday night for his alleged role in the case. The special judge said that Chidambaram will be allowed to meet his family everyday and shall also be medically examined from time to time.

Earlier today, Chidambaram was produced before Special Judge Ajay Kumar Kuhar where his advocates opposed the CBI plea on the ground that all the other accused, including his son Karti, have already been granted bail in the case. Opposing the plea, Kapil Sibal argued the “the custody of a person cannot be merely to carry out searches at the accused premises,” adding that the grant of bail is a rule and the issue before the court is of “personal liberty”.

Appearing for the CBI, Solicitor General Tushar Mehta said “there is a reasonable ground for Chidambaram’s custody as he was evasive in his replies and chose to remain silent during the interrogation by the agency.” “This is a serious case, involving intelligent people like him (Chidambaram),” he said adding that if the custody is not given, the prosecuting agency will fail in its duty to reach at the root of the conspiracy.

Chidambaram makes submissions after his request allowed by court

A request that former Union minister P Chidambaram, arrested in the INX media case, be allowed to make a brief submission was granted by a Delhi court, despite strong objection from the CBI.

Soon after arguments on custodial interrogation got over, senior advocate Abhishek Manu Singhvi, who was appearing for Chidambaram, sought permission from special judge Ajay Kumar Kuhar that his client be allowed to speak as he wants to throw some light on the questions being asked by the CBI during interrogation.

Clad in a white 'mundu' paired with a full-sleeve white shirt, Chidambaram told the court that on June 6, 2018, when he was called by the agency for questioning for the first time and he had answered all the questions put before him.

"On June 6, 2018, please ask for the transcript.. there is no question which has not been answered. The allegation of USD 5 million whatever was never put before me. Only question. They only asked if I had a foreign (bank) account, I said no. I was then asked if my son had (foreign bank account) to which I said yes 'My son has with the RBI's permission'," he told the court. Soon after his submission was over, the court reserved its order and the judge left the court room.

There is evidence against Chidambaram, says Kishan Reddy

Senior Congress leader P Chidambaram was arrested as he was not cooperating with the investigating agencies, Union Minister of State for Home G Kishan Reddy said on Thursday. "There is evidence..," he told PTI.

Reddy said it was the court which will try the case, not the government and law will take its own course. "He was arrested as he was not cooperating with the investigating agencies. He should have cooperated. There is proof and evidence against (him) as to who took
money from whom and through which bank... total records are there..," he said.

Heaping praise on senior advocates Kapil Sibal and Abhishek Manu Singhvi, who defended Congress leader P Chidambaram in court today, his son Karti said, "It is a privilege to hear Kapil Sibal and Abhishek Manu Singhvi in court. Master class. They should video record all court proceedings. Will be most useful to all students of law, particularly those interested in court craft."

It’s a privilege to hear @KapilSibal and @DrAMSinghvi in court. Master class. They should video record all court proceedings. Will be most useful to all students of law, particularly those interested in court craft.

CBI expands probe against Chidambaram; FDI clearances to other companies also under scanner

The CBI has expanded the probe against former finance minister P Chidambaram, bringing under its ambit foreign investment clearances given to companies other than INX media during his tenure, officials said Thursday.

The CBI suspects that Chidamabaram and his son Karti also received kickbacks from other companies to facilitate foreign investment clearances through the FIPB route which necessitates the former minister's custodial interrogation, they said. Both Chidambaram and Karti have strongly denied allegations of corruption levelled by the CBI.

The agency in its FIR related to INX media case has alleged that Karti Chidambaram helped the company by using his influence in the ministry to get clearance for FDI investment worth Rs 305 crore and for it companies linked to him received payments under the garb of consultancy services. The FIR has not mentioned whether Chidambaram himself received any payments for granting FDI clearances. (PTI)

Case of documentary evidence, money, if paid, need to be ascertained: Court

Sending Chidambaram to CBI custody till August 26, a special court Thursday said that "trail of money, if so paid, is to be ascertained."

"It is a case based on documentary evidence and those documents need to be traced."

Sending former union minister P Chidambaram to CBI custody till August 26 in the INX Media case, a special Delhi court observed "investigation needs to be brought to a logical end for which custodial interrogation is sometimes found useful and fruitful."

Sending Chidambaram to CBI custody till August 26, a special court Thursday said allegations against the former minister are serious in nature and in-depth investigation is required.

"Allegations of payment to Chidambaram in 2007-08 and 2008-09 are specific and categorical," the court observed.

Chhattisgarh CM Bhupesh Baghel on P Chidambaram's arrest: "P Chidamabaram was constantly criticising the policies of the central government and was pointing out their failures. The government is not able to face the criticism and so they want to suppress the opposing voices." (ANI)

INX Media case: Chidambaram taken out of the courtroom by CBI

Former union minister P Chidambaram is being taken out of the courtroom by the CBI after the court granted a five-day remand of the Congress leader in connection with the INX Media case. 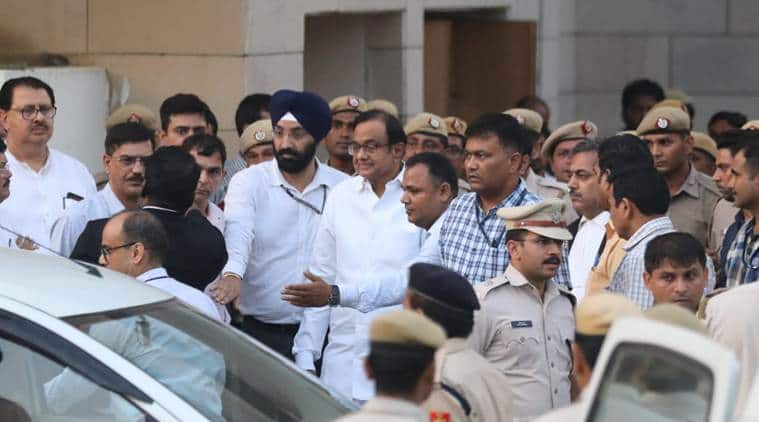 CBI gets five-day custody of Chidambaram in INX Media case

A Delhi Special Court remanded former Union Minister P Chidambaram to CBI custody till August 26 in connection with its probe into alleged charges of corruption in the INX Media case. The special judge said that Chidambaram will be allowed to meet his family everyday and shall also be medically examined from time to time.

INX Media case: How arguments unfolded between CBI and Chidambaram in court

Chidambaram was produced before Special Judge Ajay Kumar Kuhar. Chidambaram’s advocates, Kapil Sibal and Abhishek Manu Singhvi, opposed the CBI plea on the ground that all the other accused, including his son Karti, have already been granted bail in the case.

Here’s how arguments unfolded between the two sides

The NCP on Thursday slammed the "political vendetta" behind the CBI and ED's actions against senior Congress leader P Chidambaram and MNS chief Raj Thackeray, respectively.

NCP chief spokesperson Nawab Malik alleged it was the Modi government's "model" of "misusing" probe agencies to harass opposition leaders who speak up against it and added people will see through the developments.

Hitting out at the BJP government over Enforcement Directorate's (ED) summons to Thackeray, NCP leader Dhananjay Munde said that an "undeclared Emergency" has become more apparent in the country now.

On the CBI's claims of Chidambaram being evasive in the investigation pertaining to the INX Media case, the former union minister said in court: "Please look at the questions and answers, there are no questions which I have not answered, please read the transcript. They asked if I have a bank account abroad, I said no, they asked if my son has an account abroad I said yes."

Sibal had argued in court that of the 12 questions put to the accused (Chidambaram), six were asked long back in June 2018.

Arguing for a five-day remand of former union minister P Chidambaram in the INX Media case, the CBI argued that Karti, Chidambaram's son, also underwent custodial interrogation in the case. "We are not extorting confession but we have the right to reach to the root of the case," Solicitor General Tushar Mehta said. (PTI)

Special Court has concluded hearing arguments on the remand application of former union minister P Chidambaram by the CBI. The court will pass an order in half and hour.

Solicitor General Tushar Mehta arguing for the CBI in the INX media case says "Chidambaram has tremendous potential of not cooperating in probe since he is highly intelligent." The CBI has sought for a five-day remand of the former union minister.

Countering Chidambaram's argument, Mehta said everybody is equal before court. He also opposed the plea that Chidambaram be allowed to argue to himself, saying able lawyers are already representing him.  (PTI)

No allegation of tampering of evidence made by CBI: Singhvi argues for Chidambaram

Senior advocate Abhishek Manu Singhvi joins Kapil Sibal to oppose the CBI case against Chidambaram. He says the entire case is based on a statement on Indrani Mukerjea who has now turned an approver. This cannot be the ground to seek custodial interrogation, he argues.

He further says: "The whole case is that "I (Chidambaram) am evasive". He is evading means, I am not answering the way you (CBI) want me to answer."

In a dramatic turn of events Wednesday night, CBI personnel scaled the boundary walls of the New Delhi residence of senior Congress leader and former Union Minister P Chidambaram and arrested him, in full media glare, in connection with its probe into alleged charges of corruption in the INX Media case.

A team of the Enforcement Directorate, probing alleged money laundering charges, also showed up at Chidambaram’s Jor Bagh residence who was taken away in a CBI vehicle at 9.45 pm. Congress leaders and lawyers Kapil Sibal and Abhishek Manu Singhvi were with Chidambaram when he was placed under arrest. The former minister, also a member of the Congress Working Committee, was taken into custody soon after he addressed a press conference at the AICC headquarters on Akbar Road where he claimed innocence.

Flanked by the top leadership of the Congress, he said neither he nor any member of his family had been made an accused in the INX Media case. He said no chargesheet had been filed in the case and the FIR by the CBI did not impute “any wrongdoing” by him. He said he will respect the law even if it is applied with an “unequal hand” by the investigating agencies.

The CBI had registered an FIR on May 15, 2017, alleging irregularities in the Foreign Investment Promotion Board clearance granted to the INX media group for receiving overseas funds of Rs 305 crore in 2007 during Chidambaram's tenure as finance minister. Thereafter, the Enforcement Directorate lodged a money laundering case in this regard in 2018. Meanwhile, the Supreme Court has listed Chidambaram's petition on Friday without giving him any interim relief in the matter.