Called the Sanchar Kranti Yojana, at an outlay of Rs 1,467.90 crore, the scheme is ostensibly aimed at increasing mobile penetration in a state, which is the lowest in the country at 29 per cent against the national average of 68 per cent. WITH ONLY months to go before the state elections, Chhattisgarh Chief Minister Raman Singh on Thursday launched what the ruling BJP believes will be a “gamechanger” — an ambitious scheme that will see distribution of 50 lakh smartphones to rural households, urban poor and college students across the state.

Called the Sanchar Kranti Yojana, at an outlay of Rs 1,467.90 crore, the scheme is ostensibly aimed at increasing mobile penetration in a state, which is the lowest in the country at 29 per cent against the national average of 68 per cent.

The programme, however, has attracted fierce criticism from the opposition, which has called it a political sop. The Chhattisgarh Janata Congress has even written to the Election Commission, asking it to halt distribution of the smartphones.

On Thursday, President Ram Nath Kovind launched the scheme, distributing three mobile phones to two women from Jagdalpur and one male student from Lohandiguda in Bastar.

READ | No place for violence in our culture, constitution: Ram Nath Kovind

Government officials told The Indian Express that the principle behind the scheme was to increase mobile penetration in the state, and encourage digital modes of governance. 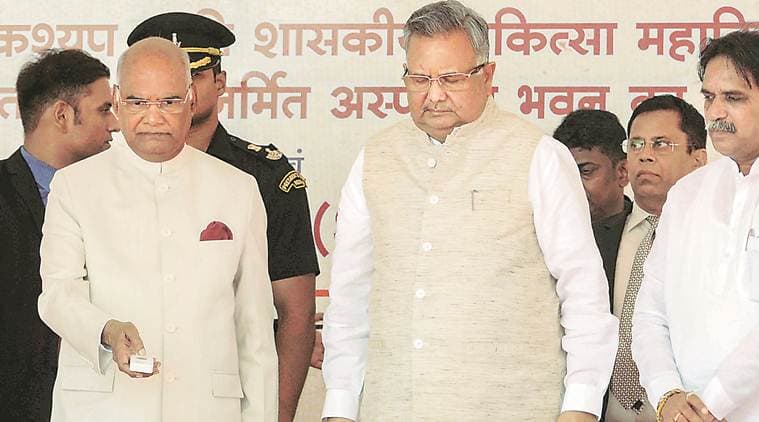 President Ram Nath Kovind with Chhattisgarh Chief Minister Raman Singh at the inauguration of a college campus in Jagdalpur on Thursday. PTI

Alex Paul Menon, CEO, Chhattisgarh Infotech Promotion Society, the government body looking at the implementation of the scheme, said requests for proposal were issued thrice, looking for a “consortium” that would look at both the mobile phone as well as network requirements. “The two bids that we received in the third round was from two competing consortiums. One was Reliance Jio and Micromax, and the second was Airtel and Lava,” Menon said. Reliance-Micromax bid was found to be lower.

Senior government officials said the phones will also come pre-loaded with an app called “Goth”, the Chhattisgarhiya word for conversation. The app, developed by the Directorate of Public Relations, will give users information on central and government schemes, as well as entertainment programmes in local languages.

Officials said the app has only “one-way information flow”. “This is an app which will inform people of local schemes, farmers of programmes that could benefit them. In the long run, different government departments will create apps where people can check status of their ration, and so on,” a senior official said.

The scheme, however, has triggered political heat, with the Chhattisgarh Janata Congress already approaching the Election Commission, asking for the distribution to be brought to a halt.

T S Singhdeo, Leader of Opposition in the Assembly and senior Congress leader, said there were various aspects that must be looked at. “First of all, it is disappointing that the President chose to be involved in what is clearly a political sop. We have to examine all aspects. For instance, we have been told that only a Jio sim will work, and that curtails choice… Also, dissemination of information of government schemes is fine, but this cannot extend to the political. For instance, the Government of India emblem or the state government emblem is fine, but if the app has photographs of leaders, that is political propaganda,” he said.