‘Kuch dalal aaye the… later, I found that mantriji bought the land’ 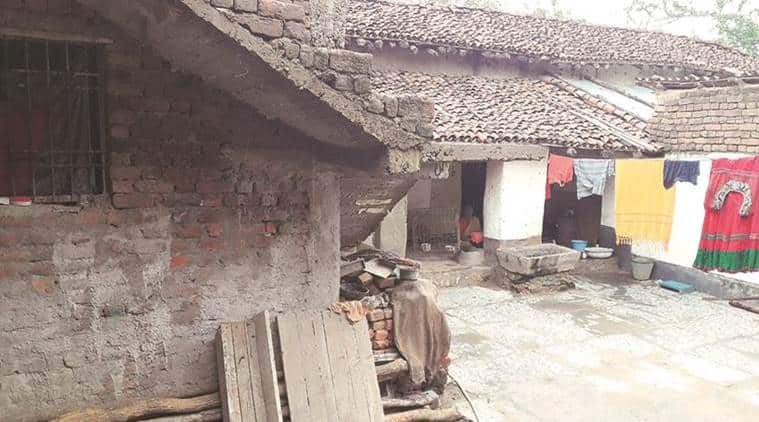 Home of Vishnu Sahu who donated his land to govt and then sold it.

Like the walls of the home he lives in, 64-year-old Vishnu Ram Sahu is crumbling. On a cot in his bedraggled house, he sits without a shirt, a pain in his knees, and ailments in his kidneys. He has fallen on bad times, he says. And he traces the beginning of the decline to 23 years ago, when he gave up 4.12 hectares as “daan” to the then Madhya Pradesh Water Resources (WRD) department, that has now become the centrepiece in allegations of impropriety and conflict of interest of a powerful Chhattisgarh minister and his family.

In 1994, Sahu says, WRD officers visited him asking for his land. “They told me that a government project would come up on the land. And they promised that the department that would acquire the land would give me and my family members jobs in lieu of the land taken. I was adamant about sending my children to school and all of them wanted service jobs, and not be stuck in the village farming. So I agreed. They gave us no promise of the jobs in writing and I signed the papers for the daan of my land. Unki baaton mein aa gaya,” Sahu said.

For years, Sahu said he waited, but no project came up, and no jobs were given. “They went back on their promise, and nothing happened. I kept paying all the lagaan on the land for years. Why should I not consider it mine?,” he said. Despite government records showing that Rs 22.90 lakh was spent on afforestation and the building of cattle protection trenches after the land was transferred by Water to the Forest Department, Sahu says not one sapling was sown. “Last year, some forest officials came and a panchayat was held asking if trees had been planted. In front of everyone, I said nothing had happened,” Sahu said.

Then in 2009, even as Sahu considered the land his own, there was another knock on his door. By this time, problems had begun to mount. The eldest of three brothers, with four children each, there were marriages to conduct, and illnesses to take care of. He says he needed the money. “Kuch dalal (middlemen) log aaye the. They said they would buy the land from me and because the revenue records hadn’t changed, I sold it,” he said. Also Read | Wife’s land: Chhattisgarh Minister says didn’t know status, records say otherwise Click here

Sahu who continues to farm on the three acres he still owns, says, initially, he wasn’t aware who the real buyer of his land was. “It was only later that I found out that ‘mantriji’ had bought the land. Now it has been cordoned off and buildings inside are coming up on it,” he said.

About 500 m away, lining the main road, is a big gate, adorned with bamboo, complete with bronze metal carvings of leaves. Next to the gate is a green glass guard room. There is no name on the gate and the wall, with the carvings, with a small grass patch fenced off above it continues to another gate that is shut. To the right of the gate, where the wall turns, another concrete wall, with barbed wire to prevent any entry stretches out into the adjacent fields. The green room is manned by one person, suspicious and guarded. “Why are you here? Samaan leke aaye ho kya,” he asks. He refuses to be identified, and says he does not know what the plot is. Just inside the gate, a metalled road leads inside, with manicured trees along the side. There are concrete structures visible in the distance, large swathes of grass and evidence of ongoing construction in the distance.

The scheme under which Sahu gave the land to the government is under provisions set out by the Madhya Pradesh “bhu-rajasva” (land revenue) Act, 1959. The idea behind the concept of “daan” or “tyag” was that landowners could donate land to any government department, without anything in return, “for public good.” The Act continues to apply in Chhattisgarh to this day, with the state being carved out of Madhya Pradesh in the year 2000.

The act states that any landowner can donate their land, or parts of their land to any department of the government, after notifying the tehsildar with thirty days notice. The transfer of land requires two witnesses, after which the tehsildar is authorised to clear the transfer with no additional costs of change in the land records or stamp duty applying to the transaction.

A senior Chhattisgarh government official said, “The idea was that people could donate land to the government for public good, so that infrastructure could be built on it. The entire concept of the donation of land was that nothing was given in return. However, in most cases, people gave up parts of their land, so that infrastructure could be built around it, and the value of their remaining property would go up.”

No school, cartoons on TV, pup in her arms: child’s home waits for ruling on her abortion