Chhattisgarh ‘encounter’ probe indicts security forces: No firing by villagers, no proof they were Maoists

Security forces fired in panic, 6 of them injured in friendly fire, one villager shot next morning: Justice V K Agarwal 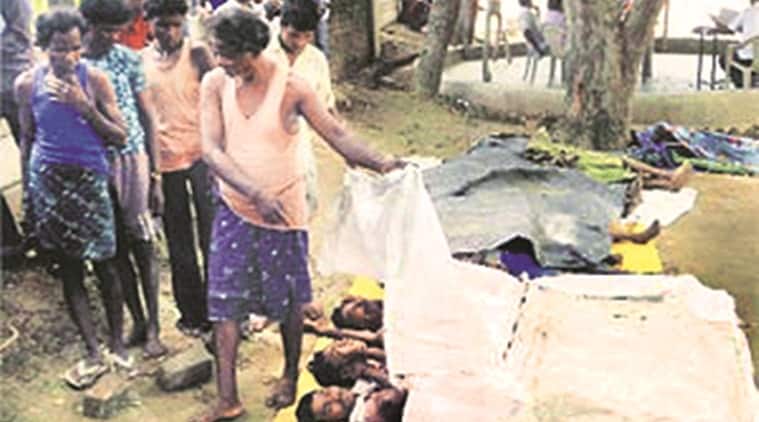 Panel was set up to probe deaths following protests

In a damning indictment of the security forces, a one-member judicial commission set up to probe an alleged encounter in which 17 people, including six minors, were killed in Sarkeguda, in Bijapur district of Chhattisgarh, in June 2012, has noted the following findings: there was no firing by the villagers; there is no evidence to suggest they were Maoists; the villagers were assaulted and killed from close quarters; security forces may have fired “in panic”; and one of the victims was shot in the morning, several hours after the encounter at night.

The commission chaired by Justice V K Agarwal, a retired Judge of the Madhya Pradesh High Court, submitted its report to the state government earlier this month.

The report, reviewed by The Sunday Express, says the injuries suffered by six security personnel were due to “cross-firing”, possibly by “bullets fired by fellow members of the security forces”, and there was “clear manipulation in investigation”. However, it also notes that the villagers’ claim that they were meeting to discuss a festival “appears highly doubtful”. 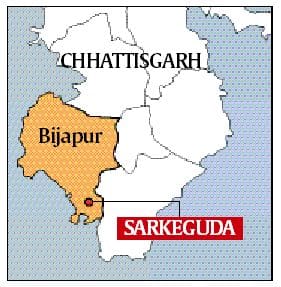 On the night of June 28, 2012, teams of the CRPF and Chhattisgarh Police, led by the former, had launched an operation to go to Silger, based on information about the presence of Maoists.

According to the sequence of events put forth by the security forces, two teams left from Basaguda and came across a Maoist meeting at Sarkeguda, 3 km away. The villagers attending the meeting opened fire, and the security personnel retaliated.

But the villagers claimed that they had assembled for a meeting to discuss a “Beej Pandum” festival, and the security forces had encircled them and opened fire. They also alleged that one person, Irpa Ramesh, was killed after being picked up from his home the next morning.

On July 11, 2012, the then Raman Singh-led government had ordered a judicial probe. Confirming that Justice Agarwal has submitted the report, a senior Chhattisgarh government official said: “A report has been received. The next step is to put it before the Cabinet, and, if accepted, before the Vidhan Sabha.”

Saying that statements of witnesses “from either parties suffer from discrepancies and shortcomings”, the report says evidence and circumstances on record will have to be “considered and discussed”. 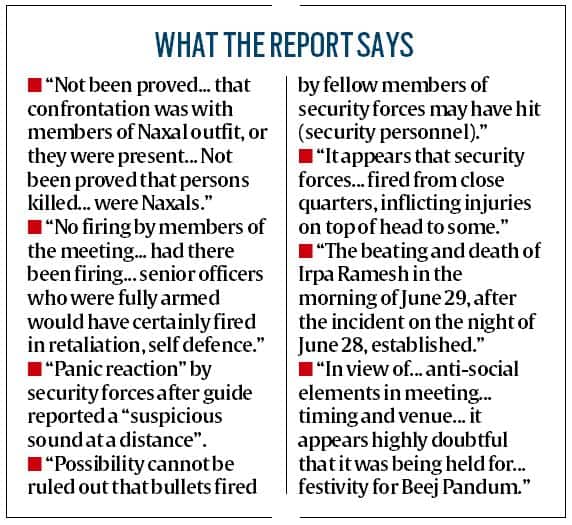 * On the fundamental question of whether Maoists were present at the meeting, it says: “It has not been proved by satisfactory evidence that the confrontation was with the members of the Naxal outfit or that they were present in or were participants of the meeting or in the incident of confrontation with the security forces. It has not been proved that the persons killed and injured in the incident other than security personnel were Naxals, as there is no satisfactory evidence in that regard.”

* Contradicting the security forces’ claim that the villagers had opened fire, the report says: “According to the version of the security forces, initially there was fire from the members of the meeting… (it) does not stand the test of scrutiny as leader of the team, DIG S Elango, had admitted that he did not see any muzzle fire coming from the direction of the place of meeting, contradicting his own earlier statement. The conduct of DIG S Elango as well as Deputy Commandant Manish Barmola of not firing a single bullet during the incident clearly indicates that there was no firing by the members of the meeting, because had there been firing from the persons present at the meeting, both the above senior officers who were fully armed would have certainly fired in retaliation and self defence. The conduct of DIG S Elango and Manish Barmola is against the normal human conduct and instinct of self-preservation and self-defence.”

* The report says it was likely that there was a “panic reaction” by security forces after their guide reported a “suspicious sound at a distance.” “Possibility therefore appears to be that suspicion having arisen regarding the present of Naxals, firing was initiated by members of the security forces, resulting in injury and death of several persons,” it says.

* The defence counsel, representing the CRPF and state police, had pointed out that six security personnel were also injured in the “encounter.” The report, however, says: “The nature of injuries sustained by the injured security personnel could not have been caused by firing from a distance, such as injury on the right toe or near the ankle. Secondly, the bullet injuries could only be caused due to cross-firing, as it appears more plausible, as it was dark all around in the place of the incident and possibility cannot be ruled out that bullets fired by fellow members of the security forces may have hit other members of the security personnel of the team.”

* The counsel for the villagers had said evidence shows that at least 10 of the 17 victims were shot in the back, suggesting that they were killed while fleeing. The probe panel has said that “bullets shot on the top of the head of some of the deceased shows that they were shot from close quarters, which could not be the result of firing from a distance as is the case of the defence force”.

“The result of consideration of material circumstances as above, including the nature and location of bullet injuries as also many other injuries, such as lacerated wounds and contusions, are circumstances which would go to show that the incident did not take place as is being described by the security forces. It also appears that firing by the security forces was not from a distance while they were under attack, and, in fact, it appears that security forces had confronted the members of the meeting and had fired from close quarters inflicting injuries on top of their head to some victims, while others were also hit on their torso and their back. Besides, members of the meeting were also physically assaulted due to which lacerated wounds and contusions were caused. These injuries could be caused from close quarters only by weapons with sharp edges or by hand and blunt objects such as butt of gun or rifles. There is no explanation from the security forces as to how the said injuries were caused to the deceased or injured,” says the report.

* On the villagers’ allegation that one of the victims was picked up from his home on June 29 morning, hours after the alleged encounter at 10:30 pm the previous night, the report says: “Shashikala Telam has stated that her brother Irpa Ramesh was beaten in the morning. Her statement is supported by Mutta Kaka who has stated that in the morning, while Irpa Ramesh was in his house and was peeping outside from there, the police personnel caught hold of him, beat him and then shot him dead. It was pointed out by the learned counsel that stills taken from the post-mortem video would also show that 15 dead bodies are lined up in sequence, who died in the night. However, the body of Irpa Ramesh was lying separately by itself, as per photograph taken from the video film, which is also indicative of the fact that he did not die in the night’s incident. Thus the beating and the death of deceased Irpa Ramesh in the morning of June 29, much after the incident on the night of June 28, stands established. It also casts serious doubt about the version of the incident as given on behalf of the security forces.”

While the toll was initially 16, one of the 11 injured died later, taking the toll to 17.

* Justice Agarwal, in his report, has called out “clear manipulation of investigation”. “It is pertinent to note that several other documents such as seizure memos etc. were also allegedly prepared on the spot in the morning i.e. before FIR was recorded while crime number was not till then allotted to the incident. Yet those documents bear crime number which shows clear manipulation in investigation,” says the report.

* The commission has, however, cast doubt on the reason for the meeting between the villages of Sarkeguda, Kottaguda and Rajpenta. “Accordingly, on consideration of several factors and circumstances as above, and in view of the presence of anti-social elements also in the meeting, as also the timing and venue of the meeting and as it was being held in a clandestine manner, it appears highly doubtful that it was being held for the arrangement of festivity for Beej Pandum.”

* In the last part of the 75-page report, on his “recommendations for the future”, Justice Agarwal has said: “Security forces should be better trained and modern gadgets and means of communication should be made available to the forces for swifter command and more balance and guarded action in critical situations.”

He has also called for “training to improve the mental fabric of the security forces, with a view to make them more balanced, so that they act with equanimity and do not succumb to panic reaction even in a critical situation.” He says the forces should invest in bulletproof jackets, night vision, stronger intelligence, more communication with locals and better communication networks.