It will be put to vote again in November, and if India supports this, it will mark a radical shift in position given that it has backed a total ban on ivory trade since the 1980s. 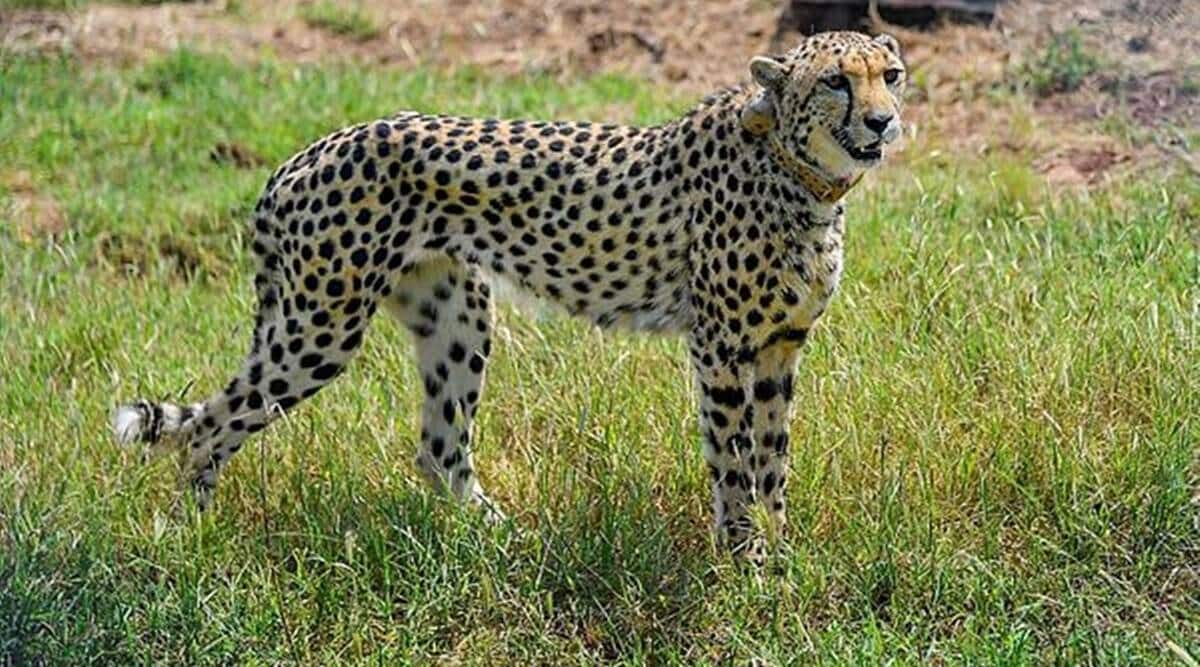 One of the cheetahs at Kuno National Park in MP. PTI file

In the deal it signed with Namibia to fly in cheetahs, India agreed to promote “sustainable utilisation and management of biodiversity” by supporting advances in this area of bilateral cooperation “at international forums including meetings of the Convention on International Trade in Endangered Species of Flora and Fauna” (CITES).

While the word “ivory” has not been mentioned, Namibia has already sought India’s backing, under the commitment to support “sustainable management” at the CITES, for its longstanding proposal to allow trade in ivory derived from elephants of Namibia, Botswana, South Africa and Zimbabwe.

It will be put to vote again in November, and if India supports this, it will mark a radical shift in position given that it has backed a total ban on ivory trade since the 1980s.

Asked if the agreement assured Namibia of India’s support on lifting the ban on ivory trade at the 19th meeting of the CITES Conference of the Parties (CoP19) due in Panama next month, India’s CITES management authority S P Yadav said: “We are still working on the stand of the Government of India.”

The Namibian side is more categorical. “It will be good if Namibia and other range countries are allowed to trade the ivory stockpiles. We have approached India to support us in this regard as per the provision of the agreement. With one more country supporting us, it increases our chances to succeed in our proposal,” Romeo Muyunda, chief public relations officer of Namibia’s Ministry of Environment, Forestry and Tourism, told The Indian Express.

Described as “historic” by Minister Yadav, the agreement has not been made public by either government.

An official, who was part of the negotiation process, said “the elephant was always in the room” since the “very beginning of our discussions” over cheetahs.

Also Read |The chronicles of conservation: The lion, the tiger, the cheetah and the politics

“The drafting took time and a direct reference was avoided to keep the matter open-ended. Namibia’s proposal was defeated 4:1 in 2019. Both parties understand that a similar scenario this time will make India’s vote inconsequential,” he said.

Namibia and the other three southern Africa countries – Botswana, South Africa and Zimbabwe – argue that their elephant populations have bounced back and their stockpiled ivory, if sold internationally, can generate much-needed revenue for elephant conservation and incentivising communities.

Opponents of the ivory trade counter that any form of supply stokes demand and that sharp spikes in elephant poaching were recorded across the globe after the one-off sales allowed by the CITES in 1999 and 2008.

Also Read |Cheetahs and others: know the 7 big cats

In 1999 and 2008, Namibia, along with Zimbabwe and, later, Botswana and South Africa, was permitted by CITES to conduct one-off sales of ivory stockpiled from natural elephant deaths and seizures from poachers.

Subsequently, Namibia’s proposal for allowing a regular form of controlled trade in ivory by delisting the elephant populations of the four countries from CITES Appendix II was rejected at the CoP17 (2016) and CoP18 (2019). It will be put to vote again at the CoP19 next month.

India has been against removing the ban on the international ivory trade despite having an ivory stockpile of an estimated 20-30,000 kg worth over $250 million, stored with the forest departments of various states.

Conservationist Vivek Menon, a member of multiple Indian delegations to CITES since the 1990s, said, “For over three decades, India has opposed international ivory trade. In fact, India and Kenya together sponsored the proposal in CoP12 (2002) to put the southern African elephants back in Appendix I. Irrespective of any commitment that may have been made, I expect India to maintain its strong stand against ivory export.”

Raman Sukumar, elephant expert and a member of the National Board for Wildlife, said, “If true, it is certainly a significant shift as India has supported a total ban on the export of all African ivory since the 1990s. However, it is not surprising to me that southern Africa countries, which have very large elephant populations, wish to derive economic benefits from large stocks of ivory from naturally dead elephants.”

It is learnt that the key areas of cooperation in the India-Namibia agreement are:

Legally binding on both parties, the five-year agreement will automatically renew for successive five-year periods unless it is terminated by either party through a six-month notice. The agreement can be amended mutually with a three-month notice.