As a fresh set of leaders takes over the government, seniors would work for the party ahead of the Gujarat Assembly elections due late next year, Yadav said, calling it a “new political philosophy” that sets a model for other parties and strengthens democracy. 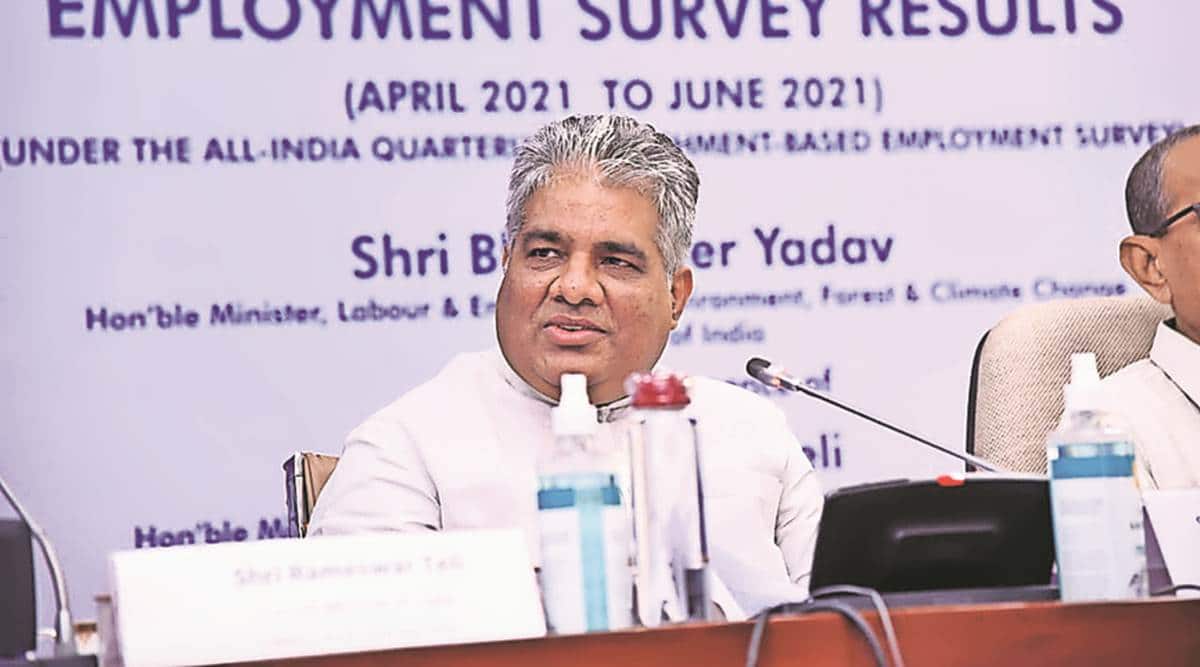 CHANGE of guard in BJP- ruled states was intended to bring up the next generation of leaders, and the complete revamp of the Gujarat government was a collective decision of the state and central leadership, Union Minister and party general secretary Bhupender Yadav said at an Idea Exchange session of The Indian Express.

As a fresh set of leaders takes over the government, seniors would work for the party ahead of the Gujarat Assembly elections due late next year, Yadav said, calling it a “new political philosophy” that sets a model for other parties and strengthens democracy.

“You can see change from several angles — change can be due to instability and for consistency, it can be for crisis management or for capacity building. One should also see change with objectivity,” the senior leader, who has overseen several elections for the party, said. “Fixing maximum age at 75 (to hold a post) and being careful in giving posts to family members of leaders etc are part of this, and every party has to take such decisions from time to time,” he added, while denying that the Gujarat changes were prompted by the perception of mismanagement during the second Covid wave.

With the Narendra Modi government often accused of consolidating powers at the Centre, including by sidelining own regional leaders, Yadav said the Prime Minister believed in “national ambition and regional aspiration”. Speaking in context of BJP ally NPP, led by Conrad Sangma, deciding to contest all the seats in the coming Manipur elections, Yadav said Modi supports strengthening regional powers and leadership.Yadav has been named the election in-charge of the BJP for the Manipur elections.

Differentiating the revamps in the BJP from those by the Congress, most recently in Punjab where it replaced Chief Minister Amarinder Singh, Yadav said: “In the Congress, in Bihar from 1977 to 1990, every eight-nine months, the CM was changed. But our change is different. We have been in power in Gujarat for a long time, so some senior leaders had been ministers for a long time. They decided to give opportunity to new faces. The entire Council of Ministers decided to work for the organisation and go to elections with new faces in the government.”

However, Yadav said, it didn’t mean that the party was going to implement similar changes in other states like Madhya Pradesh, saying it believed in “change on the basis of self-consciousness” and that it was not “an enforcement agency”.

On the WHO’s new guidelines for air quality, which are more stringent than before, Yadav, who holds the Environment portfolio, said: “These are just suggestions. They have themselves said these are not binding… (However) I would like to inform you that even before the guidelines came, we had set up an IIT-Kanpur study committee to look into the issue and are awaiting their report.’’

On whether the climate targets India had set itself as per the Paris Agreement would be raised or not ahead of the COP 26 conference in Glasgow, Yadav said this was a decision that will be taken “at the highest level”. “There are two issues — first is to enhance the existing targets, the second is to achieve these targets. Ultimately, the carbon emissions that are there globally, are we moving towards reducing those holistically? We have achieved many of these targets already.”

Asked about the recurring criticism against the Environment Ministry and its committees for diverting forest land for infrastructure development, the minister said this was done to assist the poor and tribals living in the area. “If (some land) has been diverted, what is the problem? And who is this diversion done for? It is done so that the poor people and tribals who live in that area receive electricity… so that roads reach them. This is the only reason forest land is diverted, for no other reason. And even those decisions are thoroughly examined,” he said.