Central Bureau of Investigation case hearing in Supreme Court today: The protest by the opposition came even as the Supreme Court directed the Central Vigilance Commission to complete its inquiry against Alok Verma and his deputy Rakesh Asthana within two weeks.

Congress president Rahul Gandhi on Friday was detained by Delhi Police Friday, while staging a protest in the national capital, demanding the reinstatement of CBI Director Alok Verma, who was divested of his administrative powers and sent on leave earlier this week. Gandhi, who was detained in Lodhi Colony police station, has now been released.

“Prime Minister Narendra Modi has destroyed each and every institution in the country. Be it the CBI or the Election Commission. He is attacking each and every institution. And there’s only one reason behind it – Chowkidar chor hai. He has put Rs 30,000 crore in Anil Ambani’s pocket,” Rahul had said. The protest march to the CBI headquarters was joined by top Congress leaders who demanded an apology from the PM.

Reacting to the agitation, Union Home Minister Rajnath Singh said, “The Congress doesn’t have any people’s issues to raise which is why they are taking up these non-issues. We should wait for the investigation report.”

The protest by the opposition came even as the Supreme Court directed the Central Vigilance Commission (CVC) to complete its inquiry against Verma and his deputy Rakesh Asthana within two weeks. A three-judge bench, headed by CJI Ranjan Gogoi, heard Verma’s plea challenging the government’s order earlier in the day. It appointed former judge Justice (retd) AK Patnaik, to supervise the CVC inquiry.

The Supreme Court today heard the pleas challenging the removal of Alok Verma as CBI Director. The court will hear Rakesh Asthana's plea on October 29. Read in Malayalam and Tamil.

Castigating the Narendra Modi-led government over the ongoing feud in the Central Bureau of Investigation, former prime minister Manmohan Singh on Friday stated that the environment in the country’s institutions like CBI is being vitiated. His remarks came hours after Congress President Rahul Gandhi was detained for holding protests against the BJP government over the removal of Alok Verma as CBI Director.

Castigating the Narendra Modi-led government over the ongoing feud in the Central Bureau of Investigation, former prime minister Manmohan Singh on Friday stated that the environment in the country’s institutions like CBI is being vitiated. His remarks came hours after Congress President Rahul Gandhi was detained for holding protests against the BJP government over the removal of Alok Verma as CBI Director.

Here is the Chronology of events in CBI case

Dec 3: Asthana made interim CBI director after the retirement of then chief Anil Sinha.

July 12, 2018: While Verma was abroad, CVC calls a meeting to discuss promotions, seeks to know who will attend it. CBI responds Asthana has no mandate to represent Verma.

Oct 20: CBI raids Kumar's residence and office at its headquarters, claims to have seized his mobile phones and iPads.

Oct 22: CBI arrests Kumar alleging he "fabricated the statement" of businessman Sathish Sana, facing probe in a case involving meat exporter Moin Qureshi and had paid bribes to get relief.

Oct 26: SC directs CVC to complete inquiry into the complaint against Verma in two weeks, seeks response of CVC and Centre on Verma's plea challenging government order. Directs Rao not to take major or policy decisions, to file in sealed cover his decisions taken till now. SC notice to Centre, CBI, CVC, Asthana, Verma and Rao on NGO's plea, lists the matter for Nov 12. (PTI)

Congress leader took out a march to the CBI office Friday protesting against Prime Minister Narendra Modi's alleged attempt to 'politicise' the central investigating agency Senior party leaders marched to the local CBI office at Muttathara as part of a nation-wide agitation called by the All India Congress Committee (AICC) demanding reinstatement o CBI Director Alok Verma, who has been divested of his power and sent on leave Leader of Opposition in the assembly Rames Chennithala, who inaugurated the march, made a scathing attack on the Prime Minister and alleged that Modi was the 'mos corrupt politician' the country had ever seen 'The CBI, the country's highest investigating agency has lost its glory and pride,' he said. (PTI)

Over 40 Congress members and leaders have been detained including eight MLAs and former state unit chief, protesting against Centre's decision to remove Verma in front of CBI office in Ahmedabad today.

Prior to detention, Congress activsts marched from a church to the CBI office, a kilometer stretch. We detained 47 Congress workers and leaders, including (party's former state unit chief) Bharatsinh Solanki and eight MLAs. They were released after some time,' Gandhinagar Superintendent of Police, Mayur Chavda, said. The legislators, who took part in the protest and were taken into custody by the police included Shailesh Parmar, C J Chavda, Himmatsinh Patel and Imran Khedawala, among others. Congress raised slogans against Prime Minister Narendra Modi.

Congress activists protest outside CBI office in Punjab and Haryana

Ahead of the protest, police had barricaded the roads leading to the CBI office in Sector 30 and when protesters attempted to cross the barricades, water cannon were used by the police to disperse them. 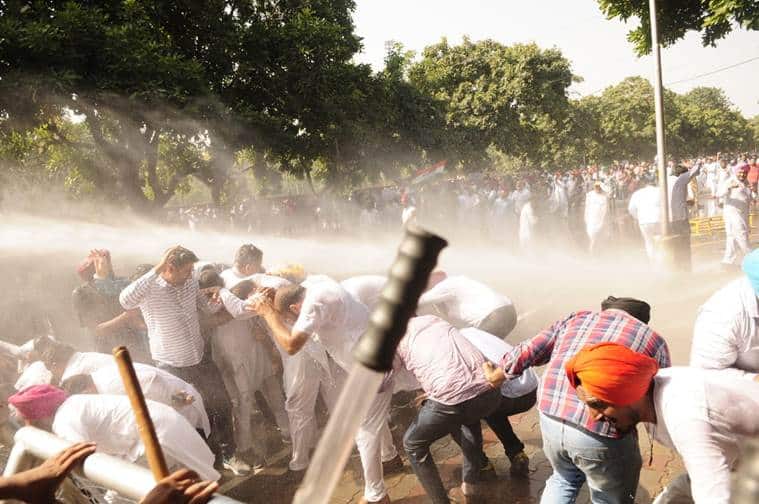 Congress activists protest against Centre's decision to divest CBI Director Alok Verma outside CBI office in Bengaluru. Karnataka Congress MLAs and corporators did not take part in the protest and legislators were directed to participate in the agitation, reported PTI.

As senior party functionaries were not present during the protest, Congress spokesperson Subhash Agarwal said the agitation was only symbolic and the presence of MLAs and corporators did not matter. "We only wanted to convey a message to the Centre, which we successfully did. The agitation started at about 11.30 am and went on for about one-and-half hours," he said, as reported BY PTI.

The demonstration is led by Odisha Congress Committee President Niranjan Patnaik who raised slogans and alleged that Verma was sent on leave to stall investigation into charges of corruption in Rafale deal. Sporting black T-shirts, activists attempted to enter the CBI office in Odisha, however, were stopped by the security personnel at the gate. Patnaik further alleged that people of Odisha, particularly the victims of a multi-crore chitfund fund, have been cheated by Special Director CBI Rakesh Asthana, who was in-charge of the probe into the case.

Congress President Rahul Gandhi has been released from Lodhi Colony police station after being detained for protesting in front of the CBI headquarters. 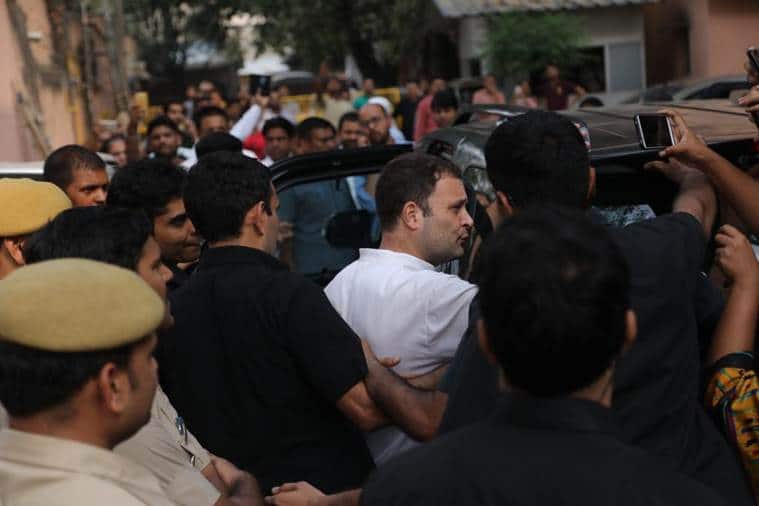 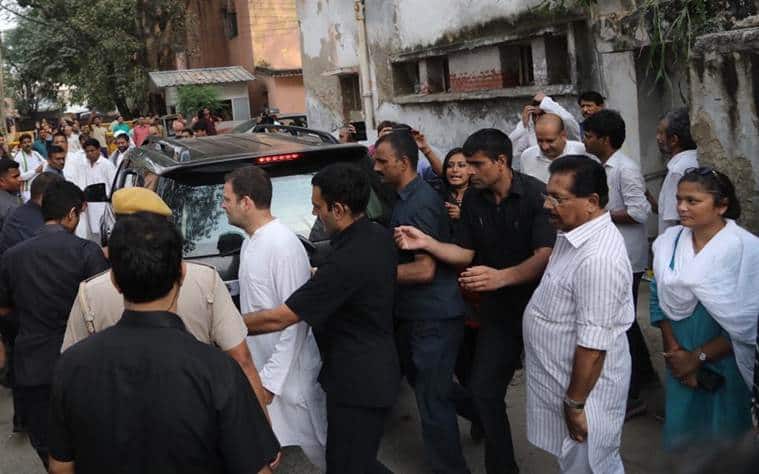 PM acted against CBI Director, it was an act out of panic: Rahul Gandhi

PM can run, he can hide but in the end, truth will be revealed. Removing #CBI Director will not help. PM acted against CBI Director; it was an act out of panic: Congress President Rahul Gandhi after leaving Lodhi Colony police station in Delhi pic.twitter.com/w5QJfREUMm

Rahul Gandhi in Lodhi Colony police station after being detained for protesting in front of CBI headquarters, Delhi. 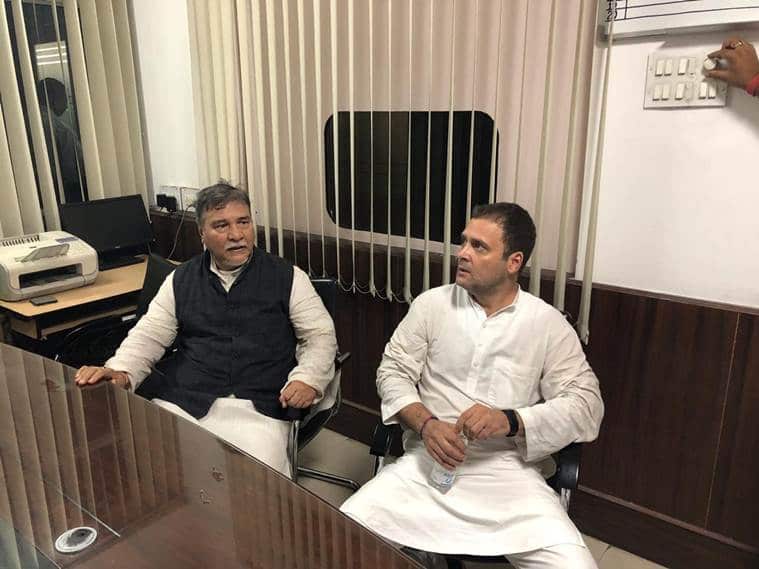 All CBI officers must be beyond suspicion: Jaitley

#WATCH: FM Arun Jaitley says,"All officers of the CBI, particularly the top two officers like Caesar's wife must be beyond suspicion." pic.twitter.com/qlA1eLOCtH

Rahul Gandhi is on his way to Lodhi police station in New Delhi to court arrest.

Reacting to the court order, Union Finance Minister Arun Jaitley said, "The SC has today further strengthened the fairness criteria. They have fixed a time limit and have ordered to ensure that highest standards are maintained even in the highest enquiries. It is trying to ensure that the CVC probe is absolutely fair. The truth coming out is in the larger interest of India. That was the object behind the CVC's direction, the objective behind the government's move based on the CVC's suggestion. The SC order only adds to that fairness, precisely why the government welcomes the order."

Speaking to reporters during the protest, Rahul Gandhi said, "Narendra Modi has destroyed each and every institution in the country. Be it the CBI or the Election Commission. He is attacking each and every institution. And there's only one reason behind it - Chowkidar chor hai. He has put Rs 30,000 crore in Anil Ambani's pocket. Congress will not let Chowkidar indulge in a theft. The opposition will not let Chowkidar do so."

Hari Ram, a daily wage labourer hailing from Madhya Pradesh, caged and being presented to Rahul Gandhi at the Congress' protests outside CBI headquarters. It symbolises CBI, which is a "caged parrot", the party said. @IndianExpress pic.twitter.com/dxsXZLzxRI

Both Verma and Asthana -- CBI’s warring No 1 and No 2 -- were sent on leave and their offices were sealed on Tuesday after the duo accused each other of corruption. On Thursday, the investigative agency, however, clarified that Verma and Asthana will remain as Director and Special Director respectively.

With the row escalating further, the Opposition has cornered the NDA government over the issue of independence of public institutions and has also questioned its move to send Verma on forced leave, divesting him of his powers. Congress chief Rahul Gandhi alleged that the move was a “panic reaction” by Prime Minister Narendra Modi who knew that he would be “finished” if the CBI began an inquiry into the Rafale fighter jet deal. He said the decision to remove Verma and appoint M Nageshwar Rao as CBI Interim Director was “illegal” and “criminal”. Without naming Rao, Gandhi said, “The charge has been given to an individual who has cases against him…so that the Prime Minister can control him. The PM has made a corrupt officer in charge (of CBI) so that an inquiry into Rafale does not take place.”

Senior Congress leader Mallikarjun Kharge, on the other hand, wrote a letter to Prime Minister Narendra Modi and questioned the removal of CBI Director Alok Verma. In a three-page letter to the PM, Kharge, the leader of Congress in Lok Sabha, argued that neither the central government has the authority to remove the CBI director nor the Central Vigilance Commission (CVC) has the right to recommend one. Verma and CBI Special Director Rakesh Asthana were sent on leave on Tuesday night.