Centre vs Mamata: CBI plea in SC on Tuesday

In Kolkata Monday, the Bengal government sought immediate hearing on the CBI attempt to question Kumar but the Calcutta HC declined to take it up and listed the matter for Tuesday.

The Supreme Court Tuesday will take up for hearing the CBI’s plea against Kolkata Police Commissioner Rajeev Kumar. The agency has alleged that Kumar is “destroying electronic evidence” in connection with the Saradha chit funds case and he should be directed to “immediately surrender/make himself available” for investigation.

In Kolkata Monday, the West Bengal government sought immediate hearing on the CBI attempt to question Kumar but the Calcutta High Court declined to take it up urgently following objection by the central government counsel and listed the matter for Tuesday.

The CBI approached the Supreme Court Monday saying it “apprehends” Kumar is “destroying electronic evidence” and he should be directed to “immediately surrender/make himself available” for investigation.

During the hearing, the bench led by CJI Ranjan Gogoi said it found "nothing" in the plea to substantiate apprehension about destruction of evidence. However, the CJI added, “if you (CBI) can lay down any material… forget that he (police commissioner) is doing, that he is even remotely thinking, we will come down so heavily on him that he will regret it”.

The matter will come up for hearing at 10.30 am this morning. Here's what went down in the Supreme Court on Monday.

Centre vs West Bengal: What to watch out for today

As the drama between the Centre and West Bengal continues to unfold, here is what we're watching out for today.

* The Supreme Court will take up for hearing at 10.30 am the CBI's petition against Kolkata police chief Rajeev Kumar

* The Calcutta High Court will hear the West Bengal government's plea against the CBI's attempt to question Kumar.

* The HC had declined an urgent hearing MondayWest Bengal Chief Minister Mamata Banerjee continues to sit on dharna in Kolkata. She has alleged "misuse of police to take control of the police and all other institutions".

A day after its move to question Kolkata Police Commissioner Rajeev Kumar on the chit funds scandal in West Bengal led to a standoff with the state government, the CBI approached the Supreme Court Monday, saying it “apprehends” Kumar is “destroying electronic evidence” and he should be directed to “immediately surrender/make himself available” for investigation. A bench of Chief Justice Ranjan Gogoi and Justice Sanjiv Khanna fixed 10.30 am Tuesday to hear the plea and said it will be open to the parties to produce any evidence to substantiate the CBI fear that anyone in West Bengal, including police, are planning to destroy evidence in the case.  Read More Here 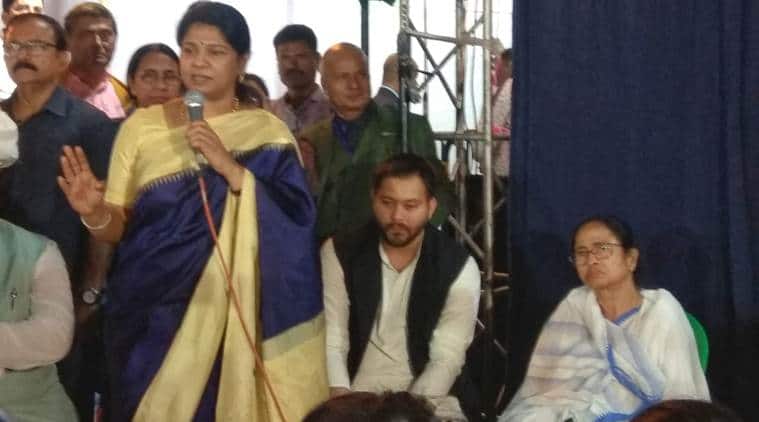 Even as the CBI-Bengal government imbroglio turned into another event to showcase Opposition unity against the Modi government ahead of the 2019 elections, the CPI(M) took a guarded approach. CPI(M) leader Brinda Karat said both the CBI's actions and Mamata Banerjee's dharna were "politically motivated". "CPI(M) has been demanding swift punishment to the guilty in the Saradha scam, but for so many years CBI under BJP was in slow motion. Now its actions are clearly politically motivated as is the 'drama dharna' of Mamata Banerjee," she said.

CBI has filed a contempt plea in the Supreme Court against West Bengal's chief secretary, director general of police and Kolkata Police commissioner for wilful and deliberate violation of apex court's orders.

CBI has filed a contempt plea in the Supreme Court against West Bengal's Chief Secretary, Director General of Police and Kolkata Police Commissioner for wilful and deliberate violation of apex court's orders. pic.twitter.com/iA5oHKPLtb

Amid the CBI-Bengal government tussle, Assam Congress on Monday accused the probe agency of not taking action against state Finance Minister Himanta Biswa Sarma over his alleged involvement in the multi-crore Saradha chit fund scam. "The CBI is yet to take any action against Sarma and investigations against him have stopped after he joined the BJP," PTI quoted Assam Pradesh Congress spokesman Pradyut Bordoloi as saying. West Bengal Chief Minister Mamata Banerjee had alleged on Sunday that Sarma was involved with the chit fund scam while he was in Congress.

In the afternoon, Mamata Banerjee attended a West Bengal Police and Kolkata Police event beside the dharna spot. Kolkata Police Commissioner Rajeev Kumar was also present. Praising the state police force, Banerjee said the cops work in stressful conditions and should be given due respect. "A policeman who has worked for his entire life, if he is not given respect, we will not accept it. Whether its rain or thunder, our policemen perform their duty. Not easy to organise pujas at such a huge scale. Our policemen do it," Banerjee said at the event. Mamata Banerjee: Ready to give my life but won't compromise

As Mamata Banerjee's dharna against CBI's bid to question Kolkata police chief in chit fund cases entered the second day, the West Bengal chief minister said she was ready to give her life but won't compromise. "I did not take to the streets when you touched TMC leaders. But I am angry when they tried to insult the chair of the Kolkata Police Commissioner, he is leading the organisation," ANI quoted Banerjee as saying. Her reaction comes after BJP leader Ravi Shankar Prasad asked why a CM was protesting for a police chief while she did nothing when her MPs and leaders like Madan Mitra, Sudip Bandhopadhyay, Kunal Ghosh and Tapas Pal were arrested.

Even as Mamata Banerjee continued her dharna, which has now crossed 21 hours, Samajwadi Party national vice-president Kiranmoy Nanda joined her at the protest site near Esplanade in Kolkata. Asserting that the CBI's attempt to question Kolkata Police chief was a 'conspiracy' hatched by the BJP ahead of the Lok Sabha polls, Nanda said the saffron party was itself ridden with corruption. "The Supreme Court order (asking the CBI to probe the ponzi scam) came in 2014. Now it is 2019. The elections are around the corner... This is a conspiracy. The biggest scamsters are in the BJP -- Amit Shah, Narendra Modi," IANS quoted Nanda as saying.

Anyone who cares for Democracy, Federalism and Constitution must stand with Ms @MamataOfficial.

Sirji, what's happening? Why are we playing with fire through the much maligned, disgraced and condemned govt institutions?
That too when the elections are around the corner...
By targeting the tried and tested mass leader with impeccable image, ‘Bengal Tigress’ @MamataOfficial

BJP MP from Asansol in West Bengal and Union Minister Babul Supriyo demanded imposition of President's rule in West Bengal as he slammed Chief Minister Mamata Banerjee, accusing her of aligning with those indulging in corruption. Supriyo said Banerjee was doing a "drama" and creating a constitutional crisis to shield her "corrupt and tainted accomplices". "President's Rule should be imposed on West Bengal to control this 'Rogue' #TMchhi Govt under a corrupt CM Mamta Banerjee," he tweeted.

On dharna, West Bengal Chief Minister attended an event to give out awards to Kolkata Police personnel. Kolkata Police chief Rajeev Kumar, who is under CBI lens regarding missing documents and files of ponzi scam cases, was also in attendance at the event.

A series of events on Sunday led to West Bengal Chief Minister Mamata Banerjee's indefinite dharna in Kolkata. A CBI team landed up at Kolkata Police Commissioner Rajeev Kumar's residence on Sunday evening in connection with the Saradha and Rose Valley chit fund scams. However, some members of the team were taken into custody by the Kolkata Police, following a scuffle.