Split down the middle with less than a year to go for Assembly elections, the Congress is trapped in a face-off between Chief Minister Captain Amarinder Singh and challenger Navot Singh Sidhu. 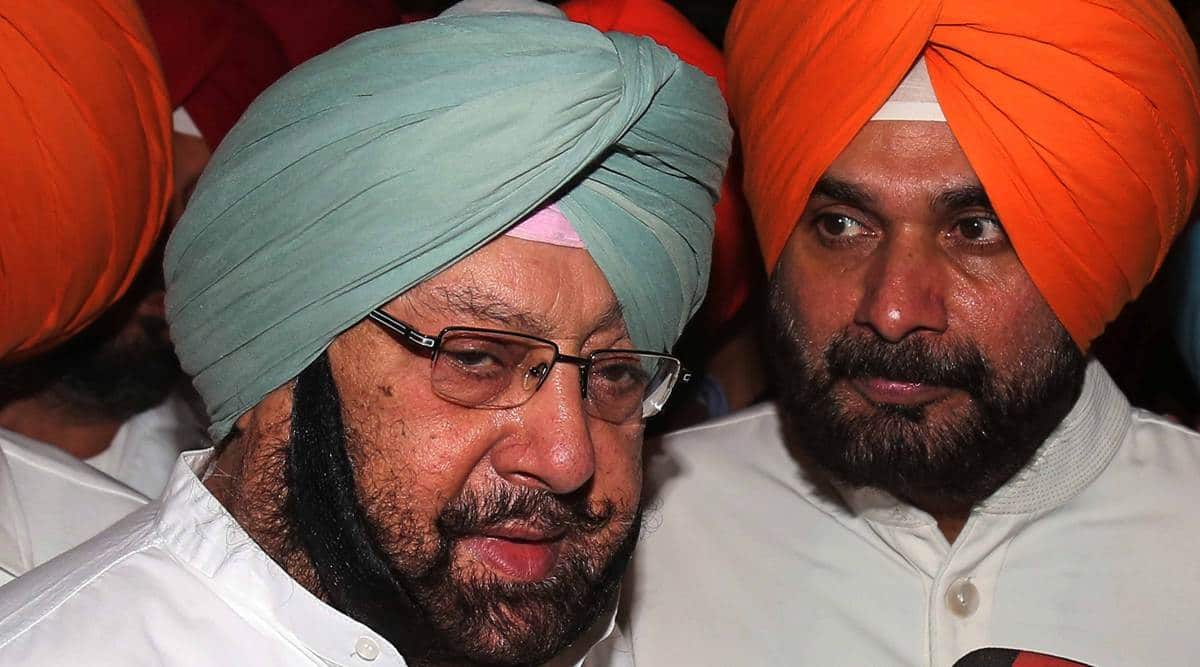 Amarinder Singh and Navjot Singh Sidhu have been at loggerheads over various issues. (File Photo)

“Six months ago, the consensus was that we will win hands down in 2022, now we find ourselves standing in a queue.’’ In Attari, 3 km from the Pakistan border, this is how local Congress MLA Tarsem Singh D C described the predicament that has gripped the ruling party in Punjab.

Split down the middle with less than a year to go for Assembly elections, the Congress is trapped in a face-off between Chief Minister Captain Amarinder Singh and challenger Navot Singh Sidhu. So much so that the party’s high command in Delhi was forced to set up a three-member panel to try and find a way out, even summoning about 150 leaders from Punjab last month to get a sense of the crisis.

Since then, the embattled state unit has been waiting for word from Delhi. The Indian Express, meanwhile, travelled across Punjab — Doaba, Majha and Malwa — and spoke to at least 25 party legislators to record the word on the ground.

It found several dissonant notes, and one chorus: the high command must find a speedy resolution, ideally one that keeps Amarinder and Sidhu together, before it’s too late. Apart from Punjab, only Rajasthan and Chhattisgarh have Congress-led governments in power.

In Punjab, where the Congress currently has 80 seats in the 117-member Assembly, the political crisis was triggered early April by the High Court’s clean chit to SAD supremo and former chief minister Parkash Singh Badal in the Kotkapura police firing on protesters in the desecration case.

Sidhu, who had been lying low after quitting the Cabinet in 2019 following a reshuffle in which he was divested of his portfolio, stepped out to slam Amarinder for “mishandling” the investigation. Soon, he was joined by a clutch of ministers.

Within days, the political heat escalated with Sidhu amplifying a number of complaints at the grassroot-level against the government: high power tariffs due to alleged faulty purchase agreements, lack of jobs, allegations of inaction against drug traffickers, and murmurs of the Chief Minister being inaccessible.

Several MLAs from the Malwa region, which has 69 Assembly seats, told The Indian Express that the party must punish those guilty of sacrilege. “This issue decimated the Akalis. If we don’t do the rightful and the needful, it will cost us,’’ said Kushaldeep Singh Dhillon, Faridkot MLA. The Majha and Doaba regions have 25 and 23 seats, respectively.

Dalvir Singh Goldy, a first-time legislator from Dhuri in Sangrur, said the “general feeling” is that no one monitored Kunwar Vijay Pratap Singh, who headed the SIT probing the case. “It’s odd that he quit the police force and joined AAP soon after the High Court quashed the SIT,” Goldy said.

A senior MLA from Malwa, who has won every election he’s contested so far, said he made it clear to the three-member panel that if the party didn’t make good on its promises, he would not contest next year. Another MLA agreed: “If you see a well in front of you, will you jump?”

Referring to the protests against power outages, an MLA from Doaba asked: “Didn’t the power department know that a power plant was being decommissioned, and there would be higher demand in the paddy season?” The Chief Minister holds the power portfolio.

Besides, complaints of inaccessibility and red tape echoed across the state. Some of the younger MLAs complained that it isn’t easy to meet the Chief Minister and his officers. “I am fortunate to be born with a legacy, I have contacts, I can muscle my way through but not others,” said an MLA from a political family in Malwa.

In Amritsar, an MLA pointed out that even Ministers, especially those who had rebelled against the Chief Minister, were often missing in the secretariat. “I can understand the CM has to deal with the Centre and other matters, but what about these Ministers?’’ the MLA said.

Calling for weeding out “non-performers”, two MLAs from Malwa pointed out that only three Ministers from the BJP government in neighbouring Haryana retained their seats in 2019.

Many also resented what they described as “promises that were impossible to keep”. “(Poll strategist) Prashant Kishor coined the slogan, ‘ghar ghar rozgar’. But we have to suffer the consequences. Where are the jobs? And Capt sprinkled salt on people’s wounds by giving an inspector’s job to the son of a wealthy legislator,’’ said another MLA, referring to the controversy over government jobs being given to the sons of two MLAs, Fateh Jung Singh Bajwa and Rakesh Pandey.

But then, there’s the big question that no one has an answer to: How to rehabilitate Sidhu?

Asked if the state party chief’s post was an option, ex-MLA from Garhshankar in Doaba, Luv Kumar Goldy, is clear: “We are pure Congress workers, we have been working for the party all our life. Yet, you have people parachuting from BJP, AAP and Akali Dal, and getting ministerial berths by eating into our share.”

Some are “wary of Sidhu’s mood swings”. A Jalandhar legislator close to Sidhu recounted how, at a recent meeting, he conveyed to the former cricketer that if he’s already stopped taking his calls now, what would happen if he were to become CM. Another MLA from Ludhiana said Sidhu should be kept as a “bullara” (speaker) as “people enjoy listening to him”.

Without naming anyone, Randeep Nabha, the MLA from Amloh, cautioned that “personality-based and vindictive politics are a deterrent to development”.

What’s clear, meanwhile, is that there is no call for sweeping change.

Almost all the MLAs The Indian Express spoke to said they had funds for development in their constituency. “Capt saab has recently released new grants. You should see the parks and solar lights I have installed in the villages in my constituency. We are also building playgrounds,’’ said Santokh Singh Bhalaipur, from Baba Bakala in Majha.

In Malwa, a critic of Amarinder said he had “no problem with Capt continuing as the CM as long as he fulfilled his promises, and was more accessible”. As a veteran MLA put it: “What we really need is a strong redressal system.’’

A legislator from Ludhiana said most of their woes would be addressed if the CM starts attending his office twice or thrice a week. “We don’t have a problem with him, but with his coterie. He has given unbridled power to his officers and that is leading to red-tapism,’’ the MLA said.

In Ludhiana, Kuldeep Vaid, a former Punjab-cadre IAS officer who’s the MLA from Gill, called Amarinder an “able administrator”. A Dalit leader from Doaba said Capt and Sidhu are poles apart. “Capt is an intellectual, he writes books, he is the guarantor of communal harmony. Yes, it’s not easy to meet him, but is there anyone who can replace him at this juncture?’’ the leader said.

“We don’t want the high command to foist a newcomer on our head,’’ said Navtej Cheema, a legislator from Sultanpur Lodhi in Doaba.

Many are hopeful that this storm will blow over. Likening the rift to a “family quarrel”, Jasbir Singh Dimpa, who defeated SGPC chief Bibi Jagir Kaur in the Parliamentary seat of Khadoor Sahib in Majha in 2019, said the party will stand united. “When elders intervene, all differences are forgotten,” he said.

But Sunil Dutti, MLA from Amritsar North, spoke for many when he said: “The sooner we resolve the issue, the better it will be.’’