Citizenship Amendment Act (CAA) Protest Today HIGHLIGHTS: Gogoi said the Congress government in Assam he had headed had set up detention camps in the state as per a Gauhati High Court order.

“Modi is a liar,” Gogoi said at a press conference in Guwahati.

Citizenship Amendment Act (CAA) Protest Today HIGHLIGHTS: Calling out PM Narendra Modi’s claim that there is no detention camp in the country, senior Congress leader Tarun Gogoi Friday termed him a “liar”, adding that the BJP-led government at the Centre had sanctioned Rs 46 crore for one in Assam’s Goalpara district.

“In 2018 the Narendra Modi government had sanctioned Rs 46 crore for constructing the largest detention centre at Matia in Goalpara district of Assam for housing 3,000 illegal immigrants. Suddenly he says there is no detention camp,” Gogoi said while addressing a press conference in Guwahati.

In Mumbai, two rallies were organised on Friday —one against the amended Citizenship Act and another in favour of the new law. Students and activists gathered at Azad Maidan to voice against the Citizenship Amendment Act and the proposed National Register of Citizens (NRC), while BJP’s Sanvidan Sanman Manch drew a massive crowd at August Kranti Maidan supporting the controversial law.

Earlier in the day, a huge crowd gathered outside Old Delhi’s Jama Masjid after the Friday prayers to protest against the new citizenship law, including Congress leader Alka Lamba and former Delhi MLA Shoaib Iqbal. Lamba hit out at the central government, saying “unemployment is the real issue in the county, but you (PM) are trying to put people in a queue for NRC, as it was done during demonetisation”.

Students of Jamia Milia Islamia observed a day-long hunger strike today against alleged police brutality during the protests against the amended citizenship law.

The pupils demanded an impartial judicial inquiry into the deaths and violent action during the agitation, release of illegally detained protestors and the arrest of those involved in violence. Their other demands included medical aid to those injured in alleged police brutalities, compensation to those whose property were destroyed in police action and end to arbitrary communications blackout.

The opposition Left Front and the Congress on Friday took out a joint rally in Kolkata to protest against the contentious amended Citizenship Act and the proposed National Register of Citizens.

The Kerala government Friday rejected reports that it was planning to build detention centres that would hold people who illegally entered the country, convicted foreigners waiting for deportation and those whose visas might have expired. A statement from the office of Chief Minister Pinarayi Vijayan clarified that it had put on hold all measures for the same taken by the previous government.

According to the chief minister’s office, a letter directing home secretaries of states to build detention centres was first sent by the then Union government in August 2012. The Union government’s instruction was that such centres would be used to hold those who entered the country illegally, foreigners overstaying in India despite their visas expiring, and convicted foreigners waiting for legal issues to be resolved before their deportation. The Congress-led UPA was in power at the time. Read more

Members of the Muslim community observed fast (roza) and prayed after Iftar for the restoration of peace in the country in the wake of the growing protests against the amended citizenship act.

BJP national general secretary Ram Madhav attributed incidents of violence over Citizenship Amendment Act as "political and communal conspiracy", alleging that opposition parties along with some communal forces were making false propaganda about the CAA.

"You have seen brutal attacks on ordinary police constabulary at different places during the violent agitation,’’ BJP leader said, adding that political parties should ask people to desist from such actions as police are performing their duty.

The protesters supporting the Bhim Army Friday burnt the copy of the Citizenship (Amendment) Act during a protest against the new law and NRC organised at Mangalwar Peth in Pune. 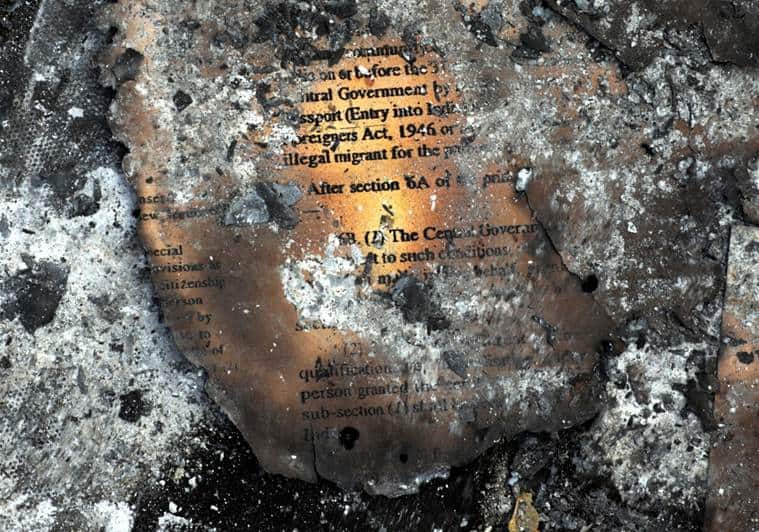 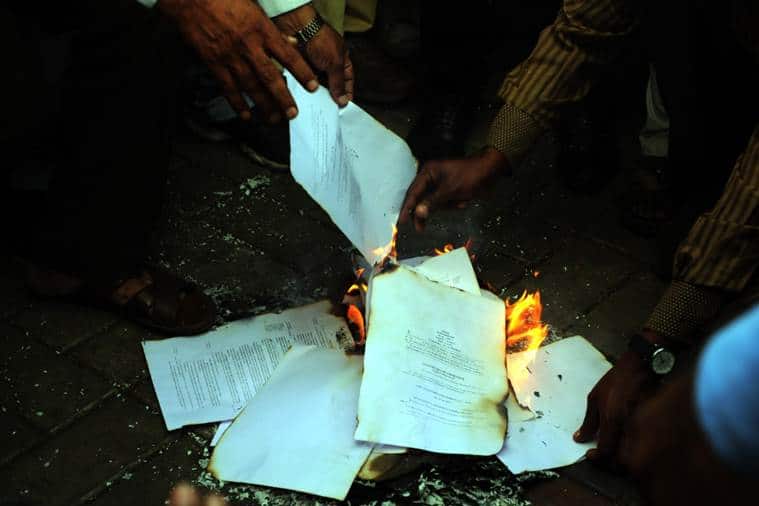 The AMU Teachers' Association has called for a judicial probe into the clashes between police and students during a protest against the amended citizenship law last week, PTI reported. The association also demanded that 'false cases' against Aligarh Muslim University (AMU) students be immediately withdrawn and guilty police personnel be punished as per the law. Without these it will become difficult to restore normalcy on the institute's campus, the teachers' body said.

Amid the ongoing turmoil in the country over the newly amended Citizenship Act, Union Home Minister Amit Shah Friday challenged Congress leader Rahul Gandhi to show him a single line in the Act regarding the withdrawal of anyone’s citizenship.

“The Congress and company is spreading rumours that Muslims may lose their citizenship," Shah said addressing a rally at Shimla’s Ridge Maidan.  Read more

All entry & exit gates of Lok Kalyan Marg are open.

CAA does not strip any Indian of citizenship: Fadnavis

Heading the BJP's Sanvidan Sanman Manch' rally in Mumbai, former Maharashtra CM Devendra Fadnavis reiterated that the Citizenship (Amendment) Act does not take away the citizenship of any Indian national, PTI reported.

"Pakistan did not fulfill the (implicit) assurance during Partition that minorities will be protected (in both the countries). Hence India has to look after them because they are our people," said the Leader of Opposition in the Maharashtra Legislative Assembly.

A rally in favour of the Citizenship Amendment Act took place in Mumbai's August Kranti Maidan, where a massive protest against the Citizenship Act was held last week. In the rally organised by BJP's Sanvidan Sanman Manch', supporters of CAA were seen carrying national flags along with placards with pro-CAA and NRC messages and shouting slogans.

They were also carrying photographs of Dr Babasaheb Ambedkar. Big photographs of V D Savarkar, Mahatama Jyotiba Fule, Bharatmata and Shahu Maharaj were displayed on stage. The march was planned from August Kranti Maidan to Lokmanya Tilak statue at Girgaum, however, the Mumbai Police denied them permission for the march citing law and order issues.

After offering Friday prayers, hundreds of people gathered outside Jama Masjid in Old Delhi to protest against the controversial citizenship law. Congress leader Alka Lamba and former Delhi MLA Shoaib Iqbal were among those who joined the demonstrations.

Lamba hit out at the central government, saying 'unemployment is the real issue in the county, but you (PM) are trying to put people in a queue for NRC, as it was done during demonetisation'.

'It is very essential to raise the voice of democracy for the country and for the Constitution. A central government cannot become dictatorial and impose it agenda on people,' PTI quoted Lamba as saying. Mumbai: Student leaders from Delhi, UP praticipate in 'Inquilab Morcha'

In Mumbai, students activists from Delhi and Uttar Pradesh gathered at the ground to participate in the 'Inquilab Morcha' to raise their voice against the citizenship act, National Register of Citizens (NRC) and National Population Register (NPR). The protest had been curtailed to demonstrate at Azad Maidan in south Mumbai after the police denied permission. 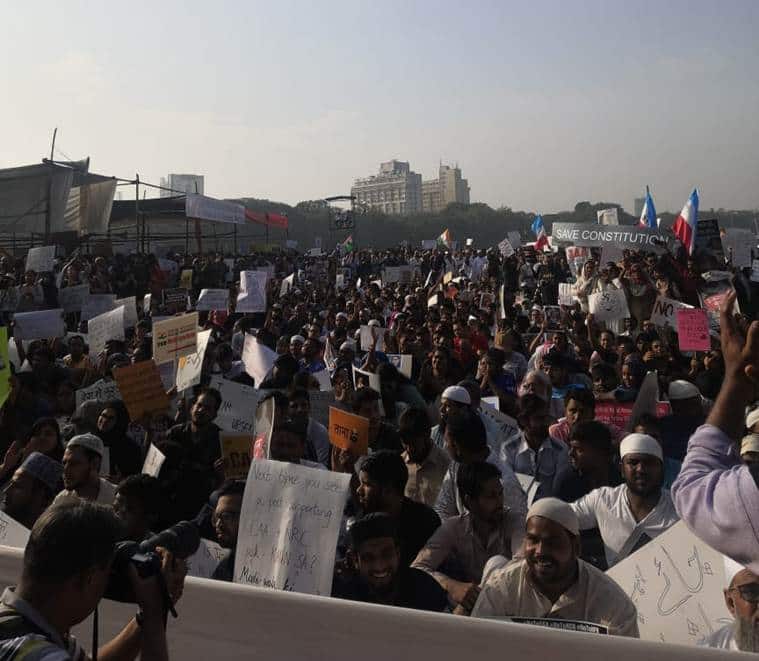 Friday prayers in UP pass off peacefully: DGP

The Friday prayers in Uttar Pradesh have been concluded peacefully, PTI quoted DGP OP Singh as saying. Taking preventive measures ahead of the prayers and possible protests, UP Police imposed alert on all districts. Internet services were suspended in Meerut, Ghaziabad, Muzaffarnagar, Bulandshahr, Shamli and Agra.

The DGP had instructed all officers in the districts, police ranges and zones to stage flag marches in sensitive areas.

The Delhi Metro Rail Corporation (DMRC) has closed the entry and exit gates of Lok Kalyan Marg and trains will not be halting at this station. The move comes after several protesters marching towards the PM's residence at Lok Kalyan Marg were stopped by the Delhi Police. The protesters demanded the release of Bhim Army chief Chandrashekhar Azad and rollback of the new citizenship law. 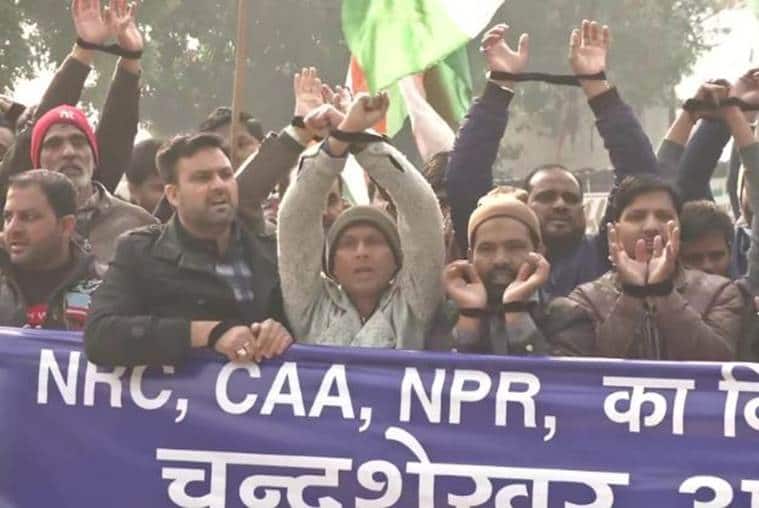 Protests in Ajmer against CAA

Scores of people, including khadims of the Ajmer dargah, took out a protest march against the amended Citizenship Act in Ajmer, demanding a rollback of the law, PTI reported. "The Centre should repeal the Act, which is an attack on the Preamble of the Constitution. The government should also say that the NRC (National Register of Citizens) will not be implemented (countrywide)," PTI quoted Sarwar Chisty, a khadim of the dargah, as saying.

Slogans like "long live communal harmony" were raised by the protesters. They also burnt an effigy of Deewan Zainul Abedin Ali Khan, the spiritual head of the dargah, accusing him of misleading Muslims on the issue of the amended Citizenship Act.

Protesters detained outside UP Bhavan

Delhi Police has detained a group of protesters who attempted to stage a demonstration outside the Uttar Pradesh Bhavan against the alleged police action in the state following the agitation over the Citizenship (Amendment) Act, PTI reported. The Jamia Coordination Committee, which comprises students from various political groups active on the campus, had called for a "gherao" of the UP Bhawan.

There was heavy security deployment outside the Bhavan and as soon as some protesters arrived, they were detained and taken to the Mandir Marg police station. Hundreds of people marching towards Prime Minister Narendra Modi's residence to demand the release of Bhim Army chief Chandra Shekhar Azad and to voice their protest against the CAA and the NRC were stopped by police today. The protesters took part in the march with their hands tied so they can't be blamed for violence and arson during the protest. The protesters, including Bhim Army members, began marching from the Jor Shahe Mardan Qarbala in Jor Bagh and were stopped by police at a barricade on the way to the prime minister's residence in Lok Kalyan Marg a few kilometres away. 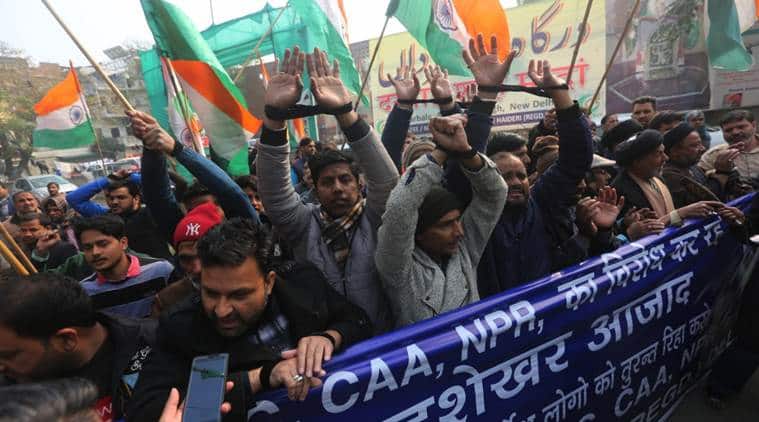 Several people gathered outside the iconic Jama Masjid in Old Delhi to protest against the amended citizenship law. Congress leader Alka Lamba and former Delhi MLA Shoaib Iqbal were among those who joined the demonstrations. According to PTI, Lamba hit out at the BJP government saying 'unemployment is the real issue in the county, but you (PM) are trying to put people in a queue for NRC, as it was done during demonetisation'

In Uttar Pradesh, according to figures released by the DGP Headquarters, the 327 cases lodged so far relate to charges of arson, vandalism, attempt to murder, rioting, attack on police force and violation of CrPC Section 144. Preventive detentions have been made under CrPC Section 151 (arrest to prevent the commission of cognizable offences).

In Mumbai, the planned march against the Citizenship (Amendment) Act, National Register of Citizens (NRC) and National Population Register (NPR) from Byculla to CSMT has been curtailed to a demonstration at Azad Maidan after Mumbai Police denied permission for the rally over the six-km route that passes through some of the most congested parts of the city.

The protest will now take place at Azad Maidan from 3 pm. “We were not given police permission for the rally. The police told us permission was refused for fear of violence. However, the struggle will continue,” said an organiser.