The Aam Aadmi Party swept the Rajinder Nagar bypolls in Delhi with a margin of around 11,000 votes on Sunday. Tripura CM Manik Saha won the Town Bardowali bypolls by 6,104 votes, defeating his nearest rival and Congress candidate Ashish Kumar Saha. Manik Saha needed to win this election to continue as the CM. YSR Congress Party’s Mekapati Vikram Reddy won by a huge margin in Andhra Pradesh’s Atmakur, defeating the BJP candidate by a margin of 82,888 votes.

In Tripura, the BJP won three out of four seats with Chief Minister Dr Manik Saha emerging victorious in his first-ever direct electoral battle from the Town Bardowali constituency. The BJP also won the Jubarajnagar and Surma seats in the Tripura bypolls. Meanwhile, the Congress party made a comeback of sorts by winning one seat and the CPI(M) and the TMC ended with zero seats.

In a setback to the Akhilesh Yadav-led Samajwadi Party (SP), the BJP on Sunday emerged victorious in both Azamgarh and Rampur seats in the by-elections to the UP Lok Sabha constituencies. BJP candidates Dinesh Lal Yadav “Nirahua” (Azamgarh) and Ghanshayam Singh Lodhi (Rampur) defeated SP nominees Dharmendra Yadav and Asim Raja respectively by margins of 8,679 and 42,192 votes.

Barely three days after the Bhagwant Mann-led AAP government in Punjab marked its 100 days, the Sangrur bypoll outcome has come as a sobering reminder that a record poll sweep can be followed by a humiliating electoral defeat.

Sangrur, the pocket borough of Chief Minister Mann, had catapulted him into the political stage by electing him with a record margin of over 2 lakh votes in the 2014 general elections. Mann had got re-elected from Sangrur in 2019 Lok Sabha polls by over 1 lakh votes. The bypoll was necessitated when he resigned from the seat after taking over as the CM on March 16. Read more The YSR Congress Party scored a huge victory in the bypoll for the Atmakur Assembly constituency in Andhra Pradesh’s Nellore district on Sunday as its candidate Mekapati Vikram Reddy defeated the BJP candidate by 82,888 votes.

The 49-year-old is the younger brother of Mekapati Goutham Reddy, the previous MLA from the constituency and the state industries minister who died of a heart attack on February 21. Their father was the four-time Lok Sabha MP from Nellore, Mekapati Rajmohan Reddy.

Vikram is the managing director of the family’s company KMC Constructions Ltd that his father had founded. The company is into the development of infrastructure, manufacturing, and construction. Vikram is also associated with at least 13 other companies floated for infrastructure development. Read more

The bypoll was necessitated when the incumbent Sangrur MP Bhagwant Mann resigned from the seat after becoming the CM in March following the AAP’s landslide victory in the state Assembly elections. It was considered to be the first test of the fledgling Mann-led AAP government’s popularity.

Pushed to the margins of Punjab’s mainstream politics for over two-and-half decades, the 77-year-old pro-Khalistan leader and ex-IPS officer Simranjit Singh Mann’s stunning win is likely to boost the Panthic politics in the border state. Read more 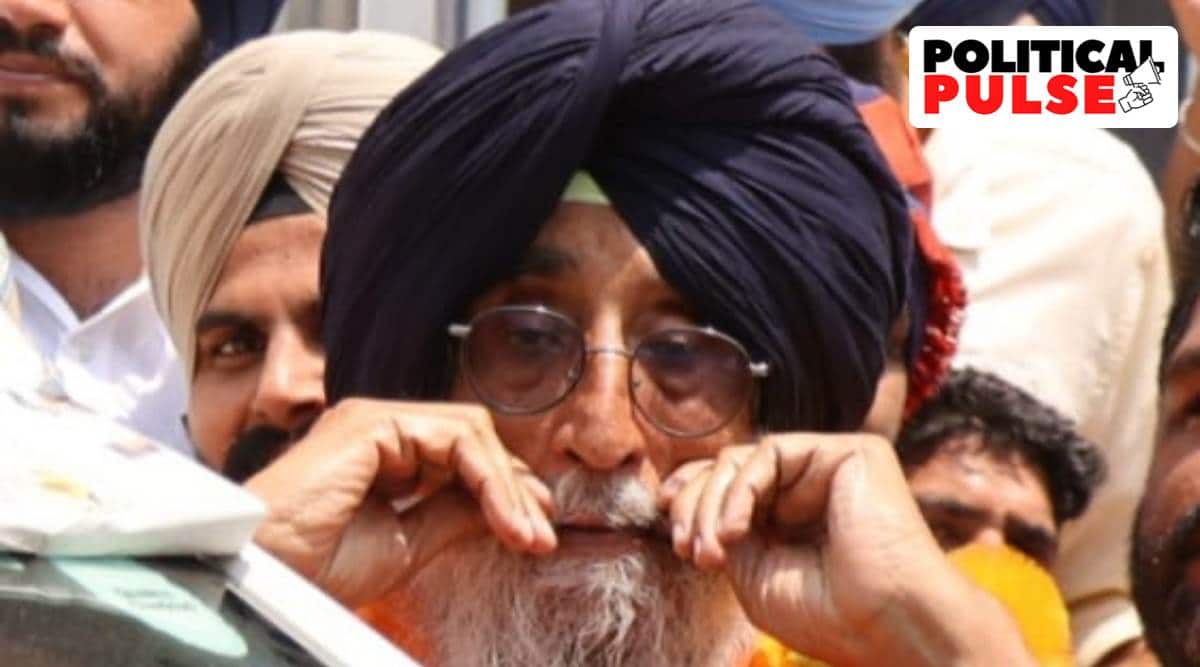 Hours after the results of the by-poll to Tripura Assembly were announced, sporadic incidents of of violence were reported from different parts of Agartala city including a clash near the state Congress headquarters at Post Office Chowmuhani.

The Congress party alleged that a group of BJP-backed goons attacked it’s supporters, stabbed a youth Congress activist, pelted stones at the party headquarters, tore down a makeshift office, and left the state Congress president wounded with head injuries.

Congress leader Rahul Gandhi took to Twitter, and wrote, “I strongly condemn the vicious attack on our leaders & workers by BJP goons following @INCIndia’s win in the Agartala bypoll. The people are with us. Shameful that the police stood as mute spectators instead of stopping the attack. These BJP goons must be brought to justice”. Read more

In a setback for the Samajwadi Party but a bigger personal jolt for senior party leader Azam Khan, BJP candidate Ghanshyam Singh Lodhi won the Rampur Lok Sabha by-elections by defeating SP nominee and Khan’s long-time associate Asim Raja by a margin of over 42,000 votes.

The Election Commission of India is yet to announce the result formally but local SP and BJP leaders confirmed that Lodhi has been declared the winner.

Lodhi got over 3.67 lakh votes whereas Asim Raja scored around 3.23 lakh votes. NOTA voted third most number of votes—4,447. The BSP did not contest the Rampur bypoll and that helped the BJP with shifting Dalit votes. Read more

The counting was held at the Atmakur Engineering College, and Reddy was in the lead after the first round itself. The YSRCP led in both ballot and postal votes. Out of the 605 postal ballots, 205 were valid. From these, YSRCP secured 167 votes. Read more

The Aam Aadmi Party won the Rajinder Nagar bypolls in Delhi with 55.76 per cent votes. The BJP, meanwhile, accounted for 39.92 per cent and the Congress, 2.79 per cent of the votes. A total of 545 votes went to NOTA's account

In both the SP bastions in Uttar Pradesh, BJP is leading. In Rampur, BJP has a lead of 11,484 votes. And in Azamgarh, the saffron party is leading with 1,814 votes.

SAD (A)'s Simranjit Singh Mann is leading by 5,628 votes as counting for Sangrur bypolls is underway.

UP bypolls: BJP takes the lead over SP in Azamgarh, Rampur

AAP leads by over 10,00 votes in Delhi's Rajinder Nagar

In Uttar Pradesh, the Samajwadi Party candidate was in the lead by over 12,623 votes in Rampur, according to the latest trends. While in Azamgarh, SP is behind BJP by just 170 votes.

After the eighth and the final round of counting for the bypolls in Town Bardowali, Tripura CM Manik Saha was leading by 6,104 votes ahead of his nearest contestant and Congress candidate Ashish Kumar Saha. Manik Saha needs to win this election to continue as the CM.

The ruling YSR Congress Party’s Mekapati Vikram Reddy Sunday headed towards a big win in the Atmakur bypoll in Andhra Pradesh, leading by over 66,000 votes at the end of round 16. Counting is going on briskly and Reddy’s lead has been increasing with each round, and at the end of round 16, he had secured 81,636 votes.

The bypoll was held on June 23 which was necessitated after the demise of Mekapati Goutham Reddy, who was YSR Congress Party MLA and Industries Minister, on February 21 due to a heart attack.

At the end of round 16 counting, the BJP’s G Bharat Kumar Yadav had garnered 15,159 votes while the BSP candidate N Obuleshu secured 4,012 votes. NOTA votes were 3305.

With the Sangrur Lok Sabha seat witnessing a neck and neck battle between the AAP and SAD (A) candidates, supporters of Akali Dal's Simranjit Singh Mann gathered in Sangrur. (Express Photos by Gurmeet Singh) 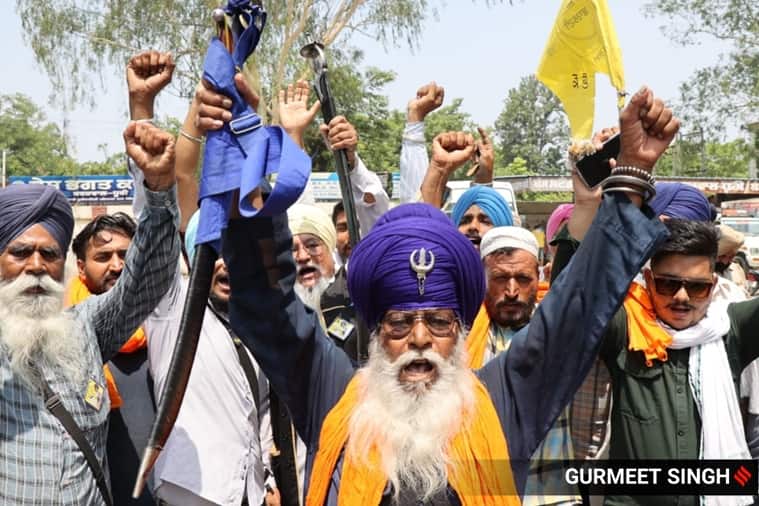 After seven out of 16 rounds of counting, AAP took a comfortable lead of over 5000 votes in the Rajinder Nagar bypolls.

After six rounds of counting, AAP has taken a lead of around 3,000 votes.

According to the latest trends, Tripura Chief Minister Dr Manik Saha is leading by 5,186 votes ahead of his nearest contestant and Congress candidate Ashish Kumar Saha at the Town Bardowali assembly segment at the end of the seventh round of counting.

At the Agartala constituency, Congress heavyweight candidate and former minister Sudip Roy Barman is leading with a margin of 32,38 votes ahead of his nearest BJP candidate Dr Ashok Sinha, who secured 12,123 votes at the end of the seventh round of counting. CPIM candidate Krishna Majumder secured 6,146 votes.

BJP candidate Malina Debnath was found leading at Jubarajnagar seat at the end of the eighth round of counting with a margin of 4,320 votes ahead of her nearest contestant and CPIM candidate who secured 14,061 votes.

Congress secured 1,418 votes at the end of the eighth round at the Jubarajnagar seat while Trinamool Congress scored 1,073 votes.

People queue up at a polling station to cast their votes for the Sangrur Lok Sabha bypolls, in Sangrur, Thursday. (PTI)

While Sangrur in Punjab recorded 45.3 per cent voter turnout, the polling percentages at Rampur and Azamgarh were 41.3 per cent and 49.43 per cent, respectively. Till the end of polling hours, Rajinder Nagar Assembly constituency recorded 43.75 per cent voter turnout, while the four Assembly seats in Tripura saw an overall polling percentage of 78.58. Nearly 67 per cent voters exercised their franchise in the bypolls to Atmakur constituency in Andhra Pradesh. In Jharkhand, 56.03 per cent turnout was reported in the Mandar assembly bypoll in Ranchi district.

In Rampur, the BJP fielded Ghanshyam Singh Lodhi, who recently joined the party. Asim Raja, handpicked by Azam Khan is the SP candidate. The Mayawati-led BSP is not contesting from Rampur.

In Sangrur, the bypoll was necessitated following the resignation of Chief Minister Bhagwant Mann from the Lok Sabha after he was elected as an MLA in the state assembly elections earlier this year. Mann had won the Sangrur seat in the 2014 and 2019 parliamentary elections.