Most hotels in Srinagar, Gulmarg, Pahalgam and Sonmarg are fully booked till the end of June, as per a representative of the J&K Hotel and Restaurant Association. 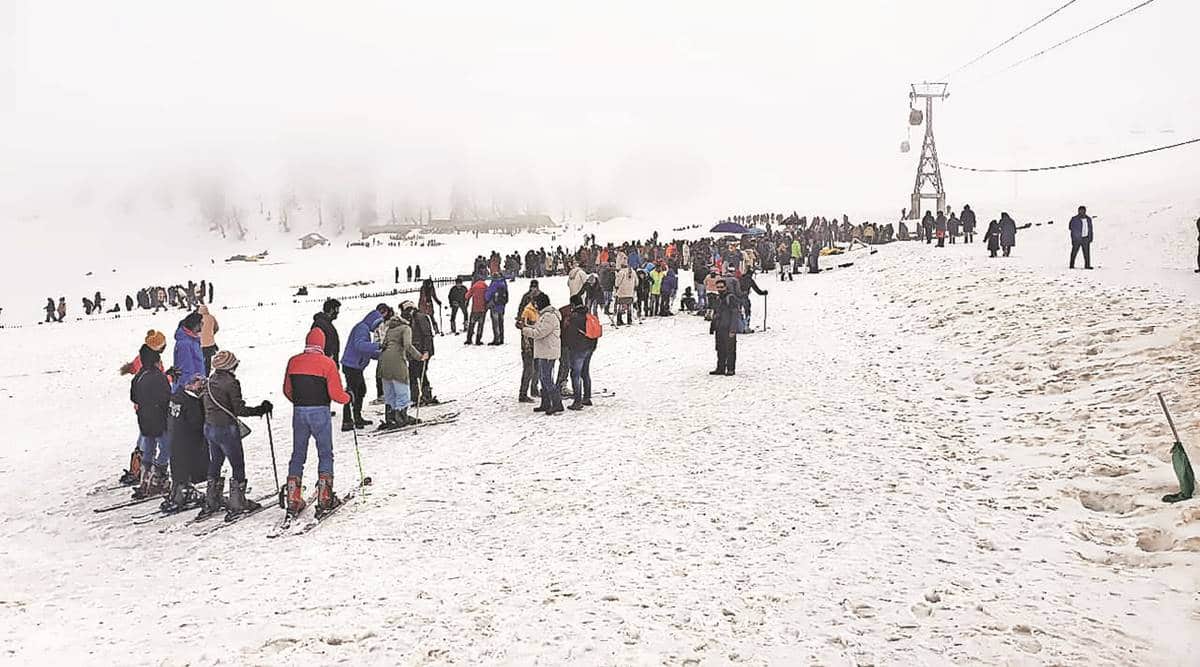 Tourists enjoy the snow in Gulmarg. (Express Photo by Divya A)

After suffering a setback over the last few years following the killing of Hizbul militant Burhan Wani in 2016, the Centre’s decisions on August 5, 2019, and the Covid-induced lockdown last year, the tourism sector in the Valley has been witnessing a busy tourist season since heavy snow in January — with the blooming of tulips in spring signalling the onset of peak season.

“We have seen such good bookings after many years. Suddenly when it snowed on December 15 last year, Kashmir was among the first tourism destinations to open, so that helped not just the economy but also enhanced people to people contact. Most of the big hotels have clocked 70 per cent bookings till June even as increasing Covid numbers are expected to give little setback since a lot of tourists this year were coming in from Maharashtra,” said Mushtaq Ahmad Chaya, chairman of J&K Hoteliers Association and mentor of the Kashmir chapter of the PHD Chamber of Commerce and Industry.

In the last weekend of March, the Boulevard Road in Srinagar along the Dal Lake was bustling with people, and as Holi and Shab-e-Baraat coincided, shikaras had a field day — charging upto Rs 1,200 for an hour’s ride instead of the usual Rs 100. The Tulip garden was thrown open to the public last Thursday, and has recorded as many as 50,000 visitors on a single day.

Most hotels, not only in Srinagar, but also in neighbouring Gulmarg, Pahalgam and Sonmarg are fully booked till the end of June, as per a representative of the J&K Hotel and Restaurant Association.

Ahsan Chisti, Deputy Director of the Tourism Department, stated, “Everyday during January and February, more than a thousand tourists have landed into Srinagar. The last two to three months have given us hope.”

Zaffar Rayan Baba, who operates a travel company called Baba Travels in Srinagar, claimed “the last time we saw such activity and such heavy bookings was in 2011-12”.

While ski slopes around the world have suffered because of the pandemic, Gulmarg is having one of its busiest seasons ever. By mid-March, it had registered over 1.5 lakh people, way above any other season for at least three decades. Since international visitors are still a distant dream, it is the domestic travellers who would have otherwise gone skiing in Europe, or holidaying in Dubai or Thailand, said Baba, adding that with 40 hotels (where demand has led to skyrocketing rentals), Gulmarg supports livelihood for as many as 20,000 local residents.

It is also the mandatory Covid testing at airports and railway stations that is giving psychological reassurance to families and groups travelling together.

Last week, while sharing pictures of the majestic tulip garden on the foothills of the Zabarwan Mountains, Prime Minister Narendra Modi tweeted, “Whenever you get the opportunity, do visit Jammu and Kashmir and witness the scenic Tulip festival. In addition to the tulips, you will experience the warm hospitality of the people of Jammu and Kashmir.”

“Peace has returned to Kashmir after so many decades, it’s time we must cash in on this,” Lieutenant Governor Manoj Sinha said recently, adding, “We have increased the budgetary allocation for the tourism sector, and the government is also working on developing other tourism destinations.” He also assured the filmmakers of adequate security while shooting in Kashmir.

In the 2021-22 annual budget, the government has allocated Rs 786 crore to the tourism sector — a hike of Rs 509 crore from this year’s budget. A chunk of this pie — in terms of road shows and marketing events — will be devoted towards promoting inbound tourism in Kashmir and the Northeast, according to sources in the Ministry of Tourism.