Border stand-off: Ajit Doval is likely to visit China for meeting of BRICS NSAs on July 26-27

Asked whether the border stand-off was raised by Modi with Xi in Hamburg, Ministry of External Affairs’ official spokesperson Gopal Baglay said, “I would leave it to your imagination and common sense on what should be covered in ‘range of issues’.” 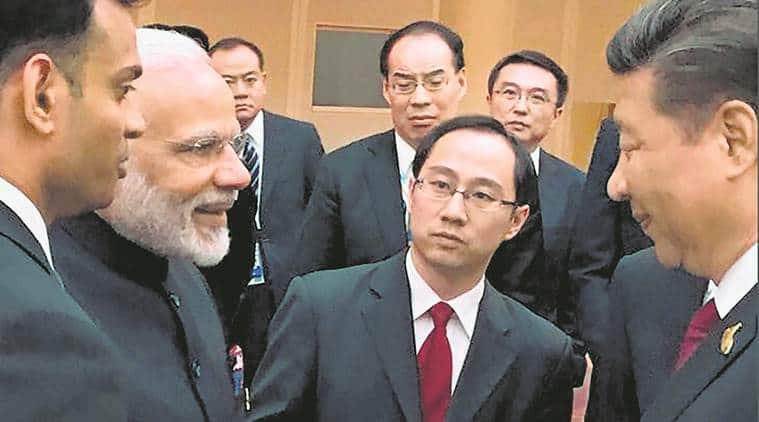 WITH CHINA raising the pitch on the border stand-off over the last two weeks, India on Thursday maintained a measured tone, saying that diplomatic channels were “available” and were “being used” to address the situation. Sources told The Indian Express that National Security Advisor Ajit Doval is likely to visit China on July 26-27 for the BRICS NSAs’ meeting hosted by his counterpart, Chinese State Councillor Yang Jiechi. Both are also the Special Representatives designated by their governments to discuss border issues.

New Delhi, meanwhile, also reiterated that Prime Minister Narendra Modi and Chinese President Xi Jinping had a “conversation” on a “range of issues” on the sidelines of the BRICS leaders’ meeting last week in Hamburg. The Chinese government had said that there was no official meeting between the two leaders.

Asked whether the border stand-off was raised by Modi with Xi in Hamburg, Ministry of External Affairs’ official spokesperson Gopal Baglay said, “I would leave it to your imagination and common sense on what should be covered in ‘range of issues’.”

Elaborating on Foreign Secretary S Jaishankar’s views in Singapore, that there was no reason why India and China will not be able to deal with border issues, Baglay said the two sides have accumulated a lot of experience from the past in addressing various issues.

Without commenting specifically on the aggressive opinion pieces and editorials run by the Chinese state-run media on the stand-off, Baglay said, ”It is really not for me to comment on the editorials and opinion pieces appearing in the media. This matter that we are dealing with is a serious matter. It has implications for us, for a number of reasons. Therefore, we remain engaged in addressing that matter. We have outlined our approach… I would like to confine myself to what is the approach of the Government of India, what is our thinking in terms of addressing a situation, a dispute that we are dealing with right now.”

On whether the Chinese government had changed its position, the MEA spokesperson said, “What I said was that you should look at the matter comprehensively. I said that last month we issued a statement which reflected our approach/position on that particular matter and also the larger issue. Then I said that there was a conversation between PM Modi and President Xi Jinping on a range of issues after the informal meeting of BRICS leaders at Hamburg on July 7. Then I said that diplomatic channels remain available… I would like to request you to see everything in a comprehensive manner.”

Asked about India’s strategy following the Chinese statements, he said, “Obviously, I am not an astrologer so I can’t predict what will happen tomorrow. But, I can certainly say that the approach that we had underlined and put out at the end of last month, that continues.”

On Bhutan’s role in the issue, Baglay said it would not be appropriate for him to comment on a “third friendly country”.

Asked about China’s statements on the situation along the LoC — it expressed willingness to play a “constructive role” — he said India’s position on bilaterally resolving all matters with Pakistan, including the Kashmir issue, had not changed.Baglay said the central issue between the two countries was “cross-border terrorism perpetrated on India”. “Terrorism was impacting peace in India and peace and stability in the entire region and the world,” he said.

Baglay said the central issue between the two countries was “cross-border terrorism perpetrated on India”. “Terrorism was impacting peace in India and peace and stability in the entire region and the world,” he said.

Asked if Congress Vice-President Rahul Gandhi had informed the government about his meeting with the Chinese Ambassador, he replied in the negative and said that the MEA does not keep track of the activities of foreign embassies and did not deal with political parties.

This is the second official response from India on the issue over the last fortnight. On June 30, in its first statement after Chinese attempts to extend a road in the disputed Doklam area near Sikkim, the government had said that New Delhi has conveyed that such construction would represent a “significant change of status quo” with “serious security implications” for India.