Insha took her exams in November 2017 at Mohammadiya Institution, a privately run school in her home town in Shopian. 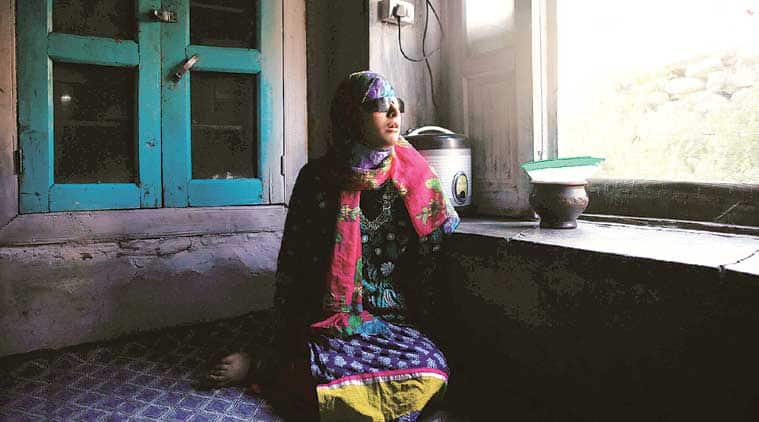 Insha Mushtaq, among the youngest victims of pellets fired by security forces during the 2016 unrest in Kashmir, passed her class 10 examinations on Tuesday.

Beaming with happiness, the 17-year-old, whose blinding became a rallying point against the use of pellet guns by security forces, shared the news first with her mother and then her two brothers.

“It was difficult,’’ Insha told The Indian Express. “But I am happy to have passed. I am ready for the next class.”

Insha took her exams in November 2017 at Mohammadiya Institution, a privately run school in her home town in Shopian. She said she took the help of a writer, her friend Nina, and an extra half an hour.

“Three tutors came to my home every day. They read text books to me. I would repeat them the next day,” she explained.

As she could not do that with mathematics, Insha said, she replaced the subject with music. “I am still learning Braille,” she said.

Her mark sheet says “qualified but to improve”. Her GPA ranges between 6 and 8 for her five subjects. “I am happy with my result,’’ she said.

The results for the Class 10 exams for the J&K State Board of Secondary Education were declared on Tuesday. After the announcement, social media was inundated with congratulations for Insha.

Former chief minister Omar Abdullah tweeted, “A special shout out to young Insha who was blinded by pellets during the 2016 protests & has cleared her 10th exams today. May Allah keep rewarding your hard work & efforts.”

Her father Mushtaq Ahmad Lone spoke of her determination. “None of us in the family could help her with her subjects. She and her tutors spend hours on getting good grades,” he said.

Insha was 15 when she was blinded, three days after the killing of Hizbul Mujahideen militant Burhan Wani. There were protests in her village of Sedow. She had opened the window of her home to see what was happening outside when hundreds of pellets hit her face, blinding her and fracturing her face and skull.

Her story became a rallying point for demands for a ban on pellets in Kashmir. Insha was treated at AIIMS and Aditya Jyot Eye Hospital, Mumbai, in efforts to restore her sight.

Veena Pandita, chairperson of the J&K Board of Secondary Education, said she had initially enrolled for all five compulsory subjects for Class X.

However, after her surgeries, “she switched subjects as special category students are allowed to, and she opted for music. This change was not updated with the computing agency, that is why her grades show her failing math, when she has not appeared for that exam.”

The chairperson said Insha’s grades will be updated on the website by Wednesday.

Sleaze CD row: What made them come after me… I guess (because) I was working with Congress, says Vinod Verma