The senior BJP leader Ravi Shankar Prasad said the People’s Alliance for Gupkar Declaration, which is contesting the local body elections, has now been joined by the Congress. The Gupkar alliance has declared restoration of Article 370 provisions as its agenda, he said. 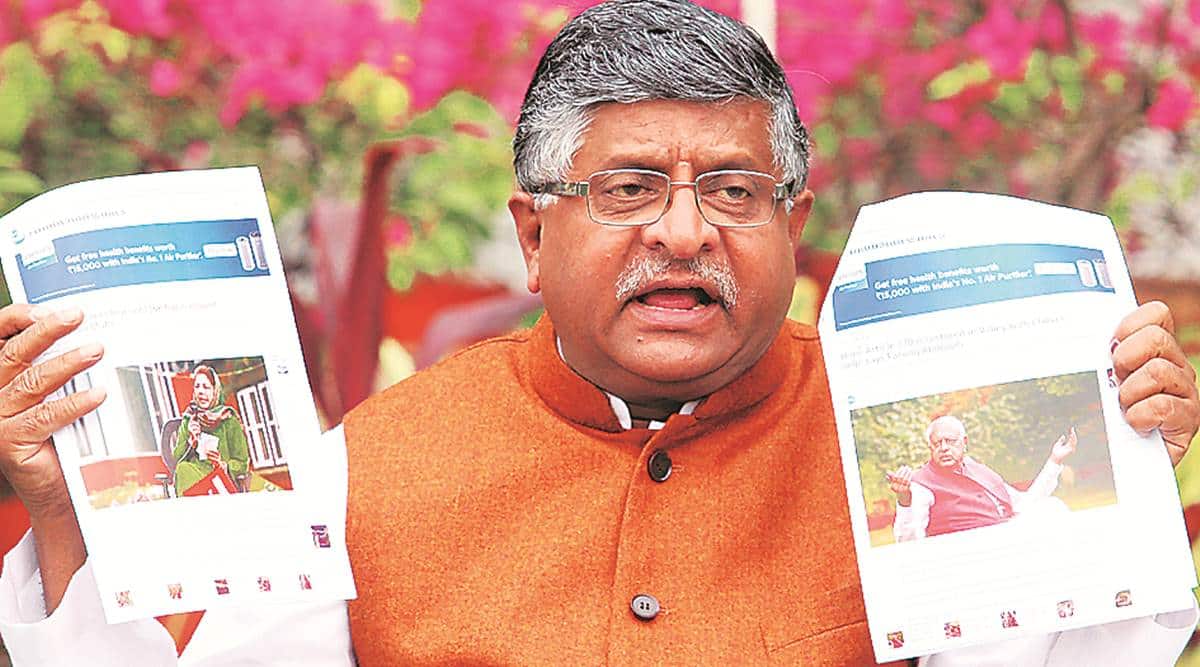 Union Minister Ravi Shankar Prasad during a press conference at his residence on Monday. (Express photo by Prem Nath Pandey )

The ruling BJP on Monday slammed the Congress for joining the Gupkar alliance ahead of the District Development Council (DDC) elections in Jammu and Kashmir and asked if the Opposition party wants the restoration of Article 370.

Addressing the media, Union Minister Ravi Shankar Prasad also asked Congress president Sonia Gandhi and former party chief Rahul Gandhi if they would back the remarks made by National Conference leader Farooq Abdullah, who, Prasad said, was open to taking China’s help to restore Article 370 provisions and PDP leader Mehbooba Mufti, who said she would not hoist the tricolour till the flag of Jammu and Kashmir is restored.

Prasad said various laws for the poor and the weaker sections are now applicable in Jammu and Kashmir after its special status was revoked.

The senior BJP leader said the People’s Alliance for Gupkar Declaration, which is contesting the local body elections, has now been joined by the Congress. The Gupkar alliance has declared restoration of Article 370 provisions as its agenda, he said.

“Farooq Abdullah has no compunction in seeking the support of China for the restoration of Article 370… Mehbooba Mufti said she won’t hoist the tricolour unless the J&K flag is restored,” Prasad said.

“We applied Central laws to Union Territories of Jammu and Kashmir and Ladakh… They do not want certain laws, including the Prevention of Corruption Act, in Jammu and Kashmir so that they can continue with corruption. People who have been Chief Ministers are saying that they will take the help of China for the restoration of Article 370. It is an anti-national activity,” he said.

Prasad demanded that the Gandhis clarify if they backed the statements of Abdullah and Mufti. “Sonia Gandhi ji and Rahul Gandhi ji, tell the nation clearly and categorically, does the Congress party want the restoration of Article 370 in the original form?… Does Congress support the statements of Farooq Abdullah and Mehbooba Mufti? Congress should tell if they are with the stated objective of the Gupkar Declaration,” Prasad said.

The District Development Council (DDC) elections in Jammu and Kashmir, now a Union Territory, are to be conducted in eight phases between November 28 and December 19, and the counting will take place on December 22.

Mainstream parties, including the National Conference, PDP, Peoples Conference and CPM, formed the Gupkar alliance last month and are fighting the maiden DDC elections together. Last week, the Congress formally joined the deliberations on seat-sharing within the alliance.