Bharat Bandh Highlights: The Congress, which has called for a Bharat Bandh today over rising fuel prices and depreciation of the rupee, has appealed to party workers to maintain peace and not to associate with any violent protests.

A policeman tries to douse a burning tyres during ‘Bharat Bandh’ protest called by Congress and other parties. (PTI Photo)

Launching an attack on the NDA government, Congress chief Rahul Gandhi on Monday questioned Prime Minister Modi’s silence over the rising fuel prices. “PM Modi has failed to deliver on the promises made to the country. The Rupee value has never been this weak in the past 70 years,” he said, addressing the media during the Bharat Bandh protest in New Delhi. He also thanked the Opposition for extending their support to the shutdown against the rising fuel prices as well as the fall in the value of the Rupee.

The BJP, hit back at the Congress calling the bandh a “flop show,” saying the government had no control over the fuel price hike. BJP’s Ravi Shankar Prasad slammed the party for the “violent” protests taking across the country. ” It’s the essence of democracy that hospitals, ambulances, and medicine shops are allowed to function without any hindrance. But, with the death of 2-year-old in Bihar today, an environment of fear is being created,” he said.

Multiple parties including SP, BSP, TMC, DMK and RJD, as well as several chambers of commerce and traders’ bodies, have backed the Bharat bandh call. Five Left Front parties have given a separate call for bandh over the hike in fuel prices, the problem of farmers and unemployment issues.

Today’s Bharat Bandh has been successful across the country. Congress party has never held Bharat Bandh before, we don’t even believe in Bharat Bandh, but since the time Modi govt has come, there has been a situation that led to this. People willingly participated in Bharat Bandh against the govt & taught them a lesson. At least now, govt should reduce prices and mend its way. But they are not worried at all. So, we all need to save democracy. It is in danger: Ashok Gehlot, former Rajasthan CM 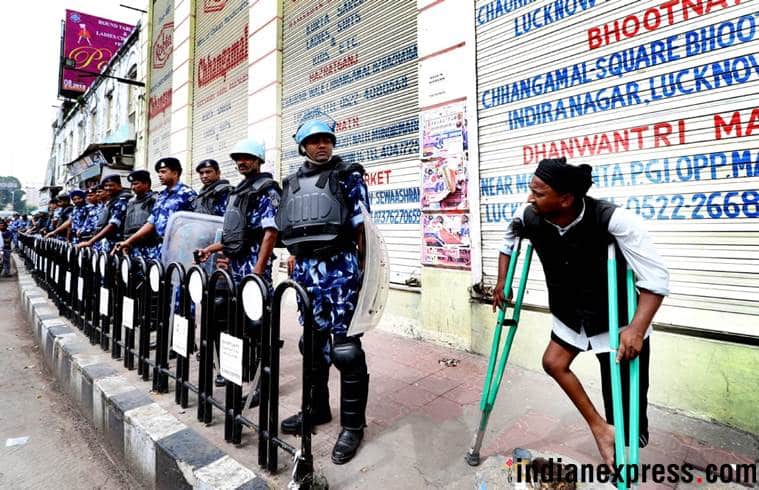 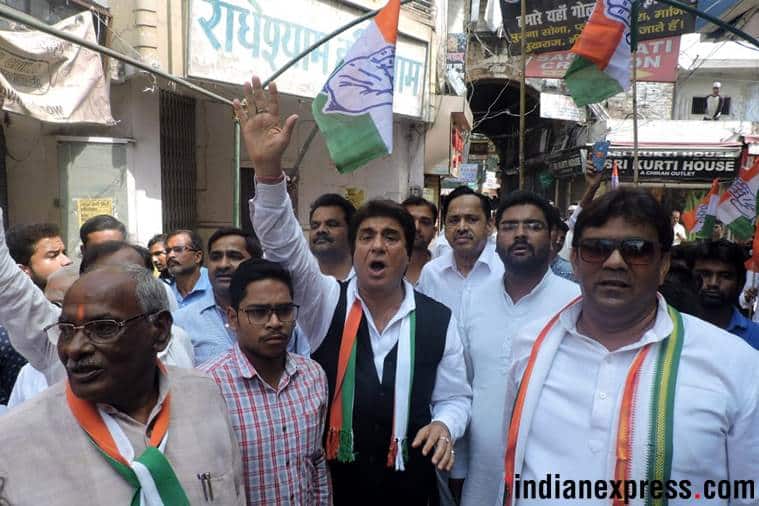 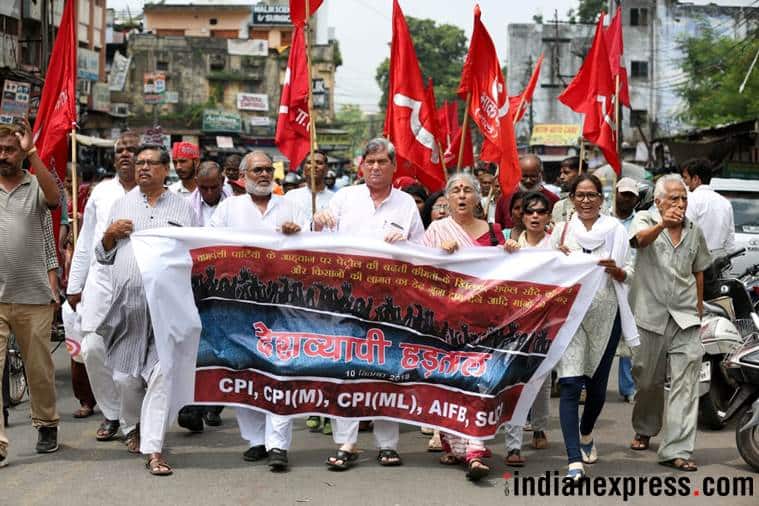 Congress state president Raj Babbar during the protest against the central government as part of Bharat band called against fuel price hikes in Lucknow on Monday. (Express photo by Vishal Srivastav)

Why was there a Bharat Bandh in the first place? If you listen to the 2012 speeches of those in power today, they were shouting about petrol&diesel prices. Today the prices are surpassing prices of that time, Rupee has weakened against Dollar. We are in trouble, Farooq Abdulla tells ANI. The protests on Jammu had been violent in some parts with protestors burning tyres.

Andhra Govt announces petrol, diesel prices to come down by Rs 2 a litre

Amid protests, Andhra Pradesh government on Monday announced a reduction of Rs 2 a litre in petrol and diesel prices. The new rates of petrol and diesel will come into effect from tomorrow morning, orders for the same will be issued later today. Earlier on Sunday, Rajasthan government had also announced a 4 per cent reduction in fuel prices, slashing petrol, diesel prices by Rs 2.5 a litre. 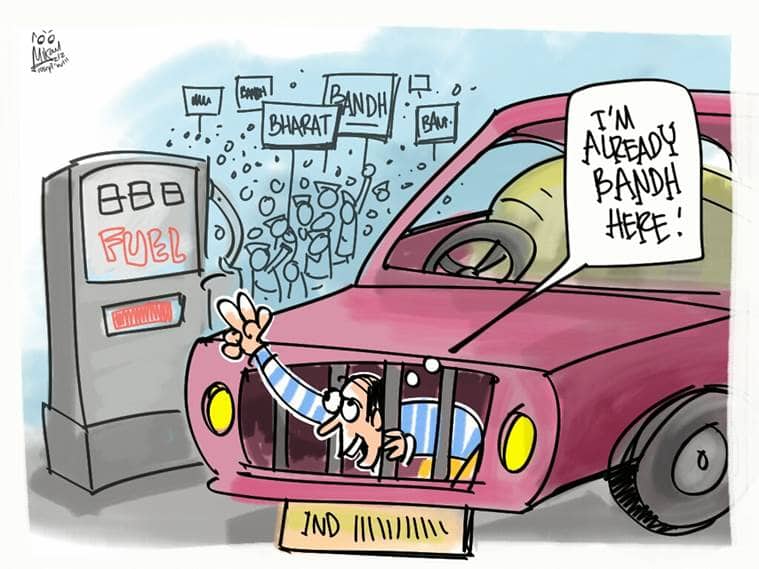 A new controversy is raking up over the death of a 2-year-old girl in Jehanabad of Bihar. The critically ill girl died on her way to a hospital as allegedly Bharat Bandh supporters blocked roads. According to IANS, Pramod Manjhi, the victim's father, said his daughter was suffering from diarrhoea and was advised to take her to a hospital in Jehanabad. However, Jehanabad Sub-Divisional Officer Paritosh Kumar refuted Manjhi's claims, saying: "The child was seriously ill and her father delayed her hospitalisation."

Attacking the Congress, senior BJP leader Ravishankar Prasad asked Congress president Rahul Gandhi who was responsible for the death of the child.

Madhya Pradesh Congress workers carried out rallies and protests outside petrol pumps which were open in the state as part of the Bandh. The party called it a success in the state while the ruling BJP accused the former of adopting "anarchic" ways to intimidate people to enforce the bandh. In Bhopal, a flower shop owned by Madhya Pradesh Chief Minister Shivraj Singh Chouhan's son Kartikey was at the centre of a protest by Congress workers.

Chimanganj Police Station in-charge Arvind Tomar said that protesters set aside barricades put up at petrol pumps but were driven away by police. The Congress claimed that the bandh got full support of the people of Jhabua. "We have got full support from the people. Shopkeepers kept their establishments closed so did petrol pump owners. Local MP Kantilal Bhuria led a rally with a bullock cart in the front," Jhabua district Congress president Nirmal Mehta was quoted as saying by PTI.

In Odisha, train services were disrupted in many places across the state as protestrers blocked railway tracks in many places including Bhubaneswar, Khurda Road, Puri, Berhampur, Sambalpur and Balasore to enforce the bandh from 6 am to 3 pm. At least 10 trains were cancelled in the jurisdiction of the East Coast Railway (ECoR) in view of the 'Bharat Bandh', an ECoR official said.

The protesters also locked the ticket counter of the famous Sun Temple in Konark. As a result, the temple was closed for tourists.

Several senior Congress leaders staged a sit-in at the Master Canteen Square near Congress Bhawan during the strike. Shops, markets, business establishments and educational institutions remained closed across the state during the 9-hour shut-down, while attendance was thin in offices. Commuters were stranded in many places as buses, taxis and autorickshaws stayed off the roads due to the bandh.

Describing the bandh as a "complete success", Odisha Pradesh Congress Committee (OPCC) president Niranjan Patnaik said people extended their spontaneous support to the strike as they are hit hard by the hike in the prices of petroleum products.

AICC general secretary Jarjum Ete alleged that the SP used abusive language against several Mahila Congress activists and a complaint would be lodged against him with the DGP. However, the SP denied the allegation saying that after repeated pleas from him the party resorted to pelting stones and created law and problem situation much before the bandh timing. 'Being a responsible party, such activities are not expected from the Congress,' the SP added.

Arunachal Pradesh Congress Committee president Takam Sanjoy claimed that the bandh is total and peaceful. All shops and business establishments including banks and educational institutions were closed in the state and private vehicles were off the road.

Reports suggested that a two-year-old allegedly died after the ambulance was stuck in the traffic caused by bandh. Union Minister Ravi Shankar Prasad also raised the issue in his press briefing, asking "Who is responsible for this death."

Meanwhile, ANI quoted Jehanabad SDO Paritosh Kumar saying that the death was not linked to the protests. "The death of the child is not related to bandh or traffic jam, the relatives had left late from their home," he said.

#Bihar: The death of the child is not related to bandh or traffic jam, the relatives had left late from their home: SDO Jehanabad Paritosh Kumar on reports that a 2-year-old patient died after the vehicle was stuck in #BharathBandh protests pic.twitter.com/mE8yQRuj2H

Who is resposible for the violence: Ravi Shankar Prasad on Bharat Bandh

Únion Minister Ravi Shankar Prasad is addressing a press conference in response to the Bharat bandh call by Congress. Slamming the Congress for violent attacks that took place earlier in the day, Rabi Shankar Prasad said, 'In democracy, everybody is welcomed to protest, but is violence acceptable? The Congress party should answer who is responsible for burning of buses, vandalising petrol pump. It’s the essence of democracy that hospitals, ambulances, and medicine shops are allowed to function without any hindrance. But, with the death of 2-year-old in Bihar today, an environment of fear is being created.""The people of India are not supporting the strike as they understand that the fuel price is operated by global market and is not in our control. We are trying our best to control the situation," he added

He also challenged former prime minister Manmohan Singh to a debate on economic affairs in Parliament.

Over 400 picketers were arrested in Tripura during the Bharat Bandh on Monday. Speaking to indianexpress.com, Pradesh Congress president Birajit Sinha said people have “spontaneously” supported ‘Bharat Bandh’ today in the state“People have expressed support to our bandh. Our reports from different districts suggest that they have spontaneously supported the agitation. Our supporters courted arrest at Dharmanagar in North Tripura, Camperbazaar and other parts of West Tripura and other districts. Ruling BJP and administration threatened them to abandon the agitation but we received tremendous support”, Sinha said.

Meanwhile, CPI (M) state secretary Bijan Dhar said his party and three other Left Front allies – CPI, All India Forward Bloc and Revolutionary Socialist Party (RSP) observed strike on the same day against alleged misrule of BJP-led NDA government. “Common people are going through a very hard time due to the devolution of Indian currency, rising fuel prices, inflation, attacks on Dalits and minorities among other issues. Our strike call protested against these. The bandh was total in Tripura”, Dhar said.

Most schools, colleges in the state had low attendance today as per reports. But the state secretariat and other government office had normal functioning. The Department of General Administration earlier issued a memo and instructed employees to maintain normal functioning on the day of the strike. The memo also summoned the attendance report of all employees by the noon. (Express photos by Debraj Deb) 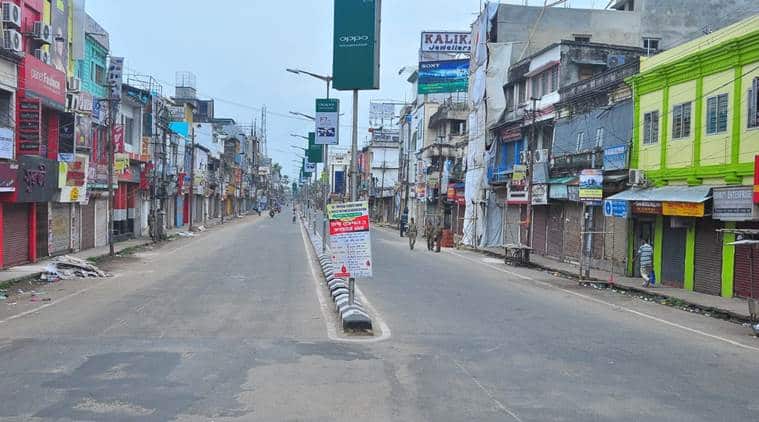 Voicing similar opinion as that of Manmohan Singh, Congress chief Rahul Gandhi thanked the Opposition for coming out in large numbers and supporting the cause. 'Together, all of us are going to defeat the BJP,' he declared.

Together, all of us are going to defeat the BJP: Congress President @RahulGandhi #BharatBandh #MehangiPadiModiSarkar pic.twitter.com/whO9sBPhAb

As of now,  at least 14 BEST buses have been vandalized in Mumbai's Vashi, Lalbaug and Parel till now. With protesters hitting the roads and pelting stones at the buses, Mumbai police has arrested few activists. Meanwhile, MNS workers also raised slogans as CM Fadnavis left Siddhivinayak Mandir.

Bharat Bandh Today LIVE: Left Front chairman Biman Bose has called for a 12-hour strike from 6 am to 6 pm on Monday across West Bengal.

The Congress has demanded an immediate reduction of central excise duty and excessive VAT in the states and bringing petrol and diesel under the ambit of GST. The Congress has claimed that SP, BSP, NCP, TMC, RLD, RJD, CPI, CPM, AIDUF, NC, JMM, JVM, DMK, AAP, TDP, Kerala Congress (M), RSP, IUML, Lok Tantric Janata Dal - S Yadav and Swabhiman Paksha - R Shetty have backed their Bharat Bandh call. Left Front chairman Biman Bose has called for a 12-hour strike from 6 am to 6 pm on Monday across West Bengal. Congress leader Ajay Maken has alleged that the BJP government kept on raising excise duty on fuel even as international crude oil prices have come down. "The government has collected Rs 11 crore as excise duty by burdening people and robbing them," he said. All you need to know about today's Bharat bandh.