Bharat Bandh: Other than banking, transport and other key services are also likely to be disrupted in many states due to the nationwide strike.

Protesters outside the University of Calcutta. (Express photo by Shashi Ghosh)

Bharat Bandh: Protesters on Wednesday hit the road across the country as trade unions called for a day-long strike as part of a Bharat bandh call. In West Bengal, incidents of violence and arson were reported from various parts and PTI reported that around 55 people have been arrested from Kolkata as trade union activists along with Left and Congress supporters picketed in support of the 24-hour general strike against the “anti-people” policies.

Multiple banking activities such as cash withdrawal and deposits have been affected at branches of various PSU banks. Most public sector banks had earlier informed their customers about the call for strike given by All India Bank Employees Association (AIBEA), All India Bank Officers’ Association (AIBOA), BEFI, INBEF, INBOC and the Bank Karmachari Sena Mahasangh (BKSM).

The nationwide strike by trade unions on Wednesday impacted the jute sector in West Bengal, as a number of mills remained shut, sources said.

Jute mill managements said only a handful of mills were operational in Hooghly, Barrackpore, Bhatpara and Naihati.

"Most of the jute mills did not open for the day and those that remained operational reported partial production," Indian Jute Mills Association Chairman Raghavendra Gupta said.

He told PTI that such strikes have an adverse impact on the jute sector, which is already grappling with a supply shortfall.

About 15 lakh power sector employees and engineers across the country went on strike on Wednesday in support of 'Bharat Bandh' call given by 10 central trade unions.

Power sector employees are protesting against the Centre's proposed amendments to the Electricity Act as well as other privatisation policies of the government, which they say are against the interest of the consumers and employees.

They are also demanding implementation of old pension scheme for all employees.

"About 1.5 million power sector employees and engineers, including 25,000 in UP, are on the boycott/strike which is a success," Chairman of All India Power Engineers Federation (AIPEF), Shailendra Dubey told PTI.

The day-long nationwide strike called by the central trade unions against the government's alleged anti-worker and anti-farmer policies evoked a mixed response in the Congress-ruled Chhattisgarh on Wednesday. Key sectors like banking and insurance witnessed partial impact on their functioning during the 'Bharat Bandh'. Several nationalised banks were closed as their employees joined the strike.

Banking operations hit in Rajasthan due to trade unions' strike

Banking and financial operations were affected in Rajasthan where thousands of employees associated with trade unions participated in nationwide bandh on Wednesday. Roadways buses, autorickshaw services were partially affected, particularly in areas like Sikar, Ganganagar and Hanumangarh. However, the strike remained peaceful in the state.

A day-long nationwide strike call, given by the central trade unions against the government's "anti-people" policies, on Wednesday evoked partial response in Punjab and Haryana.

Protesters resorted to blocking roads and squatting on rails tracks at a few places and also took out processions against the Central government in support of their demands in Punjab, the police said.

With the state roadways employees joining the nationwide strike, buses remained off road at several places including Amritsar, Nawanshahr, Ludhiana, Roopnagar and Kapurthala in Punjab, causing inconvenience to passengers.

Coimbatore: Over 800 workers, including MPs arrested

Two MPs of Left parties were among 800 workers of eight trade unions who were arrested on Wednesday while attempting to stage a demonstration as part of the nationwide strike to protest the "anti-labour" policies of the BJP-led government at the Centre. The demonstration was led by CPI Lok Sabha MP, K Subbaryan, who is also Tamil Nadu AITUC president and CPI(M) MP, P R Natarajan. 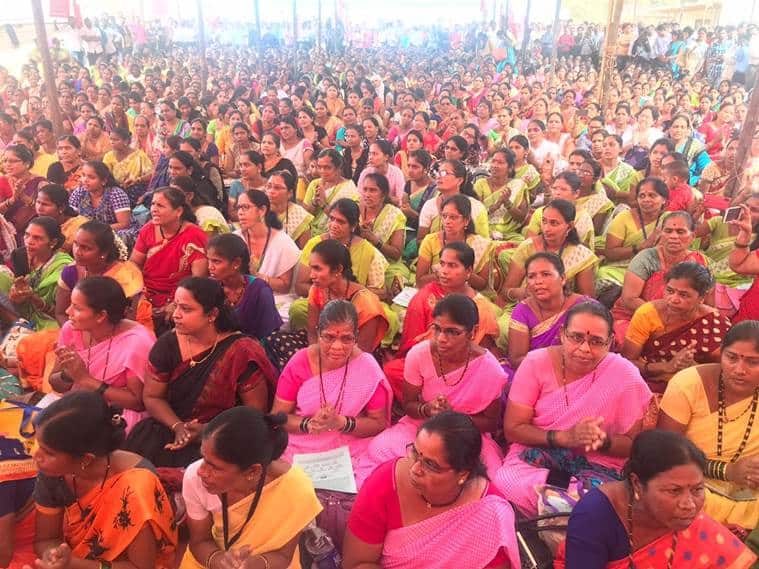 Tripura: 125 detained by police at Kailashahar in Unakoti district

A total of 125 people have been detained by police at Kailashahar in Unakoti district of Tripura. The detainees, from both CPIM and BJP, clashed among each other.

Barring banking services being hit, it was business as usual in Telangana on Wednesday despite the nationwide strike called by various trade unions protesting the Centre's 'anti-people' policies. Most of the shops and business establishments were open while transport services remained unaffected.

The strike by as many as three lakh employees and workers passed off peacefully with the participation of members of various trade unions in the state, senior leader of Telangana CPI, Sudhakar said. Representatives of various unions held dharna at Dharna Chowk near Indira Park.

Banking services were partially hit in Gujarat on Wednesday due to the nationwide strike called by 10 central trade unions to protest against the Central government's "anti-labour" policies. Transport services are absolutely normal across the state while offices of various business establishments also remained open. Although trade unions claimed that factory production was hit in many parts of Gujarat, industrialists said it was business as usual.

Production at Honda Motorcycle and Scooter India’s (HMSI) Manesar plant in Haryana and factories of various auto component manufacturers in Manesar-Bawal industrial belt was hit on Wednesday by the day-long strike called by 10 major trade unions against the Centre’s “anti-people” policies.

The strike, however, had no impact on production of auto majors Maruti Suzuki India, Hero MotoCorp and Honda Cars India at their plants in various parts of the country. READ MORE

No effect of strike in Mumbai, most of Maha; transport normal

The nationwide strike seems to have failed to evoke much response in Maharashtra till Wednesday afternoon with transport and banking services remaining largely unaffected in many districts as well as in the country's financial capital.No untoward incident was reported so far from any region of the state. Suburban trains, which are called as the "lifeline of Mumbai" with a ridership of more than 75 lakh commuters per day, public buses, taxis and autorickshaws are running normally in the island city and suburbs.

Similarly, Metro and Monorail services are running smoothly, officials said, adding that BEST-operated bus services are also running as per schedule. Private transport services like taxis and auto-rickshaws are also plying normally in Mumbai. Film and TV shoots also remained unaffected. The Federation of Western India Cine Employees (FWICE) said all its members were at work as usual and nothing was hampered because of the strike.

Incidents of violence and arson were reported from various parts of West Bengal with buses, a police vehicle and government properties being vandalised by strikers who tried to enforce the 24-hour bandh on Wednesday. Protesters blocked a major road in Sujapur area of Malda district, set tyres on fire, ransacked government buses and torched several vehicles, including a police van. When police tried to control the situation, they hurled stones and crude bombs. The police then baton-charged the mob, lobbed teargas shells and fired rubber bullets, officials said.

Till noon, around 55 people were arrested from different parts of the city for allegedly trying to block vehicles, stall government buses or forcibly stop shopkeepers from opening their establishments, a senior officer of the Kolkata Police said. (PTI)

Lashing out at the Left parties for calling Bharat bandh, West Bengal Chief Minister Mamata Banerjee on Wednesday said they are doing it for “cheap publicity”. “Bandhs called by them (Left parties) earlier were rejected. They want to get cheap publicity by calling bandh and hurling bombs on buses. Instead of gaining this publicity, political death is better,” she was quoted as saying by ANI. READ MORE

Sporadic incidents of violence were reported from various parts of West Bengal on Wednesday as trade union activists backed by Left and Congress members tried to enforce the 24-hour strike against the Centre's "anti people" policies. The strikers blocked rail and roads in several parts of the state affecting normal life. They burnt tyres and blocked roads in various parts of the East Burdwan district, besides staging sit-in on railway tracks, affecting train services in the sector.

In East Midnapore district, stones were hurled at buses. When police tried to remove protesters, a scuffle ensued, following which several strikers were arrested, the police said. (PTI) Cong, left leaders taken into custody for participating in general strike in AP

Leaders of the Congress, CPI and CPM were taken into custody as they staged a sit-in protest on the highway outside the RTC bus station in Vijayawada on Wednesday as part of the nationwide general strike called by various organisations. Rallies were taken out by the Left parties and trade unions in major towns and cities of Andhra Pradesh, opposing the policies being adopted by the Central government.

About 15 lakh power sector employees and engineers across the country went on strike on Wednesday in support of 'Bharat Bandh' call given by 10 central trade unions.  Power sector employees are protesting against the Centre's proposed amendments to the Electricity Act as well as other privatisation policies of the government, which they say are against the interest of the consumers and employees.

Banking services across Telangana were severely hit by the nationwide strike called by various trade unions protesting the central government's 'anti-people' policies on Wednesday. However, most of the shops and business establishments were open while transport services remained unaffected. The strike by as many as three lakh employees and workers was underway with the participation of members of various trade unions in the state, senior leader of Telangana CPI, Sudhakar said.

In Agartala, BJP supporters on motorcycles ply streets opposing the strike. They were seen encouraging shopkeepers to open shops in different parts of Agartala and other districts of Tripura since morning today. 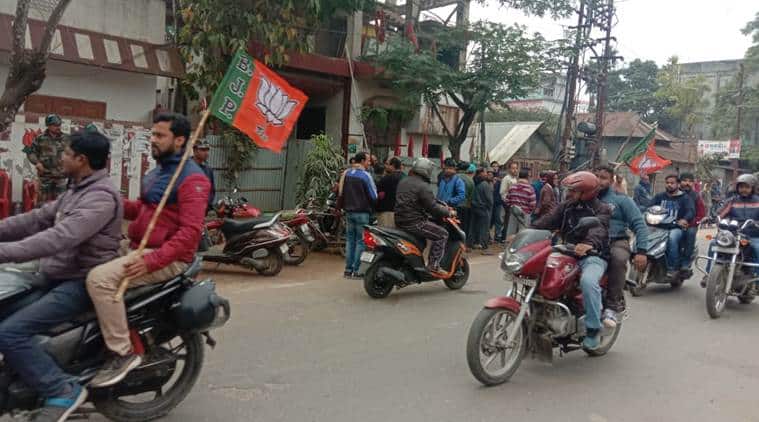 Other than banking, transport and other key services are also likely to be disrupted in many states due to this Bharat bandh call. (File photo)

Condemning the JNU violence and similar incidents in other universities, the trade unions expressed their solidarity with students and teachers all over India. The unions will also protest against privatisation in railways, corporatisation of 49 defence production units and forced merger of banks.

“We expect participation of not less than 25 crores of working people. The Ministry of Labour has failed to assure any of the demands of workers which called a meeting on January 2, 2020. The attitude of the government is that of contempt towards labour as we construe from its policies and actions,” the statement further said.

About 60 organisations of students and elected office-bearers of some universities have also decided to join the strike to protest against increased fee structure and commercialisation of education. Also, over 175 farmers and agricultural workers unions will extend its support to workers’ demands and observe January 8 as Gramin Bharat Bandh along with their charter of demands.