Bharat Bandh highlights: This protest has ‘no meaning’ but all have right to express, says Yogi Adityanath

Bharat Bandh highlights: Protesters in Madhya Pradesh and several other north Indian states called a bandh on September 6 in protest against the recent amendment of the SC/ST Act.

Shops shut down during a bandh call in Madhya Pradesh. (file photo)

General category and OBC members in Madhya Pradesh have called for a Bharat bandh in protest against the Parliament passing an amendment to the Scheduled Castes and Scheduled Tribes (Prevention of Atrocities) Act that overrode a Supreme Court order diluting it. READ MORE

Some of the upper-caste protesters have also been targeting elected representatives and raising slogans against the ruling BJP-led government at Centre for voting in favour of the amendment.  Over the past few days, the state has witnessed protests in districts like Morena, Bhind, Gwalior, Mandsaur and Neemuch, with upper-caste people — and at many places people belonging to Other Backward Classes — joining hands to gherao legislators, demanding that reservation be rolled back and the checks introduced by the apex court be re-introduced.

Section 144 of CrPc has been imposed in most parts of the state in view of the bandh call and 34 units of the special armed force of police have been deployed in various districts. Schools and petrol pumps will remain shut across districts and internet services are likely to be affected.

Upper-caste protesters have called on for a Bharat bandh over the recent amendment of the SC/ST Act. Follow highlights. Read in Malayalam

The call for a ‘Bharat Bandh’ by some upper caste and OBC groups against the recent amendment approved by Parliament to overturn a Supreme Court judgment on the Scheduled Caste/Scheduled Tribe (Prevention of Atrocities) Act witnessed a lukewarm response on Thursday. The protests were largely peaceful in most north Indian states despite some scattered incidents of violence being reported from Bihar and UP. READ MORE

Bharat Bandh fails to evoke much resposne in Punjab, Haryana

The call for 'Bharat Bandh' given by some upper-caste groups against the recent amendment approved by Parliament to overturn a Supreme Court judgment on the Scheduled Caste/Scheduled Tribe (Prevention of Atrocities) Act failed to evoke much response in Punjab while it fizzled out in neighbouring Haryana.

The maximum effect of the bandh was seen in Phagwara, which observed a complete day-long bandh, they said.

Upper-caste people made me the MLA and not Muslims and Dalits, says UP MLA on 'Bharat Bandh'

BJP MLA from Bairia, Surendra Singh, came out openly in support of the bandh. "Upper-caste people made me the MLA and not Muslims and Dalits. I am ready to sacrifice for the upper caste. If my upper-caste supporters ask me I can also resign (from my seat) for their sake," Singh was quoted as saying  by PTI.

Six policemen injured in UP during Bharat Bandh clashes

Six policemen were injured in Uttar Pradesh during a 'Bharat Bandh' called by some upper-caste groups, but life remained largely normal across the state. 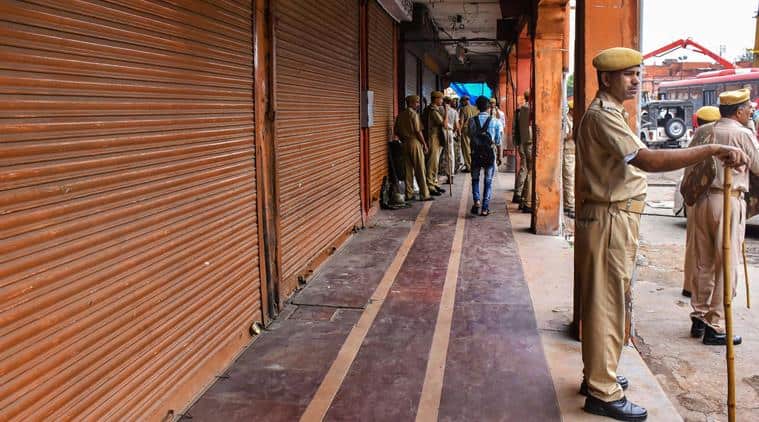 Police personnel guard outside closed shops during the Bharat Bandh, called by the upper-caste organisations in protest over the recent amendment of the SC/ST Act, in Jaipur, Thursday, September 6. (Source: PTI)

The call for 'Bharat Bandh' given by several groups against the amendments in the SC/ST Act evoked a good response in Rajasthan where many shops and business establishments, schools and other educational institutions remained closed on Thursday.

The police said no untoward incident has been reported in the state so far.

Shops were shut in Jaipur, Karauli, Pratapgarh, Udaipur, Pali, Nagaur and other districts. Schools too remained closed in view of the bandh.

Normal life hit in Bihar on account of Bharat Bandh

Normal life was hit in various parts of Bihar Thursday and train services were briefly affected in the state capital and Rajgir town on account of a 'Bharat Bandh' call given by some groups against the recent amendments in the SC/ST Act.

The bandh supporters, owing allegiance to several nondescript organisations, staged a demonstration in front of the BJP state headquarters at Birchand Patel Marg here raising slogans against the "betrayal by the very party we have been voting for". The gate of the premises remained locked from inside.

Some of them also headed towards the office of Chief Minister Nitish Kumar's JD(U), a BJP ally, just a few hundred metres away on the same road, but here also they the gates were closed.

Bharat Bandh call has 'no meaning' but all have right to express, says Yogi Adityanath

UP CM Yogi Adityanath has said that the Bharat Bandh called by some upper caste and OBC groupes in the country in protest against the parliament amendment over SC/ST Act has "no meaning". "It (Bharat Bandh call) has no meaning. People have their feelings. In a democracy everyone has the right to express themselves," Uttar Pradesh Chief Minister Yogi Adityanath told news agency PTI.

Defending the provisions of the Act, Adityanath said his government will ensure that the law is not misused.

"The BJP government is committed towards the welfare of people and development. We never play politics of caste and religion. The law is to protect the downtrodden. The government will ensure that it will not be misused," he told mediapersons in Gonda where he had gone to visit flood-hit areas.

Most private schools and petrol pumps in Madhya Pradesh remained closed Thursday, while markets and business establishments in parts of the state were shut in view of a 'Bharat Bandh' call given by some groups against the amendments in the SC/ST Act.Police said the bandh has been observed in a peaceful manner with no reports of violence or clashes so far. READ MORE 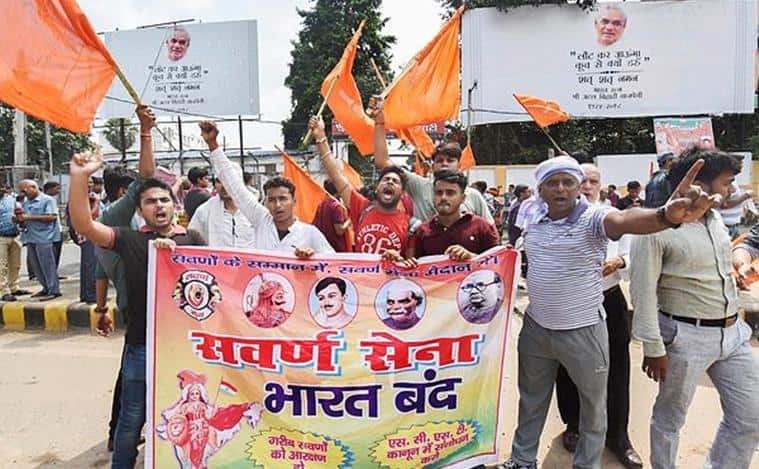 Catch up: From SC judgment to its opposition

Post-Supreme Court judgment on diluting the SC/ST Act, Dalits across the country were outraged and protested. The protests on April 2, claimed around seven lives and following the massive protest, the Centre filed a review petition against the SC/ST verdict. The daily life came to a halt as Dalit protesters blocked trains, set ablaze vehicles and clashed with police.

The Dalit and Opposition had strong reactions to the judgment which aimed to protect 'honest' public servants from being blackmailed with false cases under the Act.

In the midst of the MP bandh, a tribal group has said that it would contest the year-end assembly elections in order to form a tribal government.

Jai Adivasi Yuva Shakti (JAYS) claimed it has around 15 lakhs members in 10 states.

"We are uniting the tribal populations in 10 states where scheduled areas have been declared under the Fifth Schedule of the Constitution," a Hiralal Alawa, founder of JAYS said.

Alawa raised a number of issues like death of children due to malnutrition, displacement of tribals, lack of electricity and drinking water in tribal villages, access to education and healthcare, no employment in the tribal sector.

What amendments were brought to SC/ST Act?

On August 9, Rajya Sabha unanimously passed the amendments to the SC/ST Act brought by the ruling government in the monsoon session of Parliament.

Petrol pumps in Bhopal closed from 10am to 4pm today 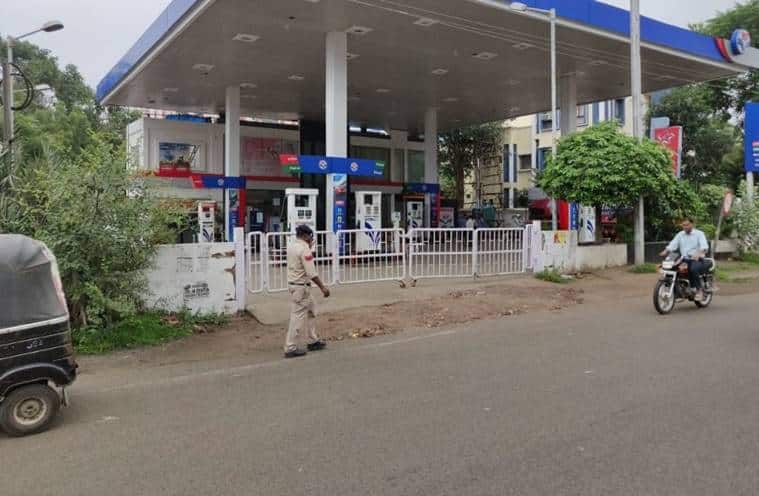 Shops are shut in Lucknow and Kota

Shops in Lucknow closed due to nation-wide bandh called against amendment to SC/ST (Prevention of Atrocities) Act. #BharatBandh pic.twitter.com/MXAeH767iD

#Rajasthan: Shops in Kota closed in view of #BharatBandh called by various organisations against the SC/ST (Prevention of Atrocities) Act amendment. pic.twitter.com/YxrYrQH2eq

Drones in place for surveillance in Gwalior

Drones are being used for surveillance in Gwalior. SDM Narottam Bhargavi says,“Lot of security forces deployed. We are fully ready to face any kind of situation. Section 144 imposed at several places. It is very peaceful at present.”

#BharatBandh protests: Drones are being used for surveillance in Gwalior. SDM Narottam Bhargavi says,“Lot of security forces deployed. We are fully ready to face any kind of situation. Section 144 imposed at several places. It is very peaceful at present.” #MadhyaPradesh pic.twitter.com/hyRumwYAha

Rajasthan: Shops in Ajmer closed in the view of #BharatBandh called by various organisations against amendments in SC/ST Act. pic.twitter.com/vnUxAaNhrS

Section 144 of CrPc has been imposed in most parts of the state in view of the bandh call and 34 units of the special armed force of police have been deployed in various districts. (file photo)

In its March 20 judgment, the Supreme Court had ordered certain safeguards against arrest under the SC/ST Act, which led various Dalit groups to call for a Bharat Bandh. The government, however, introduced an amendment to the Act in Parliament that rules out any provision for anticipatory bail for a person accused of atrocities against SC/STs, notwithstanding any court order. The legislation also provides that no preliminary inquiry will be required for registering a criminal case and an arrest under this law would not be subject to any approval.