‘Territory under Pak control’ refers to PoK; ‘proxies’ to terror groups in polls 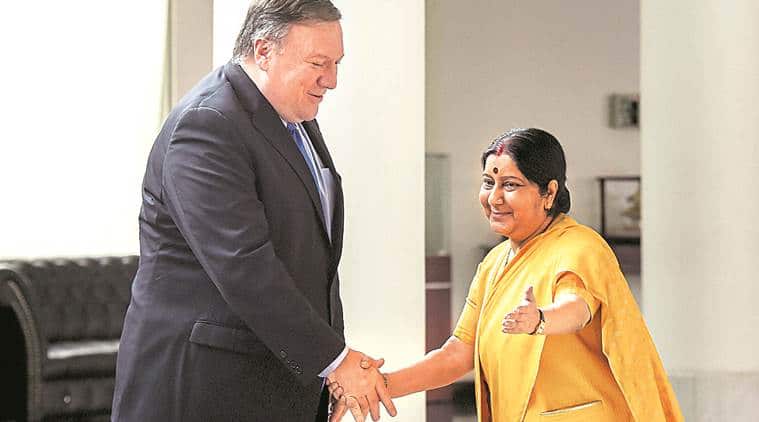 Almost two years after the Uri attack that was mounted from Pakistan-occupied Kashmir and the retaliatory surgical strikes against terrorist pads in PoK, the US signed off on using New Delhi’s language and used “territory under Pakistan’s control”, and not Pakistan’s “territory” — to describe Pakistan-occupied Kashmir. They also slammed the use of “terrorist proxies”, a description for extremist political groups used by Pakistan’s army in the region.

The Indian side also used the term “retribution” for the first time when it came to justice for those behind the Mumbai terror attack in 2008. But, the US stuck to the standard formulation of “to expeditiously bring the perpetrators to justice”, and did not mention retribution — a key theme for the Indian side after the 2016 surgical strikes.

Sources said that this “diplomatic formulation” in the joint statement Thursday — agreed at the first-ever Indo-US 2+2 bilateral dialogue — is “new” and “significant”.

“This shows their acknowledgement that PoK is not Pakistan’s territory and it’s under its control. A lot of negotiations went in to get this language change in the joint statement,” a source said.

The joint statement issued after External Affairs Minister Sushma Swaraj and Defence Minister Nirmala Sitharaman met US Secretary of State Michael R Pompeo and US Defence Secretary James Mattis said that the Ministers denounced any use of “terrorist proxies” in the region, and in this context, called on Pakistan to ensure that the “territory under its control” is not used to launch terrorist attacks on other countries.

Incidentally, when Prime Minister Narendra Modi met US President Donald Trump in Washington DC in June 2017, the joint statement had said, “The leaders called on Pakistan to ensure that its territory is not used to launch terrorist attacks on other countries.”

While India has long maintained that Pakistan Army uses “proxies” to mount terrorist attacks in India, their visibility has increased in the recent Pakistan elections where UN-proscribed terrorist organisation Jamaat-ud-Dawa contested as a political outfit. Its founder Hafiz Saeed, who is the mastermind of the 26/11 Mumbai terrorist attack and who faces a $10 million bounty, campaigned as well.

“During negotiations with US officials, the Indian side was able to convey the urgency to name and shame these outfits which are being mainstreamed by the Pakistan’s establishment,” the source said.

He is learnt to have conveyed to Pakistan’s leadership that Washington needs to see “action on the ground”. The Indian sense was that the US Secretary of State and his delegation did not come away with much satisfaction. “There was a sense of realism (in the US side)”, a source, who was part of the 2+2 talks, said.

The Indian side also used the term “retribution” for the first time, when it came to justice for those behind the Mumbai terror attack in 2008.

In the presence of Pompeo, Swaraj said, “On the 10th anniversary of the 26/11 attacks, we recognize the importance of justice and retribution for the masterminds behind this terrorist attack.”

Mattis also recalled the Mumbai attacks and recognized that “both our nations have endured the effects of senseless terrorist attacks like those 10 years ago in Mumbai, which killed innocents from more than a dozen nations. We remember those lives lost as we approach the 10th anniversary of attacks this November.”