Banerjee blamed "unprecedented release of water from the Damodar Valley Corporation (DVC) dams — Panchet, Maithon and Tenughat" --- for the flood situation and sought the PM’s intervention in drafting a plan to upgrade dams in the region. 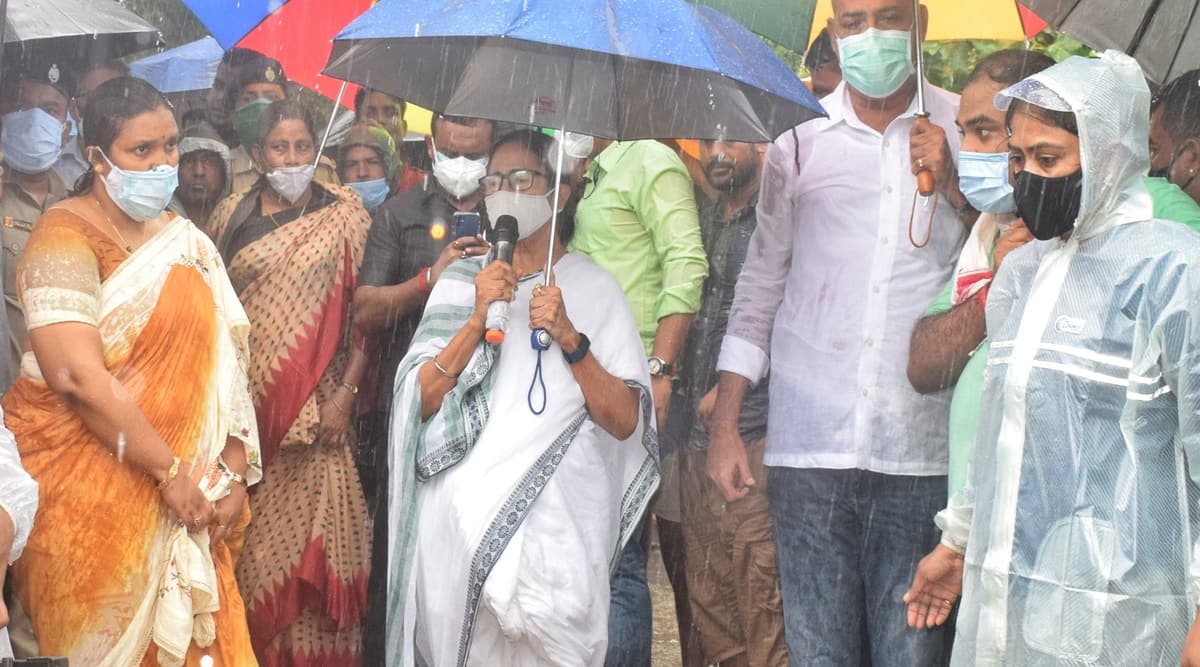 WEST BENGAL Chief Minister Mamata Banerjee, after visiting flood-hit areas in the state on Wednesday, wrote to Prime Minister Narendra Modi describing the floods as “man-made”. Banerjee blamed “unprecedented release of water from the Damodar Valley Corporation (DVC) dams —Panchet, Maithon and Tenughat” — for the flood situation and sought the PM’s intervention in drafting a plan to upgrade dams in the region.

The DVC, however, denied the CM’s allegations, saying that it discharges water after taking consent of the state government and blaming it for the deluge was not justified.

Meanwhile, Prime Minister Narendra Modi spoke to Banerjee over the phone and assured the CM all possible support from the Centre to help mitigate the situation.

A tweet posted by the Prime Minister’s Office (PMO) later in the day said, “PM @narendramodi spoke to WB CM @MamataOfficial on the flood situation caused by water discharge from dams in parts of the state. PM assured all possible support from the Centre to help mitigate the situation. PM Modi prays for the safety and wellbeing of those in affected areas.”

In her letter, Banerjee wrote, “As you [PM Modi] are aware, West Bengal is located in the eastern part of the country and a complex river system flows through the state before it enters the Bay of Bengal. Catchment areas of many of the rivers are located in adjoining states such as Jharkhand and Bihar. Damodar and Barakar river systems, which flow into West Bengal, are fed from a huge catchment area (more than 10000 sq km) located in Jharkhand. Even moderate rainfall generates huge inflow in the dams.”

She added, “Recently, there has been a low-pressure formation resulting in high rainfall in West Bengal and Jharkhand. Nearly two lakh cusecs of water was discharged from Panchet, Maithon and Tenughat dams of DVC leading to severe flooding of huge areas in Hooghly, Howrah, Purba Bardhaman, Paschim Bardhaman, Birbhum and Paschim Medinipur districts.”

Banerjee also said, “Heavy release from DVC dams has led to man-made floods in Bengal year after year. After 2015, the state faced critical flood situation in 2017, 2019 and now in 2021. Despite flagging the issue to you and DVC way back in 2015, highlighting the urgent need for renovation, upgrade and modernisation of assets of DVC and other allied systems, inter alia, essential desiltation and dredging, to prevent the recurrent wrath of floods in West Bengal and most importantly increasing water-holding capacity of the DVC dam by around 1.2 lakh acre-ft, the issue remains unaddressed.”

Banerjee also claimed in her letter that the state did not get sufficient financial help from the Centre in tackling natural disasters. She wrote, “Despite the state being regularly ravaged by natural disasters in the form off cyclones and man-made floods, which we are presently witnessing, no financial help has been forthcoming from the Centre. The state has to cope with compensating for the loss of lives and property from our meagre resources.”

She wrote, “In respect of the present flood, we will shortly be sending our damage assessment for your kind intervention. I would reiterate the need to develop holistic and long-term solutions in respect of augmentation of storage capacity of the DVC system to ensure that West Bengal is spared the regular devastation and suffering from man-made floods perpetrated by huge releases from the DVC dams.”

Banerjee had earlier planned to take stock of the flood situation through an aerial survey and then convene an administrative meeting in Khanakul of Hooghly district. However, due to inclement weather, she cancelled the aerial survey plan and instead went to flood-hit areas such as Udaynarayanpur and Amta of Howrah district by road. At some places, Chief Minister stepped out of her car and spoke with the affected people, standing in knee-deep water.

After her visit, the CM directed her administration to send a report to the PMO on the flood situation and the damage caused.

According to the state administration, at least 15 people have died and three lakh were displaced after heavy rain in the past few days and subsequent discharge of water from DVC dams inundated large parts of Purba and Paschim Bardwan, Paschim Medinipur, Hooghly, Howrah and South 24 Parganas districts.

Addressing affected people in Amta of Howrah, Banerjee claimed, “I have told the Prime Minister that the DVC is responsible for the floods in Bengal. The DVC is not conducting dredging of its dams which is causing an overflow following the release of water, leading to floods. The DVC should stop such arbitrary release of water.”

The DVC, however, informed the state government that, due to heavy rain, storage capacity of Maithoon and Panchet dams have reached their maximum level and thus discharge of water was unavoidable. The DVC has released 5.43 lakh cusecs of water from July 31 till Tuesday evening, an official of the corporation said.

The DVC also said it does not decide about water regulation and decisions on this are taken by the Damodar Valley Reservoir Regulation Committee (DVRRC) of which the state’s irrigation secretary is a member.

The DVC only implements the decision of the committee on water regulations. The state government’s consent is taken before the discharge of water and the DVC issues warning to district administrations. So blaming DVC for the flood is unjustified,” DVC executive director (Maithon) S Banerjee told news agency PTI.

The DVC official said that the DVRRC tries to restrict water release to the maximum possible but further regulation will put the dams in danger.

Explained: The Israeli court verdict on Sheikh Jarrah, and why Palestinians are unhappy about it