According to the source, the Eastern Command was told “you take measures first to augment your defensive capability, and then be ready to go launch (an offensive) to relieve pressure in the area of Ladakh”. 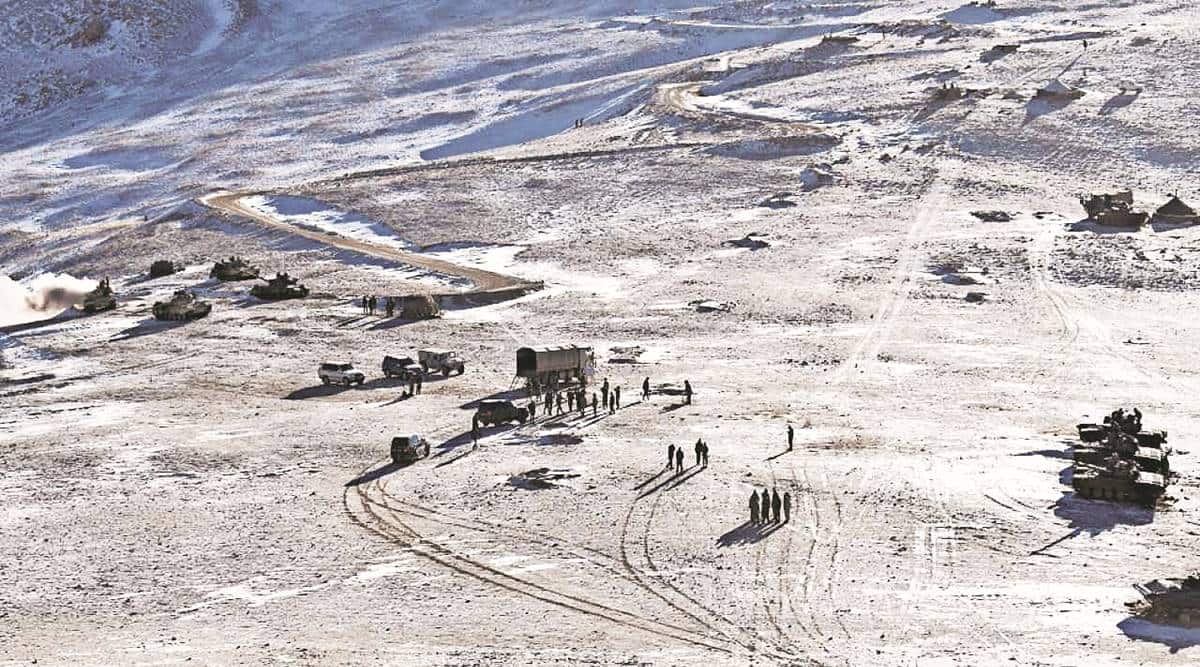 Tanks pulling back from Pangong region in February. (File)

Before Indian troops occupied strategic heights in the Kailash range in eastern Ladakh in August last year to turn the tables on the Chinese, one of the options considered by the Army brass was a build-up, and a counter-thrust if need be, in the Eastern Sector to “relieve pressure in the area of Ladakh”.

The Kailash range operation, which put the Chinese at a disadvantage for the first time since the start of the standoff along the Line of Actual Control in May last year, led to the disengagement of troops and armoured columns on the north and south banks of Pangong Tso and the Kailash range this February.

A top source, who was involved in military decision-making, told The Indian Express: “We were trying to keep this entire conflict situation localised to the Ladakh sector. It was not in our interest to escalate it and take it to other sectors also. Because we had to see what our capabilities are, what the connectivity issues are, what force levels are available. That was our thinking.”

Explained |Where are Hot Springs and Gogra Post? What are their strategic significance?

Yet “we wanted to be ready in other sectors also, so that we are able to dissuade them”. For this, in the Middle Sector “where we were weak, we pushed in more troops,” the source said. The Sino-Indian boundary has three sectors – Western (Ladakh), Middle and Eastern.

According to the source, the Eastern Command was told “you take measures first to augment your defensive capability, and then be ready to go launch (an offensive) to relieve pressure in the area of Ladakh”.

“Our intention was to keep it localised to Ladakh.” Within eastern Ladakh, the source said, the Chumar area was also considered a possibility, but there had been transgressions there earlier and “we did not want to go to an area where we had been at a disadvantage”.

Plans on how to counter the Chinese began to be discussed soon after the start of the standoff. “Our basic philosophy of dealing with Chinese incursions is that you contain that incursion, wherever they come in. You block whatever directions they can expand. And then be ready to do what we call a QPQ (quid pro quo) Operation,” the source said.

Such an operation, the source said, can be closer to where the Chinese have come in, or it can be in a different area, but it has to be “tactically viable, which you can hold on to, sustain”.

Read |India will not be pushed, stood firm against China, says CDS Rawat

Keeping this in mind, additional forces were brought in. Their induction took time since they had to be acclimatised.

“It was happening since the beginning,” much before the violent clash in Galwan Valley on June 15 in which 20 Indian troops lost their lives while China admitted, belatedly, to loss of four PLA personnel.

“Because they (Chinese) had come in at multiple locations,” the source said, there was constant dialogue between Army Headquarters and the Northern Command.

The Army HQ, the source said, was given presentations on possible locations, but “the decision is at the command and lower level” once there is a go-ahead from the top since “we cannot dictate, sitting in Delhi, which position will be more advantageous… some build-up was also being seen across the Kailash range”.

The Army’s deployment in the region was reorganised “for better command and control… basically, with the aim that you have separate forces to undertake this offensive operation”.

The QPQ, the source said, could have happened “much before” August, but got delayed.

The China Study Group, the apex body on China-related decisions, was “enlarged” once the crisis began, the source said. The broad approach on engagement, including the Corps Commander going for talks, is decided at the CSG level,” the source said, adding that the Corps Commander is informed of the “inviolable terms of reference”. The CSG made it clear that India’s position is status quo ante — of troops on either side relocating to April 2020 positions.

Advertisement
Don't Miss |What is the new disengagement agreement in eastern Ladakh?

On the Galwan Valley incident, the source said the Chinese had built what they called a “monitoring outpost” near Patrolling Point (PP) 14 in Galwan Valley and the lower level commanders had agreed that it would be removed.

“Then a patrol went to remove that, and that is when the initial altercation started. They were prepared,” the source said. The Chinese troops “were very sure that no firing will take place” since troops are not supposed to use firepower under the different protocols even though they were carrying guns.

“They felt that we would not be able to break out of this mould. Therefore, they came prepared with riot gear, medieval weapons, spikes and wires rolled around sticks. They wanted to take advantage of that,” the source said.

Immediately after the incident, the Army “revised our Rules of Engagement with them, and the CSG was briefed that these are the new orders passed to the formations”.

According to the source, the earlier practice was to tell troops to “avoid firing, present a human wall and don’t allow them to transgress beyond our perception of the LAC”. But after Galwan, “we said no, this is not working”.

Under the new rules, the source said, the direction is that “if they don’t listen to you, you withdraw to a tactically viable position, take positions, tell them that if you do not stop, we will be forced to fire”.

Towards the end of August, the “decision to occupy heights of the Kailash range was taken by the CSG and the Prime Minister was informed,” the source said. The final decision was taken on August 29 and “the same evening, troops started moving”.

The Kailash range positions allowed India to dominate not only the strategic Spanggur Gap, which can be used to launch an offensive as the Chinese had done in 1962, but also the PLA’s Moldo Garrison.

“Tactically, it was disadvantageous to them. Then they got serious,” the source said.

During this repositioning, warning shots were fired for the first time between India and China. “Although they were only warning shots, both small arms as well as rocket launchers were fired. They were totally taken aback,” the source said.

“Immediately after the August operation, they (Chinese) showed intent to disengage” at the discussions between the military commanders. “They said the situation is very serious and fighting can break out any time,” the source said.

General Zhao Zongqi, PLA’s Western Theatre Commander at that time, had “started something which did not pan out the way they had visualised or planned” and “there was no possible or favourable exit strategy” for him, the source said.

But a new commander, General Zhang Xudong, replaced Zhao in December, and events moved towards discussions. The new commander, the source said, “actually indicated that they want to move ahead”. Following talks in January, India and China moved in February to disengage in Pangong Tso and the Kailash range.

On the possible loss of leverage by giving up Kailash range positions, the source said “these are tactical considerations that cannot dictate your strategy… Overall, the politico-military interface is very important in this, what do you want to achieve. Are you going to continue staying there, eyeball-to-eyeball? Are you going to move up now, all along the border and mobilise?… What we did in eastern Ladakh, we could not have replicated that all along”.