Though a resident of Bongaon in West Bengal, located at the international border of India and Bangladesh, Sujan Poddar travelled all the way to Kolkata to be a part of Bandhan Express’ first journey. 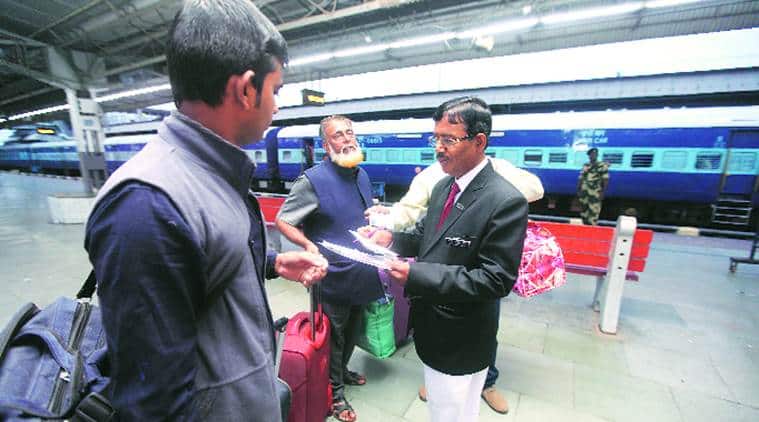 Passengers get their tickets checked before boarding the Bandhan Express at Kolkata railway station on Thursday. Subham Dutta

THE NEWLY-INAUGURATED Bandhan Express began its first commercial run between Kolkata and Khulna from Kolkata railway station at Chitpur on Thursday morning. This is the first train to connect Kolkata and Khulna after Barisal Express was stopped owing to the India-Pakistan war in 1965. Prime Minister Narendra Modi, Bangladesh PM Sheikh Hasina and Chief Minister Mamata Banerjee, on November 9, had jointly flagged off the train through a video conference.

Though the train has a capacity to accommodate 456 passengers, only 53 made the journey on Thursday. One of them was Hazi Ramjan Ali, a resident of Ekbalpore in Kolkata, who frequently visits Bangladesh for business purposes. This time he was going to Khulna to attend the wedding of a relative.

“Earlier, I used to take the bus, which usually takes around six hours to reach Khulna. The train will take about five hours. The ticket fare is also cheaper,” Ali said. While AC Chair Car tickets in the bus cost Rs 800, the same had been priced at Rs 670 in Bandhan Express.

Elderly couple Bidhan and Sabita Poddar, residents of Khulna, also took the train on Thursday. “It is a historic moment for us… The train is making its first commercial run and we are happy to be a part of it,” Bidhan Poddar said. He had taken the bus to visit his elder brother in Kolkata.

Mohammad Russel Mahmud (38), a resident of Barisal, Bangladesh, was seen posing for a selfie with co-passengers. “I am very excited, as the train is making its first commercial run. This is the second time I visited Kolkata. I used to travel by bus. Now, I might consider taking the train,” said the tourist.

Though a resident of Bongaon in West Bengal, located at the international border of India and Bangladesh, Sujan Poddar travelled all the way to Kolkata to be a part of Bandhan Express’ first journey. “I could have made the journey from the Petrapole-Benapole border. But I chose to travel by this train. This is the first time that I will travel to Bangladesh by a train,” said the 44-year-old who travels to Bangladesh frequently for business purposes.

The passengers expressed happiness with the immigration and customs facilities at the Kolkata station, which had also been inaugurated along with the new train on November 9. The same facilities will be provided to the already existing Kolkata-Dhaka Maitree Express, which makes it journey from the same station and runs six days a week from each side.

The total seating capacity of Bandhan Express is 456 — 312 in A/C chair car and the rest in A/C first class. The train will depart every Thursday from Kolkata at 7.10 am and arrive in Khulna at 12.30 pm.