Bail pleas of journalist, another: SC says why not go to HC

Senior advocate Kapil Sibal, representing the journalists' union, argued that the Supreme Court has intervened in similar cases in the past where Article 32 had been invoked. 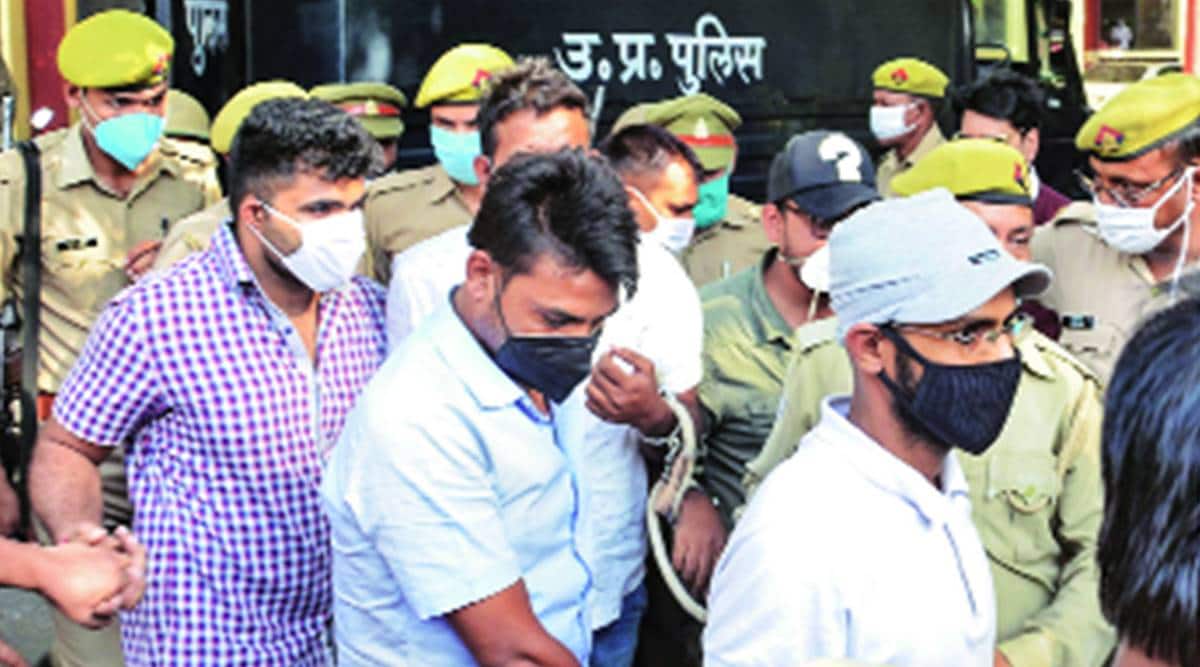 Siddique Kappan (with cap), secretary of the Kerala Union of Working Journalists, and three others who were held with him were produced before a court in Mathura. (PTI)

Observing that it is “trying to discourage” individuals from filing petitions under Article 32 of the Constitution — which grants individuals the right to approach the top court seeking enforcement of fundamental rights — a Supreme Court bench headed by Chief Justice of India S A Bobde sought responses from the Centre and the Uttar Pradesh government in a plea seeking the release of Kerala-based journalist Siddique Kappan.

“Why can’t you go to the high court?” the bench remarked while hearing a plea filed by the Kerala Union of Working Journalists challenging the journalist’s arrest.

The same bench referred a similar case invoking Article 32 — which involved Sameet Thakkar, a Nagpur resident who had challenged the multiple FIRs against him for alleged derogatory tweets against Maharashtra CM Uddhav Thackeray and his ministers — to the high court, observing that “even high courts can uphold fundamental rights”.

Kappan, 41, and three others were arrested while on their way to Hathras to report an alleged incident of gangrape and murder. UP Police have alleged that Kappan, 41, and two members of the Campus Front of India (CFI) were part of a “conspiracy” to inflame religious enmity over the Hathras rape, and booked them on various charges, including under the stringent UAPA and sedition.

Senior advocate Kapil Sibal, representing the journalists’ union, argued that the Supreme Court has intervened in similar cases in the past where Article 32 had been invoked.

“We are aware of our powers under Article 32,” CJI Bobde observed, issuing the notices and listing the case for hearing on November 20.

On November 11, while granting interim bail to Republic TV editor-in-chief Arnab Goswami, the Supreme Court had asked every high court to exercise its jurisdiction “to protect liberty… the ultimate reason for our existence as constitutional courts”.

The court granted bail to Goswami and two others who were arrested in an alleged abetment to suicide case, despite objections from the Maharashtra government, and held that the Bombay High Court had erred in rejecting the bail applications.

Similar powers to enforce the fundamental rights of citizens are also conferred on high courts under Article 226 of the Constitution. The two provisions are not mutually exclusive and allow a citizen to either approach the high court that has jurisdiction over the case or the Supreme Court.

Most recently, the Supreme Court transferred the case involving land use for the national capital’s Central Vista project to itself from the Delhi High Court. Incidentally, the petitioners had not sought such a transfer.

In 2018, the SC had transferred the case seeking probe into the death of judge B H Loya from the Bombay High Court to itself.

When such transfers are made, the petitioners lose a stage of appeal that would otherwise have been available had the high courts heard and decided the case.

On Monday, the CJI refused to hear Thakkar’s case even as the counsel for the Maharashtra government said the state would not object to granting of bail as the investigation was complete in the case.

Senior advocate Mahesh Jethmalani, appearing for the petitioner, argued that his client Thakker had been arrested despite the fact that all charged against him in the FIR were bailable offences.

“If your lordships are not shocked by this, nothing will shock you,” Jethmalani argued.

“We see such matters every day. We are immune to such shocks. Nothing will shock us now,” the CJI responded.