The Bench of Chief Justice of India Ranjan Gogoi, Justices S A Bobde, D Y Chandrachud, Ashok Bhushan and S A Nazeer overturned the September 30, 2010 judgment of the Allahabad High Court which had ordered three-way division of the disputed 2.77 acres between the Nirmohi Akhara sect, the deity Ramlalla Virajman and the UP Sunni Central Waqf Board. Bringing to an end a seven-decade legal battle over the title to the disputed Ram Janmabhoomi-Babri Masjid site in Ayodhya, an issue that roiled India and propelled the rise of the BJP, a five-judge Constitution Bench of the Supreme Court, in a unanimous verdict Saturday, ruled that the entire disputed land be handed over to a trust to be constituted for construction of a Ram temple and that Muslims, in the name of “equity”, be given five acres of either the acquired land near the site or at “a suitable prominent place in Ayodhya” for building a mosque.

Underlining that it had been “tasked with the resolution of a dispute whose origins are as old as the idea of India itself”, the Bench of Chief Justice of India Ranjan Gogoi, Justices S A Bobde, D Y Chandrachud, Ashok Bhushan and S A Nazeer overturned the September 30, 2010 judgment of the Allahabad High Court which had ordered three-way division of the disputed 2.77 acres between the Nirmohi Akhara sect, the deity Ramlalla Virajman and the UP Sunni Central Waqf Board.

While dismissing the Nirmohi Akhara suit as barred by limitation but upholding the suits of the UP Sunni Central Waqf Board — the High Court order had said the Board suit was barred by limitation — and Ramlalla Virajman, the Bench said the High Court order was “legally unsustainable” and “dividing the land will not subserve the interest of either of the parties or secure a lasting sense of peace and tranquillity”.

No Kashi, Mathura in near future: new Party-Parivar consensus

The Bench said “on the balance of probabilities, there is clear evidence to indicate that the worship by the Hindus in the outer courtyard” of the disputed site “continued unimpeded in spite of the setting up of a grill-brick wall in 1857. Their possession of the outer courtyard stands established together with the incidents attaching to their control over it”. 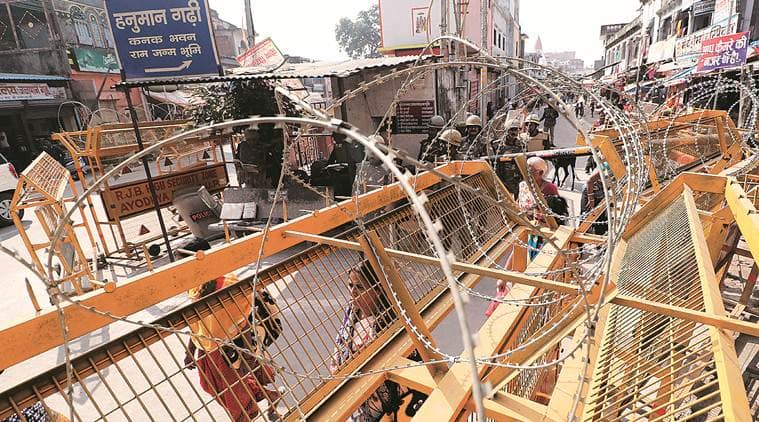 Tight security near the disputed site in Ayodhya on Saturday. (Express photo by Vishal Srivastav)

“As regards the inner courtyard, there is evidence on a preponderance of probabilities to establish worship by the Hindus prior to the annexation of Oudh by the British in 1857. The Muslims have offered no evidence to indicate that they were in exclusive possession of the inner structure prior to 1857 since the date of the construction in the sixteenth century.”

“The Hindus never accepted the division of the inner and the outer courtyard. For the Hindus, the entire complex as a whole was of religious significance. A demarcation by the British for the purposes of maintaining law and order did not obliterate their belief in the relevance of the ‘Garbh-Grih’ being the birthplace of Lord Ram. This is evident from the witness testimonies which indicate that pilgrims offered prayer standing at the railing by looking towards the sanctum sanctorum.” 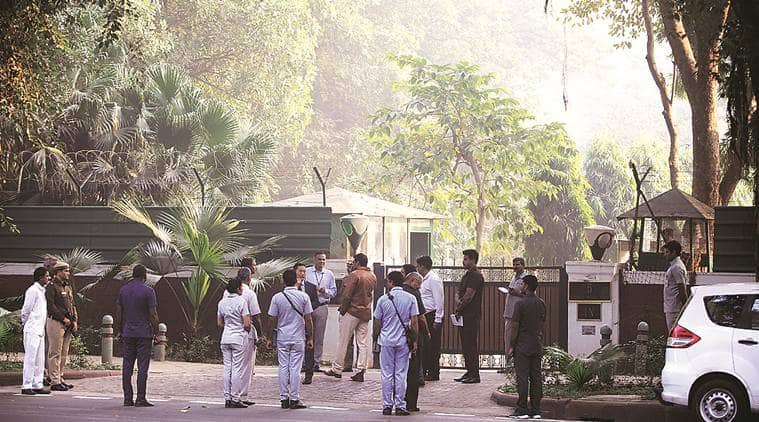 Security outside CJI Gogoi’s residence in Delhi ahead of the Supreme Court verdict on Saturday. (Express photo by Praveen Khanna)

It acknowledged that “exclusion of the Muslims from worship and possession took place on the intervening night between 22/23 December 1949 when the mosque was desecrated by the installation of Hindu idols” and “the ouster of the Muslims on that occasion was not through any lawful authority but through an act which was calculated to deprive them of their place of worship”.

Noting that “during the pendency of the suits, the entire structure of the mosque was brought down in a calculated act of destroying a place of public worship” and that “Muslims have been wrongly deprived of a mosque which had been constructed well over 450 years ago”, the Bench said: “This Court in the exercise of its powers under Article 142 of the Constitution must ensure that a wrong committed must be remedied.”

“Having weighed the nature of the relief which should be granted to the Muslims, we direct that land admeasuring 5 acres be allotted to the Sunni Central Waqf Board either by the Central Government out of the acquired land or by the Government of Uttar Pradesh within the city of Ayodhya. This exercise, and the consequent handing over of the land to the Sunni Central Waqf Board, shall be conducted simultaneously with the handing over of the disputed site comprising the inner and outer courtyards,” it said.

“The Central Government shall, within a period of three months from the date of this judgment, formulate a scheme pursuant to the powers vested in it under Sections 6 and 7 of the Acquisition of Certain Area at Ayodhya Act 1993. The scheme shall envisage the setting up of a trust with a Board of Trustees or any other appropriate body under Section 6. The scheme to be framed by the Central Government shall make necessary provisions in regard to the functioning of the trust or body including on matters relating to the management of the trust, the powers of the trustees including the construction of a temple and all necessary, incidental and supplemental matters; Possession of the inner and outer courtyards shall be handed over to the Board of Trustees of the Trust or to the body so constituted. The Central Government will be at liberty to make suitable provisions in respect of the rest of the acquired land by handing it over to the Trust or body for management and development in terms of the scheme framed in accordance with the above directions.”

“Nirmohi Akhara’s claim to be a shebait stands rejected. However, having regard to the historical presence of Nirmohi Akhara at the disputed site and their role, it is necessary for this Court to take recourse to its powers under Article 142 to do complete justice. Hence, we direct that in framing the scheme, an appropriate role in the management would be assigned to the Nirmohi Akhara,” it said.

The Bench agreed with the Archaeological Survey of India (ASI) findings about a centuries-old structure of Hindu religious origin having existed beneath the disputed site and that the Masjid was not constructed on vacant land. But it noted that “mere existence of a structure underneath the disputed property cannot lead to a legally enforceable claim to title today”.

It upheld the Hindu claim that Ramlalla was a juristic person, but rejected Ramjanmabhoomi’s claim to the same, saying accepting the claim would extinguish all competing proprietary claims. It said that the Sunni Central Waqf Board had not been able to establish its case of adverse possession of the structure, nor able to prove waqf by user.

The Hindus, it ruled, were in “exclusive and unimpeded possession of the outer courtyard where they have continued worship” while the “inner courtyard has been a contested site with conflicting claims of the Hindus and Muslims”.

Awarding the disputed site for construction of a temple, the Bench concluded that the inner and outer courtyards on the disputed site was “one composite whole” and that the railing erected outside the Masjid in 1856-57 to demarcate the area as inner and outer courtyards following communal riots “did not either bring about a sub-division of the land or any determination of title”.

Referring to the construction of the Ram Chabutra in close proximity to the railings from where Hindus made offerings to the ‘Garbh Grih’, the Bench said “there can be no manner of doubt that this was in furtherance of their belief that the birthplace of Lord Ram was within the precincts of and under the central dome of the mosque”.

The ruling said that though the dispute is over immovable property, “the Court does not decide title on the basis of faith or belief but on the basis of evidence. The law provides us with parameters as clear but as profound as ownership and possession. In deciding title to the disputed property, the Court applies settled principles of evidence to adjudicate upon which party has established a claim to the immovable property”.

It also said “scriptural interpretations are susceptible to a multitude of inferences. The Court would do well not to step into the pulpit by adjudging which, if any, of competing interpretations should be accepted. Faith is a matter for the individual believer. Once the Court has intrinsic material to accept that the faith or the belief is genuine and not a pretence, it must defer to the belief of the worshipper. This, we must do well to recognise, applies across the spectrum of religions and their texts, Hinduism and Islam being among them. The value of a secular Constitution lies in a tradition of equal deference”.