The SC has to rule on appeals against the verdict of the Allahabad HC which ordered a three-way division of the disputed 2.77 acres between the Nirmohi Akhara sect, the Uttar Pradesh Sunni Central Waqf Board and Ramlalla Virajman. 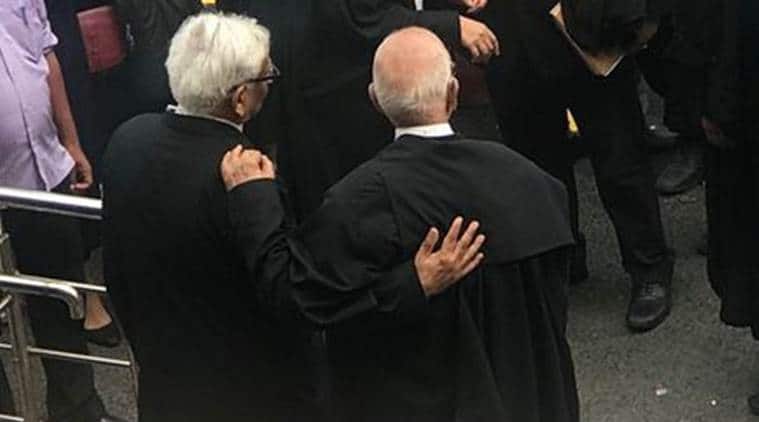 Wrapping up hearings spread over 40 days on appeals against the 2010 verdict of the Allahabad High Court which ordered a three-way division of the disputed Ram Janmabhoomi-Babri Masjid site in Ayodhya, a Constitution Bench of the Supreme Court reserved its ruling Wednesday.

The verdict is expected before Chief Justice of India Ranjan Gogoi, heading the bench, retires on November 17.

The bench, also comprising Justices S A Bobde, D Y Chandrachud, Ashok Bhushan and S A Nazeer, gave the parties three days to file their written submissions, if any.

The hearings concluded after the day saw high drama with the Uttar Pradesh Sunni Central Waqf Board, one of the three parties to the title suit, asserting that “the demolished (Babri Masjid) building belonged to us” and “the right to reconstruct it also belong to us… nobody else has the right”. Its counsel, senior advocate Rajeev Dhavan, even tore up a map, which a Hindu party said was that of the Ram Janmasthan, in open court.

Appearing for Ramlalla Virajman — the idol of child Ram is also a party to the title suit — senior advocate C S Vaidyanathan said “this place, we have believed for centuries, is Ram Janmasthan. We can’t call any place in Delhi as Ram Janmasthan. They (Muslims) may have several other places of worship. We have only this”.

The Supreme Court has to rule on appeals against the September 30, 2010 verdict of the Allahabad High Court which ordered a three-way division of the disputed 2.77 acres between the Nirmohi Akhara sect, the Uttar Pradesh Sunni Central Waqf Board and Ramlalla Virajman.

Dhavan said Muslims were refused permission to pray at the mosque by Hindus through “intimidating means”, but that does not take away the Waqf instituted by Mughal emperor Babur — according to the Waqf Board, the Babri Masjid was constructed by Babur’s commander Mir Baqi in 1528.

On Tuesday, senior advocate K Parasaran, appearing for those in favour of a temple, had said that in 1886, the Faizabad district court had stated that a mosque had been constructed on the disputed land considered holy by Hindus in Ayodhya, and that it was up to the Muslims to prove that the finding was wrong.

Responding to this, Dhavan said the Muslim parties did not have to file an appeal as the finding was in their favour. He said what was stated in the order of the district judge were only “observations” and that all ambiguities were cleared by the Oudh Commissioner who sat in appeal and held that the Hindus had no title but only prescriptive rights to pray.

On conquests by Islamic rulers, Dhavan said India was not political entity and there were even conquests inside India, and many of these were by Hindus. “Were they any different because they were Hindus,” he asked. Recalling that the Sultanate began in India only in 1206 AD, Dhavan said “they” would say all the Muslims in the country were converted by force. “The fact is Islam is an extremely attractive faith for people living in a caste-ridden society,” he said.

In an apparent reference to Parasaran’s remark that Babur’s invasion of India and the subsequent demolition of the Ram temple was a historic wrong, Dhavan said if the argument was that India can only be perceived as Hindu, it was a “communal argument” and “if it was against other races coming to India, then it was a racist argument”.

Appearing for the All India Hindu Mahasabha, senior advocate Vikas Singh said that the Sunni Waqf Board was relying on an order of 1861 by a board to show that the Babri Masjid had recieved grants from the British government. But the fact was that the board, he said, had already been dissolved in 1858 when the Government of India Act came into effect.

Singh said an iron fence put up after the communal riots of 1855 to separate the Babri Masjid from the outer courtyard was “only for limiting the position to which one could go”. He sought to compare it with the situation in a temple like Tirupati where a worshipper cannot touch the idol and has to pray from a distance.

Senior advocate Sushil Kumar Jain, appearing for the Nirmohi Akhara, referred to alleged discrepancies in the map submitted by the Sunni Waqf Board and said it was not even aware of the ground situation in Ayodhya at the time of filing the suit in 1961.

Appearing for Ramlalla Virajman, Vaidyanathan said there was no evidence to show that Muslims offered prayers at the disputed site after 1934 while Hindus continued to worship at the place. He said Muslims have not been able to prove that they had exclusive possession of the disputed area until 1949. All evidence, he said, show that Hindus never gave up their claim. Unless Muslims had exclusive possession, the property cannot be dedicated as Waqf, he said.