Atal Bihari Vajpayee in AIIMS Highlights: "He was admitted with complaints of lower respiratory tract infection and kidney issues. He is in the ICU and undergoing dialysis," a source at the hospital said.

Dr Manmohan Singh on Tuesday visited former prime minister Atal Bihari Vajpayee, who was admitted at All India Institute of Medical Sciences (AIIMS) following complaints of lower respiratory tract infection and kidney issues. Prime Minister Narendra Modi had also visited the ailing leader yesterday who was undergoing dialysis at the AIIMS. Modi, who was in the hospital for nearly an hour, interacted with the former PM’s family and also spoke to doctors about Vajpayee’s health.

“He was admitted with complaints of lower respiratory tract infection and kidney issues. He is in the ICU and undergoing dialysis,” a source at AIIMS said.

The 93-year-old leader has been admitted on doctors’ advice and will be under the supervision of AIIMS Director Randeep Guleria, the BJP said in a statement. The BJP stalwart, who served as PM between 1998-2004, slowly withdrew from public life as his health deteriorated and has been confined to his residence for many years.

Former prime minister Atal Bihari Vajpayee has been admitted in AIIMS in New Delhi. Follow this space for LIVE UPDATES: 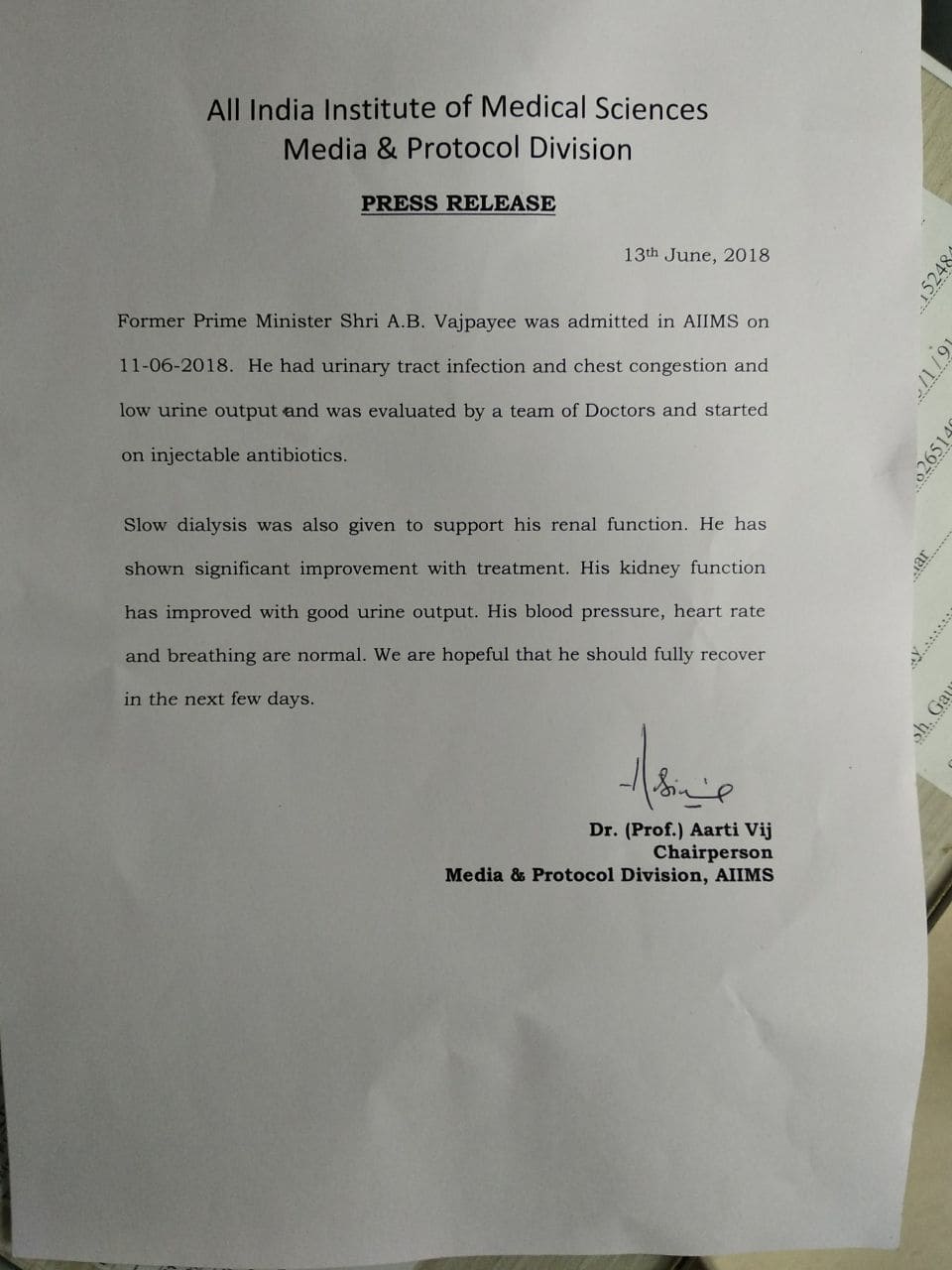 AIIMS in a statement has said that Atal Bihari Vajpayee was admitted on June 11 with urinary tract infection and chest congestion.

The latest bulletin issued by AIIMS said that the condition of Atal Bihari Vajpayee is stable and he "continues to respond well to treatment". The former prime minister was admitted to the hospital yesterday with urinary tract infection, lower respiratory tract infection and kidney issues. Former prime minister Dr Manmohan Singh also paid a visit to the ailing leader this evening.

Vajpayee Ji had worked for our country and we respect him: Rahul Gandhi

Congress President Rahul Gandhi on Tuesday said that the party respects Atal Bihari Vajpayee as he had worked for the country. He said that Congress had contested against the ailing leader but he went to meet him yesterday because he is a soldier of Congress. Rahul, while addressing in Mumbai today, appreciated the role played by Vajpayee during his tenure as PM. On his Monday's visit to meet the former PM at AIIMS, he said 'This is our culture'.

As per a report in PTI, Pankaj Jain, treasurer of Delhi BJP Yuva Morcha,  performed a 'havan' outside gate number one of the hospital, praying for Vajpayee's quick recovery and long life.

Earlier in the day, a havan for the former PM was also conducted in Kanpur by BJP workers.  As per a statement released by AIIMS, Vajpayee is responding to treatment and is currently on injectable antibiotics.

Andhra Pradesh CM, N Chandrababu Naidu was quoted by news agency ANI as saying: "I spoke to the officers in Delhi on the health of Former Prime Minister Atal Bihari Vajpayee. Praying to God for his speedy recovery and his return to home with good health."

Atal Bihari Vajpayee will remain in the ICU of the cardio-thoracic center of AIIMS, news agency PTI reported. The former PM underwent dialysis on Monday.

The report also stated that the entire corridor of the first-floor ICU has been cordoned off, and only after proper verification of identity cards attendants and relatives are being allowed.

Congress President Rahul Gandhi and leader KC Venugopal were among the first to visit Vajpayee even as AIIMS sources said that they were given no prior notice of their arrival.  Click here 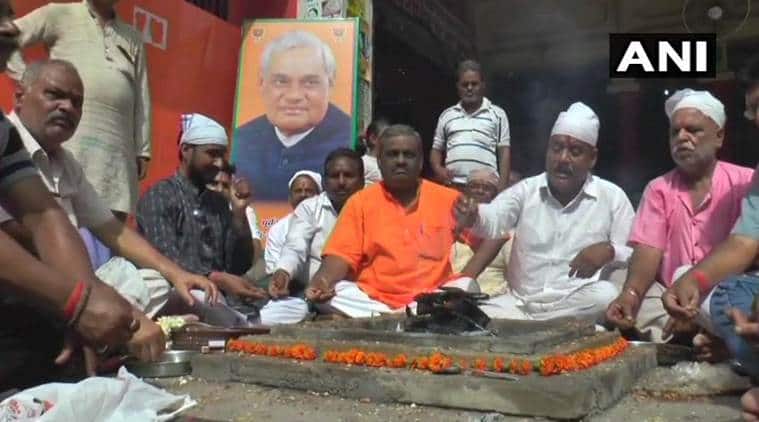 A 'havan' for former PM Atal Bihari Vajpayee was conducted by BJP workers in Kanpur. The former PM is currently undergoing treatment for urinary tract infection at AIIMS, New Delhi.

PM @narendramodi visited former Prime Minister Shri Atal Bihari Vajpayee at AIIMS today. He was at AIIMS for about 50 minutes.

PM Modi on Monday visited BJP patriarch at AIIMS hospital in New Delhi. Spending nearly 50 minutes at the hospital, Modi interacted with the family members of Vajpayee. He also spoke with the doctors and enquired about the former PM's health condition. 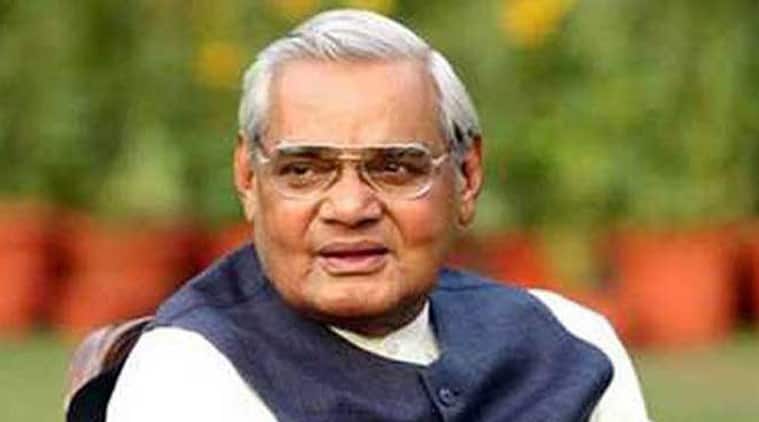 Former PM Atal Bihari Vajpayee is undergoing treatment at the AIIMS, New Delhi, after being diagnosed with a urinary tract infection. The veteran BJP leader was admitted in the hospital yesterday following complaints of a lower respiratory tract infection and kidney issues. A team of doctors, under the supervision of AIIMS Director Randeep Guleria, is attending to the nonagenarian leader.

A host of leaders, including PM Narendra Modi and Congress president Rahul Gandhi, paid visits to the ailing leader. PM Modi, who spent around 50 minutes at the hospital, met the doctors treating Vajpayee and enquired about the former PM's health condition.

BJP national chief Amit Shah was also present at the hospital. He had a detailed discussion with the doctors about Vajpayee's treatment and also met the former prime minister's family members at the hospital.

Union Minister Dr Harsh Vardhan stated that the health condition of former prime minister Atal Bihari Vajpayee is now fine, and that there is nothing to worry about, news agency ANI reported. Have complete hope that Vajpayee will be discharged tomorrow: Vijay Goel

Union Minister Vijay Goel, who visited Vajpayee, told reporters, "His (Vajpayee's) medical bulletin has been released. He has a urine infection and is undergoing treatment. I have complete hope that he will be able to go home tomorrow."

His medical bulletin has been released, he had a urine infection & is being treated for that. I have complete hope that he will be able to go home tomorrow: Vijay Goel after visiting former PM Atal Bihari Vajpayee at AIIMS #Delhi pic.twitter.com/ShBEGGtrml

Nothing to worry, says Harsh Vardhan

"He is fine, there is nothing to worry," Union Minister Dr Harsh Vardhan said after coming out of AIIMS.

He is fine, there is nothing to worry: Union Minister Dr Harsh Vardhan after visiting former PM Atal Bihari Vajpayee at AIIMS #Delhi pic.twitter.com/mifEvh0YDL

India is waiting for you to return healthy from AIIMS, says Shivraj Singh Chouhan

Madhya Pradesh Chief Minister Shivraj Singh Chouhan said, "I pray to god for the speedy recovery of Atal Bihari Vajpayee who have always inspired us to fight against hardship. The whole country is waiting for you to return healthy from AIIMS."

AIIMS, in a bulletin, said the former PM is suffering from some kidney-related ailment and also has an infection. Vajpayee has been admitted in the Cardiothoracic Intensive Care Unit, India Today Television reported.

Earlier in the day, a statement released by the former PM's office said, “As per the advice of doctors, former PM Atal Bihari Vajpayee has been admitted in AIIMS today for routine check-up and investigations. He will be under the supervision of Dr Randeep Guleria, Director, AIIMS, there."

In a fresh statement issued later, the office said, “Former PM AB Vajpayee has been admitted to AIIMS today for examination and management. He is stable. A team of doctors under the supervision of Dr Randeep Guleria, Director, AIIMS, are conducting tests.”