Atal Bihari Vajpayee passes away at the age of 93.

Former Prime Minister Atal Bihari Vajpayee passed away on Thursday after a prolonged illness. He breathed his last at 5.05 pm at the All India Institutes of Medical Sciences.

Prime Minister Narendra Modi expressed grief over Vajpayee’s demise and said, “I have no words, I am filled with emotions right now.Our respected Atal ji is no more. Every moment of his life he had dedicated to the nation.”

Overwhelmed with sorrow, President Ram Nath Kovind said he was “extremely sad” to hear the passing of the former PM and a “true Indian statesman”.

Congress Chief Rahul Gandhi too expressed his condolence to Vajpayee’s family and all his admirers. “Today India lost a great son. Former PM, Atal Bihari Vajpayee ji, was loved and respected by millions. My condolences to his family & all his admirers. We will miss him,” said Gandhi.

Pakistan's Tehreek-e-Insaf (PYI) chief Imran Khan also extended his condolences over the sad demise of the former PM. The Prime-Minister Imran Khan said, “The sub-continent has lost a phenomenal and a visionary political figure today." Lauding his role in maintaining Pakistan-India bilateral relations, Imran Khan stated that his contribution will never be forgotten.
The PTI chairman stated that there could be political differences between the two countries, however, the desire to establish peace exists on both sides of the border.
Khan also said that the former PM’s sad demise has created a vacuum in the political arena of the sub-continent. In order to pay homage to his tireless services, he said, we can resort to the establishment and promotion of peace across the region. “I extend sympathies to the people of India in this hour of grief,” he said.

With the sad demise of Shri Atal Bihari Vajpayee, an era has ended. He was liked by his opponents and loved by the party cadres. His amiability and generosity were the unique aspects of his personality. My heartfelt tribute to Shri Atal ji.

The void behind will remain forever: Mohan Bhagwat

Taking to Twitter, RSS chief Mohan Bhagwat said, "A great personality, a steadfast and universally accepted leader, who instilled Bharatiya culture and values in public life, Atalji has left us today. The void left behind will remain forever. We join the nation in paying our deepest respects to the departed soul."

"Over 2.50 crore people of Chhattisgarh will always remember him as the founder of this state.  In 1998, Vajpayee had promised to form Chhattisgarh while addressing a massive public rally in Raipur and he fulfilled his promise in 2000 (the year the state came into existence)," he said.

Recalling his time with Vajpayee, Singh said he had the opportunity to work under the leadership of Vajpayee from 1999 to 2003 as a Union minister.

His death leaves behind a huge void: Sonia Gandhi

Former Congress chief Sonia Gandhi says, "throughout his life, he stood for democratic values and demonstrated this commitment in all his acts whether as a parliaemntarian, a cabinet minister or PM."

His warm personality and his gift of friendship won him admirers and friends across the political spectrum and from every walk of life. His death leaves behind a huge void. I join millions of our fellow Indians in mourning his loss and pray for the departed soul: Sonia Gandhi pic.twitter.com/kqvYH3VlUd

He was a tree under whose shade many found refuge: Union Minister Ram Vilas Paswan

I pay tribute to him. The country has lost the tallest leader. He was a tree under whose shade many found refuge: Union Minister Ram Vilas Paswan #AtalBihariVajpayee pic.twitter.com/7txs1rjQhd

We are saddened by the passing of former PM of India #AtalBihariVajpayee. We will remember him as one of India’s greatest leaders. Shri Vajpayee was much respected in the UK as a statesman par excellence: British High Commissioner to India, Dominic Asquith (file pic) pic.twitter.com/WPGAMh5PH3

We never had any differences: CM N Chandrababu Naidu

"I had a good rapport with him. We never had any difference," says Naidu. Atal Bihari Vajpayee was a towering figure in India's national life. He was a spell-binding orator, a leader of great vision, a patriot to the core for whom national interest was paramount, says UPA chairperson Sonia Gandhi. @IndianExpress pic.twitter.com/bAc88K3hDz

He was our friend & highly respected in Bangladesh: PM Sheikh Hasina

Deeply shocked at sad demise of former PM of India #AtalBihariVajpayee, one of the most famous sons of India. He'll be remembered for contributing towards good governance & highlighting issues affecting common people of India as well as regional peace& prosperity: Bangladesh PM pic.twitter.com/XqjcdLWBcx

India has lost the most admired and respected 'Bhishma Pitamah' of public life: Maharashtra Governor

Reminiscing Vajpayee's oratory skills and his poetry, rao added, "In his demise, India has lost the most admired and respected 'Bhishma Pitamah' of public life; while I have lost my dearest leader."

He called Vajpayee as his "idol" and mian inpiration to enter into public life.

Pakistan government mourns Vajpayee's death and recalls his contributions in bringing a change in Indo-Pak relations and a key supporter of SAARC and regional cooperation for development.

He was a renowned statesman who contributed to bringing a change in Indo-Pak relations&remained key supporter of SAARC & regional cooperation for development. Pakistan Govt & people extend their heartfelt condolences to his family & to Govt & people of India: Pakistan government

Odisha CM Naveen Patnaik grieves over the passing of Vajpayee

We are all deeply grieved by the sad demise of Vajpayee ji. He was one of the tallest leaders of India. He was loved by the entire nation. May his soul rest in peace: Naveen Patnaik, Odisha CM #AtalBihariVajpayee pic.twitter.com/WG0kGuRtPL

After a sending his deep condolence via Twitter, Prime Minister Narendra Modi addressed the nation and referred to Vajpayee as India's 'anmol ratan'. 'We are at a loss of words. His demise has marked the end of an era. In Atal ji's passing away, it is as if I have lost my father. It's a void which can never be filled. My condolences are with his family. His simplicity will always aspire us,' said Modi.

"His loss is beyond words. It is an end of an era. He taught me the value of organisation and rule and gave me the strength and support for it. Whenever he would meet, he would offer a hug," says Modi. 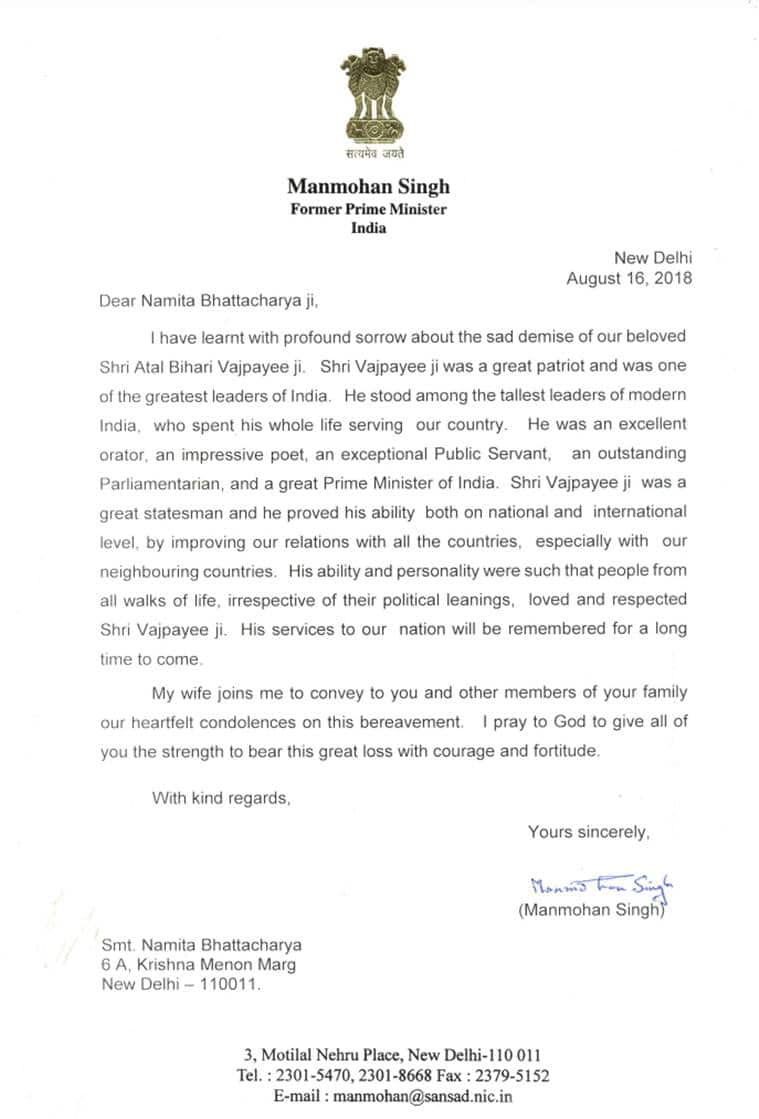 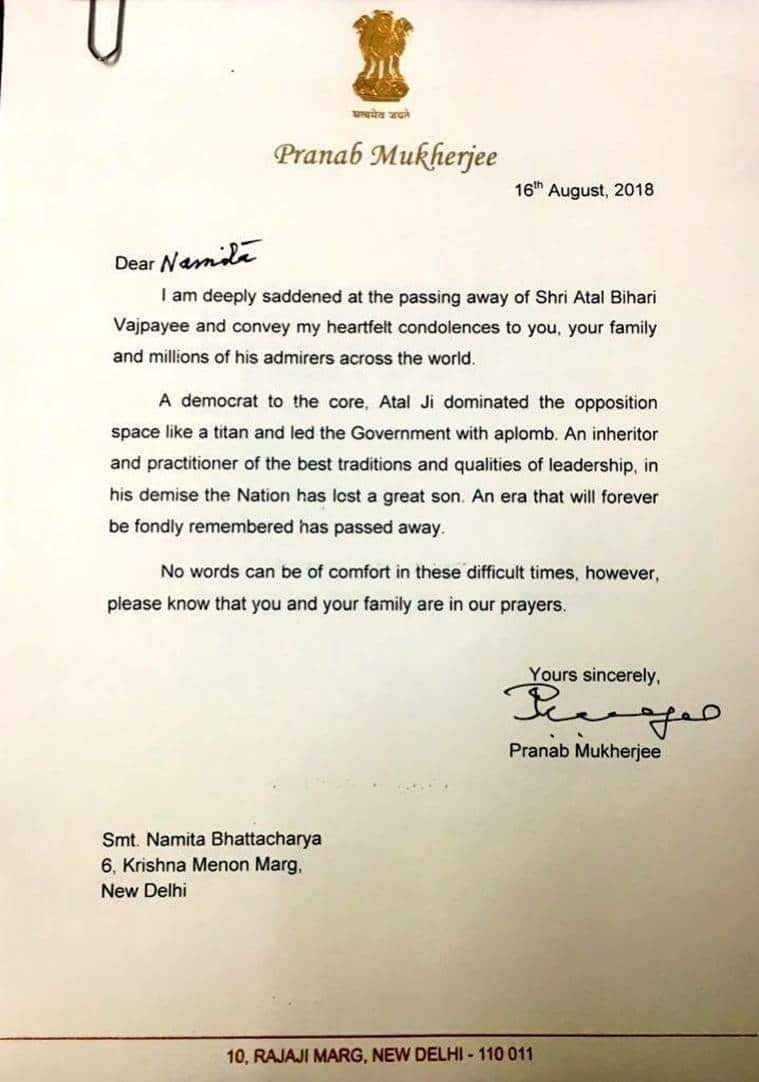 Jharkhand Chief Minister Raghubar Das expressed despair over Vajpayee's demise, calling Vajpayee his "guru" akin to his father. Das referred Vajpayee as the "creator" of Jharkhand and said the void would be impossible to fill.

Governor Droupadi Murmu said Vajpayee was not popular just in India but all over the world. He further said Vajpayee was known as a successful creator of coalition politics, never used disrespectful language and dedicated his life for the uplift and welfare of the country and mentioned the quadrilateral roads, Sarva Sikhsa Abhiyan, self-help groups, women's uplift and rural road works taken during his time.

On the demise of Atal Bihari Vajpayee's, Central government announced a seven-day state mourning throughout India, during which the national flag will be flown at half-mast across the country. State funeral will also be accorded. Following the Central government's announcement, state government including Odisha, Uttar Pradesh, Madhya Pradesh, Jharkhand, Punjab, Bihar, Manipur, Tamil Nadu and Delhi declared mourning and declared a government holiday tomorrow. 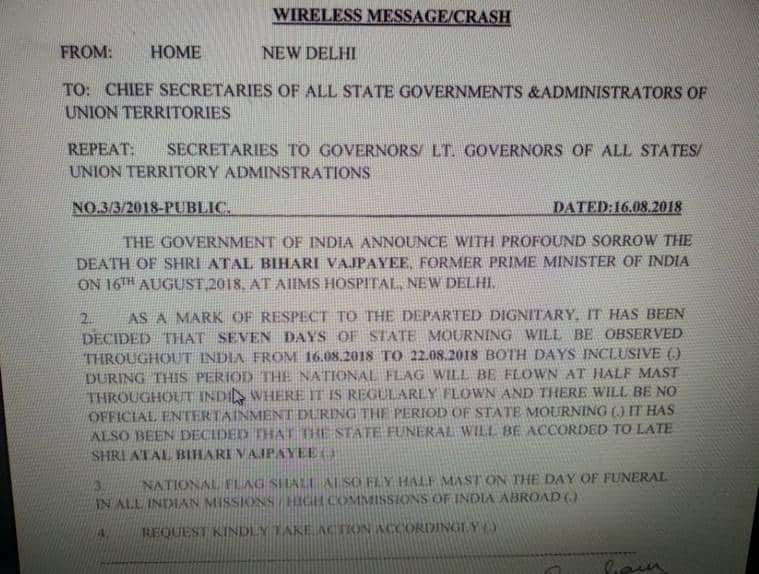 The poor has lost their voice: BJP President Amit Shah

BJP President Amit Shah holds a press conference and calls Vajpayee the pole star of the Indian sky. Shah claims it impossible to fill Vajpayee's absence in politics and hails Vajpayee's patriotism. 'Whatever Atal Ji spoke, he spoke in the favour of the country, be it his fight against the Emergency, his stand for Bangladesh or his effort in proliferating Hindi, he did not just work as the chief of the BJP but worked as a politician for the country. May the God give all of us the strength to cope with the demise of Atal ji,' says Shah.

'The country has lost its poet, its orator, the poor have lost its voice, and many youths have lost their inspiration with Atal Ji's demise,' says Shah.

Further, Shah informed at 9 am tomorrow, Vajpayee's mortal remains will be taken to BJP headquarters. At 1 pm his last journey will begin and the funeral will be held at 4 pm at Smriti Sthal.

A host of leaders including Prime Minister Narendra Modi visited the BJP patriarch at AIIMS. A voracious reader, Vajpayee was widely known and respected for his love for poetry and as an eloquent speaker. He was conferred Padma Vibhushan in 1992 in recognition of his services to the nation.