Atal Bihari Vajpayee funeral Highlights: The former PM passed away at AIIMS Thursday after battling a prolonged illness. He was 93. On Friday, a state funeral was accorded to the departed leader as thousands mourned over the loss.

Atal Bihari Vajpayee funeral Highlights: Former prime minister Atal Bihari Vajpayee was cremated with full state honours at Smriti Sthal on the banks of the Yamuna in Delhi. His adopted daughter Namita Bhattacharya lit the funeral pyre and the poet-politician was given a gun salute. His body was shifted from his residence to the BJP headquarters this morning, where scores of leaders, cutting across party lines, paid tribute to the leader through the day. Prime Minister Narendra Modi and BJP chief Amit Shah walked beside the coffin as it was brought to Smriti Sthal. Vajpayee, a stalwart of the BJP, passed away on Thursday after battling a prolonged illness at the All India Institute of Medical Sciences (AIIMS). He was 93. The charismatic leader is survived by his adopted daughter Namita Kaul Bhattacharya. The government has announced seven days of state mourning, and the national flag will be flown at half-mast for seven days across the country.

Vajpayee's demise an irreparable loss, he understood how to bring out his best players: Tendulkar

Cricket legend Sachin Tendulkar on Friday condoled the demise of former prime minister Vajpayee's demise, as the BJP stalwart was laid to rest with full state honours in Delhi today.

He understood how to bring the best out of his players. He was always liked by everyone. I was fortunate enough to see both, a great cricketer and a wonderful person. It is an irreparable loss: Sachin Tendulkar after paying last respects to Ajit Wadekar at his residence in Mumbai pic.twitter.com/GqxYTGDDfx

The National Socialist Council of Nagaland (NSCN) Isaak-Muivah faction has said that it is ‘deeply saddened’ to hear the demise of Atal Bihari Vajpayee, former Prime Minister of India. A statement issued by the Ministry of Information and Publicity (MIP), said late Vajpayee was a great leader who could understand the Nagas and was committed to find an honourable settlement to the Naga issue. READ MORE 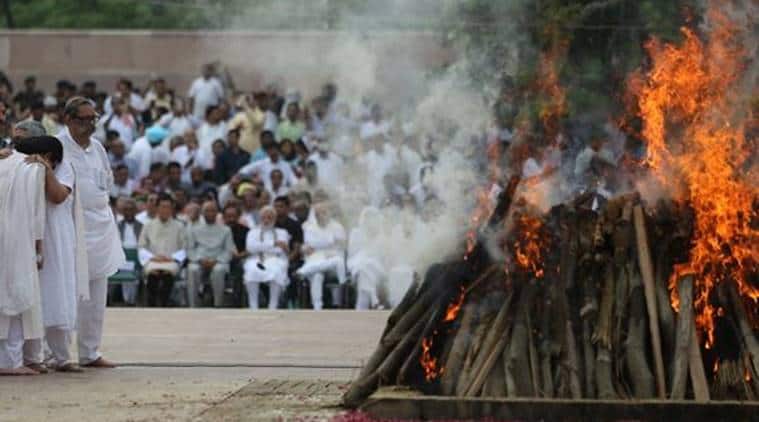 A girl was seen paying tribute to former PM Atal Bihari Vajpayee while his mortal remains were being taken from the old quarters in Delhi for cremation. The last rites were conducted at Smriti Sthal in Delhi as the departed leader was accorded a state funeral. The moment was captured by The Indian Express photojournalist Abhinav Saha (@abhinavsaha).

A girl paying tribute to the former PM #AtalBihariVajpayee from her residence, while his mortal remains was being taken from the old quarters of Delhi, to perform his last rites. @IndianExpress @ExpressImages #Daryaganj pic.twitter.com/Q98rftesRV

Due to state mourning, Change of Guard ceremony on the forecourt of Rashtrapati Bhavan will not be held tomorrow

Change of Guard ceremony on the forecourt of Rashtrapati Bhavan will not be held tomorrow due to state mourning.

The 'Change of Guard' ceremony on the forecourt of Rashtrapati Bhavan will not be held tomorrow due to state mourning. #AtalBihariVajpayee pic.twitter.com/Qofsv5t9kn

Ashes of former prime minister Atal Bihari Vajpayee, who was accorded a state funeral today, will be immersed in every rives in Uttar Pradesh including Ganga, Yamuna and Tapti. Uttar Pradesh government said that this will be done to respect the grand stature of iconic BJP leader.

Ashes of former prime minister #AtalBihariVajpayee will be spread in every river in Uttar Pradesh including Ganga, Yamuna, and Tapti, to respect his grand stature: UP government pic.twitter.com/UC2pW12CIq

Atal Ji will live on in hearts and minds of every Indian: PM Modi

Prime Minister Narendra Modi, who regarded Vajpayee as a father figure to him, said that Atal Ji will live on in hearts and minds of every Indian.

Atal Ji, you will live on in the hearts and minds of every Indian.

No words can ever do justice to your rich contribution towards the making of our country. pic.twitter.com/TcQEmF68Mi

People from all parts of the country came to pay tributes to Vajpayee: PM Modi

Prime Minister Narendra Modi tweets as former PM Vajpayee was cremated at Smriti Sthal in Delhi with full state honours. He said that people came from all parts of India, from all sections of society to pay tributes to an extraordinary personality who made an extraordinary contribution to the nation.

Among the Indian politicians and leaders across party lines, foreign dignitaries were also present at Smriti Sthal where Vajpayee was cremated with full state honours

The last rites are being conducted by Vajpayee's adopted daughter Namita Bhattacharya. She has lit the funeral pyre.

Last rites ceremony of the former PM is underway

Last rites ceremony of the former PM is underway. You can also watch the LIVE telecast on DD news

Body of former PM to be kept on a pyre soon

The body of former PM Vajpayee who passed away yesterday will be kept on a pyre soon. State funeral is being accorded to the poet leader and a great statesman who remained unmarried throughout his life.

Delhi: Tricolour wrapped around mortal remains of #AtalBihariVajpayee handed over to his granddaughter Niharika. pic.twitter.com/Ela6rD3PWG

President Ram Nath Kovind pays his respect to Vajpayee at Smriti Sthal. Amid a teary-eyed atmosphere, leaders across party lines are present to pay their last respects to the great leader.

Also Read | Tears, grief across political faultlines, state funeral today | PM Modi’s tribute: Vajpayee overcame the hesitation of our nation | Off camera, a PhD student in mourning to a PWD worker on the job

Vajpayee was awarded India's highest civilian award, the Bharat Ratna, in March 2015. During his second term as prime minister, Vajpayee ordered nuclear tests in May 1998 in a strategic masterstroke to blunt Pakistan’s nuclear ambitions. He followed this up with peace overtures to Pakistan, riding on the first direct bus from India to Pakistan in February 1999.