At UNSC meet on Ukraine, India walks the tightrope

While Delhi’s statement talked about “legitimate security interests of all countries”, it is widely perceived as somewhat aligned with the Russian interests. 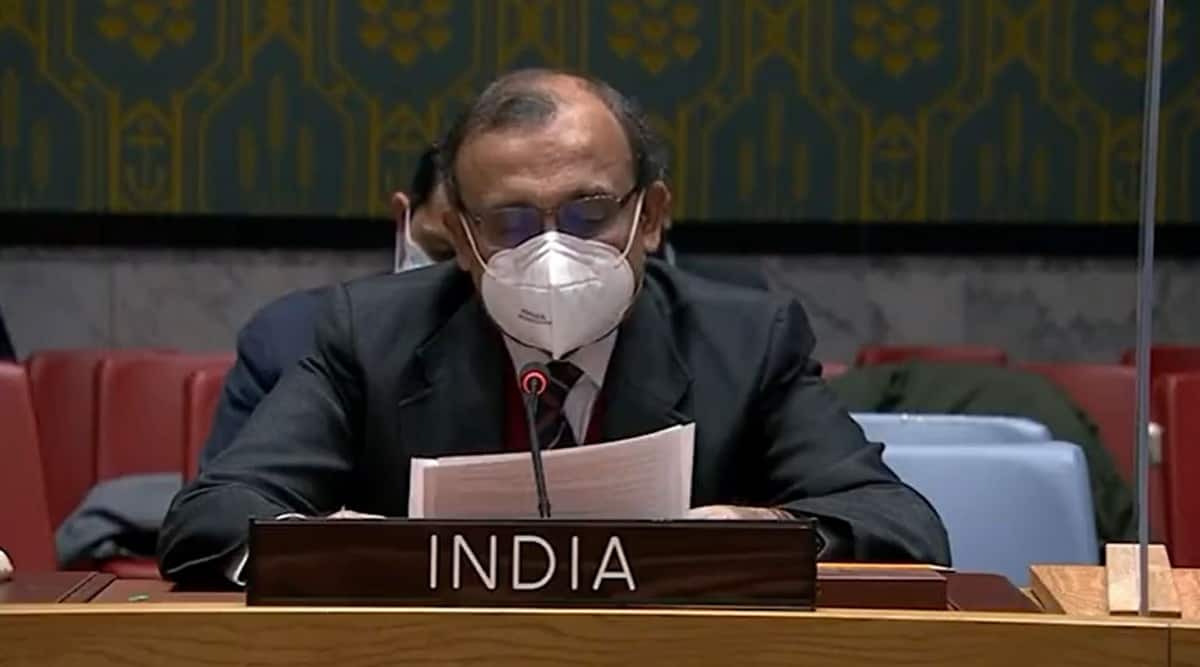 Stressing that “quiet and constructive diplomacy is the need of the hour”, Tirumurti said that “any steps that increase tension may best be avoided by all sides in the larger interest of securing international peace and security”. (Twitter/India at UN, NY)

On a day when a senior Russian official visited India and met his counterparts in the Ministry of External Affairs, New Delhi on Monday played a tightrope walk with a slight tilt towards the Russian position at a meeting of the UN Security Council on Ukraine.

Articulating its position on “legitimate security interests” that echoes with a nuanced tilt towards the Russian position, India’s Permanent Representative at the UNSC T S Tirumurti said, “India’s interest is in finding a solution that can provide for immediate de-escalation of tensions taking into account the legitimate security interests of all countries and aimed towards securing long term peace and stability in the region and beyond.”

While Delhi’s statement talked about “legitimate security interests of all countries”, it is widely perceived as somewhat aligned with the Russian interests.

In Explained |Explained: What are India’s stakes in its ties with Ukraine & Russia?

Stressing that “quiet and constructive diplomacy is the need of the hour”, Tirumurti said that “any steps that increase tension may best be avoided by all sides in the larger interest of securing international peace and security”.

“I reiterate our call for the peaceful resolution of the situation by sincere and sustained diplomatic efforts to ensure that concerns of all sides are resolved through constructive dialogue,” he said.

Stakes on both sides, a balancing act

India's statement is a balancing act, keeping in mind its vital interests and stakes on both sides of the divide. But it is perceived to be closer to Moscow’s position, although Delhi has talked about security interests of “all sides”. Also, it does not convey any condemnation publicly of Russian actions, much to Western bloc’s disappointment. Overall, it does not want to take sides clearly.

This is India’s second statement on the Ukraine issue, and a more expansive one after the statement made by the MEA spokesperson last week.

This statement was made at the UNSC meeting on Ukraine, where Russia and China tried to block discussions while 10 UNSC members, including the US, UK and France, voted in favour of the discussion. Here too, India was among three countries along with Kenya and Gabon to abstain, in a bid to maintain its neutral position and not side with either bloc.

The visiting Russian official also called on Foreign Secretary Harsh Vardhan Shringla and briefed him on Russian priorities during its upcoming Presidency of the UNSC.

Hours later, Tirumurti in his statement at the UNSC said, “We have been closely following the evolving developments relating to Ukraine, including through ongoing high-level security talks between Russia and the United States, as well as under the Normandy format in Paris.”

“It is our considered view that the issue can only be resolved through diplomatic dialogue,” he said.

He said that more than 20,000 Indian students and nationals live and study indifferent parts of Ukraine. “The well-being of Indian nationals is of priority to us,” he said, voicing Delhi’s concern.

Those who raise voice against joblessness are being beaten up: Priyanka in Noida