As work from home has become a new normal for a number of politicians, Bajwa has got prepared two offices at his official residence in Chandigarh for meeting public and officers, respectively. Both the offices have shields. “I have also got a similar arrangement done at my residence at Qadian.” 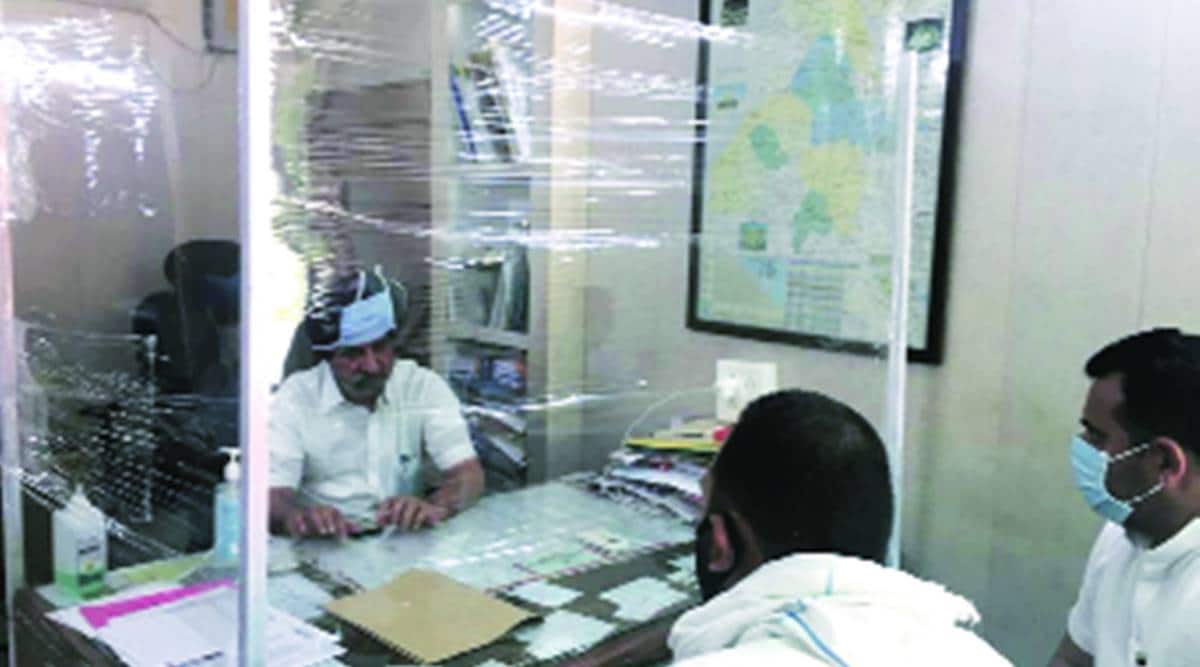 Erecting protective and transparent shields on their tables, using UV sanitisers to disinfect office files and documents, mist sanitisers for cleaning hands of visitors, making use of video conferencing and WhatsApp video calls — this is how politicians in Punjab are meeting public amid Covid-19 pandemic.

In order to protect himself from the contagion, and to continue with the public meetings and office work, Rural Development and Panchayats Minister Tript Rajinder Singh Bajwa has erected a four-ft-high shield made of transparent PVC sheet, and an acrylic sheet on his table to create a barrier between him and the public.

Although Bajwa has already had Covid, he does not want to take any chances. “I sit on this side of the protective shield and the visitors are made to sit on the other side. They get assured after meeting their minister and we get protected. The shield would not allow droplets to cross to each other. This becomes protective for both the parties,” Bajwa told The Indian Express.

As work from home has become a new normal for a number of politicians, Bajwa has got prepared two offices at his official residence in Chandigarh for meeting public and officers, respectively. Both the offices have shields. “I have also got a similar arrangement done at my residence at Qadian.”

He said, “No matter how many times you talk to people on the phone, they still want to meet you. Hence, we thought of this idea.”

Bajwa meets about 100-150 people at his Chandigarh residence every day and 400-600 people at Qadian on weekends. “To ensure that the applications handed by people to me are sanitised, I have purchased a UV sanitiser box recommended to me by IIT, Ropar. All the papers and files first go through this box before landing at my table,” he added.

Health Minister Balbir Singh Sidhu too has a make-shift U-shaped glass shield that he can keep on any table to create a barrier between him and the public. “I usually meet people on my lawns. They are made to enter from the front gate and leave from the rear gate. I meet one person at a time. I wear double mask to make sure that the virus does not penetrate. And I follow it religiously,” said Sidhu, adding that the kind of exposure he had, he was taking steam once a day and drinking only hot water throughout the day. He is also taking immunity boosters.

Being a health minister, he has been lately making rounds of hospitals. “In the last two days, I have visited hospitals at Barnala and Jalandhar to review the situation. I am also exhorting people to get tested,” he said.

Sidhu has got tested thrice and he has tested negative. “I got my antibody test done only yesterday. But I have not developed antibodies.” He said he gets his staff tested often to ensure that they do not have the virus.

A number of leaders have shifted to mist-based sanitisers with sensors. “I have affixed one on my wall. One does not need to touch it and it releases sanitiser in the form of mist and with such force that it cleanses the space between the fingers too. Hence, we do not have to tell people to sanitise properly,” Bajwa said.

There are others who are making use of Internet to listen to problems of people through video conferencing and WhatsApp videos. Jails Minister Sukhjinder

Singh Randhawa, who is in home isolation after testing positive, has been holding virtual meetings with people in his constituency.

“I have advised them to gather at my house in my constituency, Dera Baba Nanak, in Gurdaspur. There we have put a huge screen and I have an operator who operates the system for us. About 100-150 people join me in video conference every day. They are allowed one by one and they tell me about their problems. I get officers concerned on Zoom and their problems are sorted out.”

Randhawa said this system was working wonders and people were happy that they were able to see the minister and the officer concerned on their screen answering their questions. “I can tell you that this saves so much time. Personally, it takes a day to meet 150 people. They come, they sit with you, you offer them tea and then they tell you about their village. But through virtual meetings, one talks to the point,” he said, adding that he has made the arrangement for Zoom meetings at all three blocks in his constituency.

Food Minister Bharat Bhushan Ashu too is making use of vide conferencing to be in touch with the people in his constituency. “I have a system in Chandigarh and Ludhiana. We try to avoid personal contact but sometimes, we have to meet people. But then it is minimising the exposure. Yet, one has to go out also to be among people. They expect us to be there,” he said.

Congress MLA Amrinder Singh Raja Warring said he was also making use of WhatsApp by having groups and video calls with people. “I have sorted issues of panchayats in my constituency through WhatsApp calls only. I encourage people to send me voice messages and I reply to them in the same way. It works,” he said.

There are others, who feel they need to be among the people. The AAP and SAD leaders are seen organising protests against the government across the state. Youth Akali Dal president Parambans Singh Romana said, “We are just meeting people. I have participated in so many dharnas that I got myself tested for antibodies for Covid and it was found that I have developed them. I never developed any symptom.”