Castigating the KCR government, UPA chairperson Sonia Gandhi said benefits of the right to work popularly called MNREGA introduced by the Congress has failed in Telangana under the TRS regime.

“The development which was supposed to happen has not happened,” Gandhi added.

2018 Assembly elections HIGHLIGHTS:  Kickstarting Congress’ campaign in poll-bound Telangana, UPA chairperson Sonia Gandhi on Friday castigated the TRS government for failing to work on several parameters. “Water, funds, and jobs were the basis of the formation of Telangana. The TRS government has failed to work on these parameters,” Gandhi said while addressing a rally in Medchal.

She said she was saddened to look at the state of affairs in the state. “The development which was supposed to happen has not happened,” Gandhi added. She also pointed out that benefits of the right to work popularly called MNREGA introduced by the Congress has failed in Telangana under the TRS regime. This is Sonia’s first rally ever since the formation of the new state in June 2014.

While Rahul will campaign across the state, Sonia will only campaign in Medchal constituency for the December 7 elections. The Congress is part of Prajakutami — the alliance which also has TDP, Telangana Jana Samithi and CPI. Congress will release its manifesto today.

The election campaign is in full swing ahead of state assembly elections in Madhya Pradesh, Rajasthan, Telangana and Mizoram. Follow HIGHLIGHTS.

Sonia Gandhi and Rahul Gandhi have concluded their speech in Telangana.

Telangana was run by one person: Rahul Gandhi

Telangana was run by one person as per his whims & fancies: Rahul Gandhi#TelanganaKosamSoniaAmma

When the dream of Telangana was being dreamt, Sonia Gandhi stood by with the people of Telamgana: Rahul Gandhi#TelanganaKosamSoniaAmma

Congress, CPI, TDP and TJS have come together: Rahul Gandhi

When you were fighting for Telangana, Sonia Gandhi was standing with you, says Rahul Gandhi. The TRS rule is about to come to an end and for this purpose Congress, CPI, TDP, TJS have come together. The promise that your chief minister could not fulfil, this alliance would do the same. For the past five years, one person ruled over Telangana. The govt that will be formed in the future would not work for one person but for the people.   This alliance will provide the people of the state with employment and change the state for good.

Water, Funds & Jobs were the basis of the formation of Telangana. The TRS government has failed to work on these parameters: Sonia Gandhi#TelanganaKosamSoniaAmma

I am saddened to look at the state of affair in Telangana: Sonia Gandhi

Water, Funds & Jobs were the basis of the formation of Telangana. The TRS government has failed to work on these parameters: Sonia Gandhi#TelanganaKosamSoniaAmma

Water, Funds & Jobs were the basis of the formation of Telangana: Sonia Gandhi

Earlier when I used to meet the women in Telangana, I used to feel proud. Whenever I used to visit other states, I used to speak about Telangana with pride. But it is very sad, that the present government has not been able to work upon women upliftment. We had to face political consequences because of the formation of Telangana. In spite of this, we went ahead and carved out Telangana.

We were aware of the pain Andhra had to go through during the formation of Telangana, so we introduced policies specific for Andhra, including special category status. We had decided to give Telangana a special category status. I want to tell Andhra Pradesh, that all the promises made Congress, especially the special category status stand today. I am very sad to see the state of affairs in the state.   I ask you the promises made to you, how many have been fulfilled? Has the government taken any steps for you? The new state was formed so that people would get water, employment, however, people have committed suicide. People could not even avail the benefits of the Mnrega scheme. People of Telangana are still looking for employment.

I feel like a mother who sees her son after a long time: Sonia Gandhi

First in four years,  since the formation of Telangana, Sonia Gandhi takes centre stage at Medchal and addresses a gathering.

"I am so happy today like a mother feels when she meets her long-lost son. I remember how difficult it was to get a separate state. It was not an easy task. You gave Manmohan, Rahul and Congress strength so we could take such a big decision," says Sonia Gandhi.

Sonia Gandhi to address in Telangana

Sonia Gandhi will be addressing a gathering in Medchal, Telangana shortly. Stay tuned.

This is the battle for MP's future. Youth, farmers and women of Madhya Pradesh have decided to make Congress victorious, says Rahul Gandhi while addressing people in Sehore, Madhya Pradesh.

Acres of land is snatched from farmers, they do not get any MSP. Shivraj Chouhan govt steals land from farmers and Aadivasis. UPA govt introduced Land Acquisition Act to prevent illegal and unfair land acquisition but this is policy is not implemented by BJP in MP.

The youth is well aware that in order to pass an exam, bribe or cheating would suffice. Mr. Modi broke protocol and rules to hand over 30,000 Cr Rafale deal to his friend Anil Ambani. That is why people say, 'Chowkidar chor hai'.

What kind of a fight is this against black money, where innocent are standing in a line, while all thieves are converting their black money to white from backdoors. This is the battle for MP's future. Youth, farmers and women of Madhya Pradesh have decided to make Congress victorious.

Why defamation not filed in cases of illegal mining, e-tendering, Gandhi asks

On one hand there is Shivraj Chouhan, who has been CM of MP for 15 years and enjoys all power and resources. On the other hand, there is Congress who represents the voice of people," says Rahul Gandhi while addressing people in Sehore, Madhya Pradesh.

A few days ago, I said by mistake that Shivraj ji’s son is involved in Panama papers.Within a minute, he said he’ll file defamation case.When I talk about Vyapam,e-tendering,illegal mining& mid-day meal, why don’t you file defamation? It means there is truth in them: Rahul Gandhi pic.twitter.com/2htouiPNOu

In pictures: Narendra Modi in Mizoram 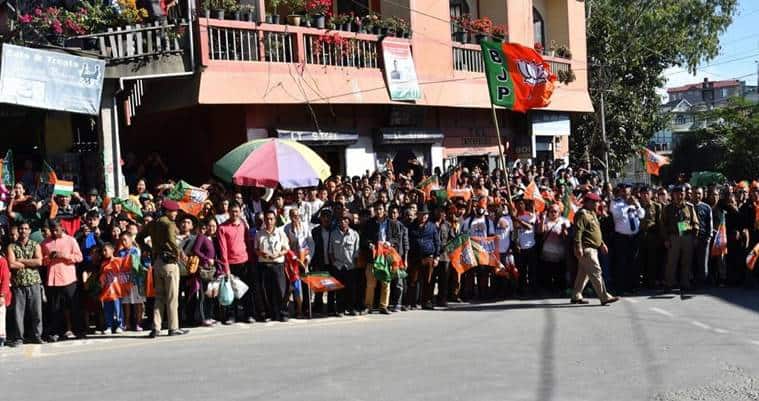 'Has Rahul baba taken a bull for ploughing,' asks Shah in Madhya Pradesh

"Rahul baba shouts for farmers, has Rahul baba ever taken the reins of a bull for ploughing," asks Shah. "During your time, farmers were getting beaten up for availing urea. Modi government instead shut the black market through neem coating the urea. Now farmers don't have to stand in que for urea," says Shah.

"The BJP led by Modi ji has made Shivraj Singh Chohan the candidate for the position of chief minister," said Amit Shah while addressing the public at Balaghat, Madhya Pradesh. "It is the people of Madhya Pradesh to decide which government should be formed in the state. You have seen Congress working where there was lack of electricity, while Shivraj Chouhan has worked to provide electricity in each household," said Shah.

Congress called local attire given to me by northeast people as 'outlandish': PM Modi in Mizoram

"The work culture of Congress has caused many projects to be delayed, leading to crumbling infrastructure in the state," Modi addressed the people in Mizoram. "However, the neighbouring states have excellent infrastructure. Unsurprisingly, the Chief Minister of Mizoram is also the PWD minister of the state for years," said Modi.

"The Congress leaders have utter disregard for the Northeast which is evident from their insult of the Northeast attire. They went on to call local attire, given to me by the Northeast people, 'outlandish'," Modi said while addressing people in Aizwal, Mizoram.

The work culture of the Congress has caused many projects to be delayed, leading to crumbling infrastructure in the state. However, the neighbouring states have excellent infrastructure. Unsurprisingly, the CM of Mizoram is also the PWD minister of the state for years: PM Modi pic.twitter.com/wAcjE7hC23

Where would Rahul Gandhi be after November 28, the day voting day in Madhya Pradesh," asked Shivraj Chouhan while addressing public in Satna. He stays abroad more than in the country, Chouhan further said.

The results are to be announced on December 11.

Battle lines have been drawn for the November 28 Madhya Pradesh elections in which 2,907 candidates will be into the fray from 230 assembly seats. Both Congress and BJP have announced a slew of welfare measures in their respective poll manifestoes for the poll-bound states.

Elections in Telangana will be held on December 7.