Assam NRC Final List 2019 HIGHLIGHTS: Senior BJP leader and Assam Finance Minister Himanta Biswa Sarma, in an exclusive interview to The Indian Express, said the list that has excluded over 19 lakh people, is “erroneous” as “more illegal migrants should have been excluded”.

National Register of Citizens (NRC) officers attends to people in an NRC centre on the outskirts of Gauhati. (AP)

Assam NRC final list 2019: Assam’s final National Register of Citizens (NRC) was published Saturday. Of the 3.3 crore applicants, over 19 lakh were excluded from the final list. The NRC is an exercise to identify Indian citizens living in Assam, a state marked by illegal migration from Bangladesh. Those excluded from the list will get an opportunity to file appeals and be heard in the Foreigners’ Tribunals (FT).

At least 2,500 NRC Seva Kendras (NSK) offices have been set up across the state for people to check the status of their applications today, between 10 am and 4 pm. The status can be also be viewed online at the NRC website (www.nrcassam.nic.in).

The ruling BJP, which has been passionately advocating for the NRC for decades, is not happy with the list. Senior BJP leader and Assam Finance Minister Himanta Biswa Sarma, in an exclusive interview to The Indian Express said that the list that has excluded over 19 lakh people, is “erroneous” as “more illegal migrants should have been excluded” and that the party’s fight to “exclude every single foreigner” from the state will continue.

My heart goes out to all those, especially the large number o Bengali-speaking brothers and sisters, who are made to suffer because of this botched-up process.

The ruling BJP Saturday said they do not trust the updated National Register of Citizens, specifically prepared for Assam, and appealed the party governments, both at the centre and the state, to make a nationwide NRC. "We do not trust this NRC. We are very unhappy. We appeal the central and state governments to prepare a national level NRC," BJP Assam President Ranjeet Kumar Dass said.

"The AICC noted that there was sufficient circumstantial evidence to indicate that the 19,06,659 people, who have been excluded from the final NRC, included many genuine Indian citizens, cutting across linguistic and religious lines," a party statement said here. The names of some members of a given family were included in the NRC, but one or two specific members of that family have been omitted despite submitting the same legacy data, it added.

NRC should be implemented in Bengal too : Dilip Ghosh

West Bengal BJP president Dilip Ghosh Saturday demanded implementation of NRC in the state to drive out Bangladeshi Muslims for the sake of internal security of the country. "We demand that just like Assam, NRC should also be implemented in Bengal. If the TMC government is not willing to bite the bullet, we(BJP) will implement it and drive out Bangladeshi Muslims from the state after we come to power in 2021," he told reporters here. (PTI)

TMC opposes, says Centre will have to take the responsibility of those excluded

The Trinamool Congress Saturday hit out at BJP government at the Centre for allegedly trying to drive out Bengalis from Assam in the name of NRC and said it will have to take the responsibility of the 19 lakh applicants who failed to make it to the final list. West Bengal Chief Minister Mamata Banerjee has expressed concern over 19.07 lakh people being left out of the final NRC list and said "People have been rendered homeless in their own country", senior TMC leader Firhad Hakim said. (PTI)

The Assam government Saturday claimed many genuine Indian citizens have been left out of the final National Register of Citizens (NRC), but said they do not need to panic as they have option to appeal in the Foreigners Tribunal (FT). Speaking to PTI, Assam Parliamentary Affairs Minister Chandra Mohan Patowary, said the government will provide legal support to the Indian citizens not finding place in the NRC list. "One thing is sure that many genuine Indians were left out of the NRC. However, they don't need to panic and worry. They can appeal in the FTs," Patowary said.

Security beefed up in Mizoram after NRC publication

Security was beefed up in Mizoram and police stations and border outposts along the 123 k Mizoram-Assam border were alerted on Saturday in view of th publication of the National Register of Citizens (NRC) in neighbouring Assam, Mizoram Inspector General of Polic (Headquarters) John Neihlaia said. (PTI)

'We were so scared earlier. Very relieved'

Naseeruddin Choudhry a local resident says, “My daughter Najmin  (7) and nephew, Masoom (8) were both out. Now they are in — we were so scared earlier. Very relieved. “ Two sisters Kalpana Das and Dipa Das in front of an NSK checking their documents. Dipa made it but Kalpana did not. “If my sister is there, how can I not?” asks Kalpana. 'I believe they might take me there. Now let’s see what happen'

Mohendra Das, a daily wager in Tarapur, has not made it to the list. He says he doesn’t know what the NRC is but knows of a camp. “I believe they might take me there. Now let’s see what happens.” 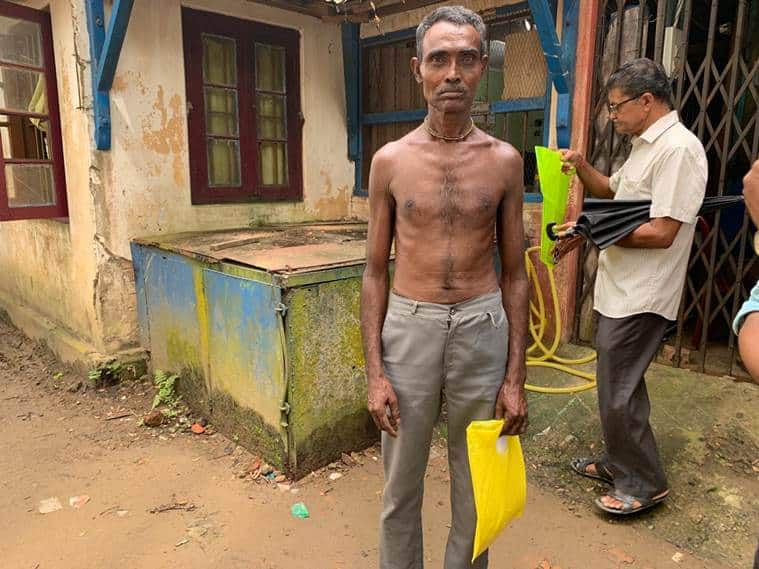 Not happy with final NRC, there is a scope of review in Supreme Court

Asom Gana Parishad has said that it is not happy with the NRC list and that there is further scope for a review in the apex court. (PTI)

'Keep calm and be patient'

At an NRC Seva Kendra in southern Assam a sign telling people — effectively 19 lakh of them — to “keep calm and be patient” as they find their names out of the NRC. @IndianExpress pic.twitter.com/VdBV5APrlb

The Assam Public Works (APW), the original petitioner in the Supreme Court which led to the updation of the National Register of Citizens six years ago, called the final NRC a "flawed document" as its prayer for re-verification of draft NRC was rejected by the apex court. The NGO also wondered whether the software used in the updation exercise was capable to handle so much data and if it was examined by any third party Information Technology expert, APW president Aabhijeet Sharma said.

"The Final NRC has made it obvious that the problem of illegal immigration will never be resolved in Assam. Had it been completed flawlessly, it would have been a golden chapter in Assam's history," Sharma told reporters after the final NRC was released, excluding names of over 19 lakh applicants. (PTI)

Every section of Assam is unhappy with the status of NRC: Gaurav Gogoi

Congress leader and former Assam chief minister Tarun Gogoi's son Gaurav Gogoi also took to Twitter to say, "Every section of Assam is unhappy with the status of NRC. Even BJP ministers are complaining. Careless implementation that many genuine Indian citizens will have to unnecessarily face the courts. Congress will provide all help. Nation above politics is our motto. NRC is another."

Every section of Assam is unhappy with the status of NRC. Even BJP ministers are complaining. Careless implementation that many genuine Indian citizens will have to unnecessarily face the courts. Congress will provide all help. Nation above politics is our motto.

No genuine citizens should be excluded from NRC list: Congress' Adhir Ranjan Chowdhary

Adhir Ranjan Chowdhary: "We are saying that no genuine citizens, irrespective of any caste and religion, of our country, should be excluded from the NRC list. And they should get security. These are the two things we want."

BJP should stop asking for NRC throughout the country in terms of Hindus and Muslims: Owaisi

Reacting to the final NRC list, AIMIM's Asaduddin Owaisi,said, "BJP should learn a lesson. They should stop asking for NRC throughout the country in terms of Hindus & Muslims. They should learn from what has happened in Assam. The so-called myth of illegal migrants has been busted." He also said, "I have my own doubts that the BJP through Citizen Amendment Bill can bring a bill wherein they can try to give citizenship to all non-Muslims, which will again be a violation of Right to Equality." Reacting to the final NRC list, Congress leader Shashi Tharoor said, "There is a thin line between nationalism and xenophobia —besides, hatred of the foreigner could later turn into a hatred of Indians different from oneself." -- Rabindranath Tagore. The prescience of a great man!"

"There is a thin line between nationalism and xenophobia —besides, hatred of the foreigner could later turn into a hatred of Indians different from oneself." -- Rabindranath Tagore. The prescience of a great man! #NRC

While Congress' first reaction came with the party's Thiruvananthapuram MP quoting Rabindra Nath Tagore. "There is a thin line between nationalism and xenophobia —besides, hatred of the foreigner could later turn into a hatred of Indians different from oneself." -- Rabindranath Tagore. The prescience of a great man!" he tweeted.

A day before the final list, Chief Minister Sarbananda Sonowal had said, “As long as the appellant’s plea remains sub-judice with the Foreigners’ Tribunal, he or she cannot be treated as a foreigner,” he said, appealing to people to maintain peace, adding that the NRC was “an outcome of the untiring efforts of the thousands of people”.

Assam NRC Final List 2019: How to check if your name is on National Register of Citizens

On Friday, the Assam government stepped up security across all districts and assured people that those excluded will not automatically be considered “illegal foreigners”. Assam DGP Kuladhar Saikia told The Indian Express: “Everything is peaceful and calm, and situation is very normal. A total of 218 companies of additional security forces are being deployed and if any objectionable social media post is brought to our attention we will take strict action.”

Explained: Who is an Indian citizen? How is it defined?

The final draft NRC included 2.89 crore of the 3.29 crore applicants, and left out over 40 lakh people. Over 36 lakh of those left out, had filed “claims” against the exclusion and of the 2.89 crore included, objections were filed against around 2 lakh people. On June 26 2019, the draft exclusion list came out in which 1.02 lakh of the 2.89 crore people, who were all given a chance to appeal their cases, were excluded.