As Gehlot fights crisis, I-T and ED raid premises of his close associates 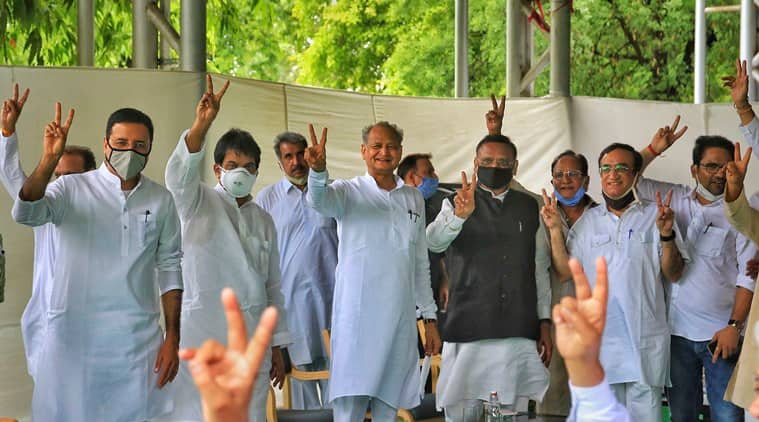 AS RAJASTHAN Chief Minister Ashok Gehlot tries to stave off a political crisis to save his government following a showdown Sunday by Deputy CM Sachin Pilot, the Income-Tax department carried out search and survey operations in 43 premises in Jaipur, Kota, Mumbai and Delhi of businesspersons and associates close to him.

RK Sharma is also the promoter of Triton Hotels and Resorts Private Limited, which runs Fairmont, a luxury hotel in the outskirts of Jaipur, which was also raided by the Enforcement Directorate on Monday. It is in this hotel where the Gehlot camp herded its MLAs after the culmination of the Congress Legislative Party meeting on Monday.

Sources in ED claimed Sharma was summoned by the agency four days ago to explain an alleged receipt of Rs 96.7 crore into Triton from Mauritius. According to RoC records, a Mauritius-based company Sivnar Holding Limited owns 50 per cent in Triton, while Ratan Kant Sharma and his wife Jui Sharma own the remaining 50 per cent. He could not be reached for comments.

The I-T department also carried search and survey operations at the residence and properties of state Congress Vice President Rajiv Arora, founder and owner of Amrapali Jewels, and Dharmendra Rathore, also an AICC member, both said to be close aides of Ashok Gehlot.

When contacted, Arora said, “I don’t know how many locations (are being raided). I am at my home and they are working here and I am cooperating with them,” he said. Arora has been a Congress member since his student days, contested Assembly elections once from Jaipur, but lost. He has also been the Chairman of Rajasthan Tourism Development Corporation (RTDC).

Rathore was Chairman of Rajasthan State Seeds Corporation as well as a Secretary in the state unit of Congress party. He is considered one of Gehlot’s political managers, especially in handling the Rajput community. His mobile phone was switched off and he could not be contacted.

The I-T raids were also conducted on some properties of the Om Kothari group, including Om Metals; BJP has long alleged that Kotharis were close to Gehlot. The group is involved in many businesses including hotel, hydro power projects, metal and auto sectors.

In a press statement, the Central Board of Direct Taxes said, “The Income Tax Department carried out search and survey operations on three groups on 1.07.2020. These operations are being carried out at 20 premises in Jaipur, 6 in Kota, 8 in Delhi and 9 in Mumbai.” It did not name the groups, but described their business activities and the line of investigation.

State government sources in Jaipur said the state police were not informed of the raids.

AICC spokesperson Randeep Singh Surjewala termed the I-T, ED and Central Bureau of Investigation as “BJP’s three frontal organisations.” “Whenever BJP has to murder democracy, BJP’s these three departments are the first ones to come forward. Since last night, these departments have again arrived in the brave land of Rajasthan to show cowardice,” Surjewala said.

State Transport Minister Pratap Singh Khachariyawas said that the other camp did not have numbers “hence the I-T raids are being conducted.”